YOUNTVILLE, Calif. — Daimler Trucks North America (DTNA) announced today the availability of its new Detroit DD5 engine in the Freightliner M2 106 medium-duty truck, which the company says will bring the benefits of integrated powertrains to the segment.

Richard Howard, senior vice-president of sales and marketing, told journalists this morning that the new engine launch was inspired by customer demand.

“We have full integration in the Class 8 market and all the benefits that has brought to our customers. Customers were asking for choice in the medium-duty market,” Howard explained. “We are mainly customer-driven in terms of bringing something to the market that isn’t a me-too product.” 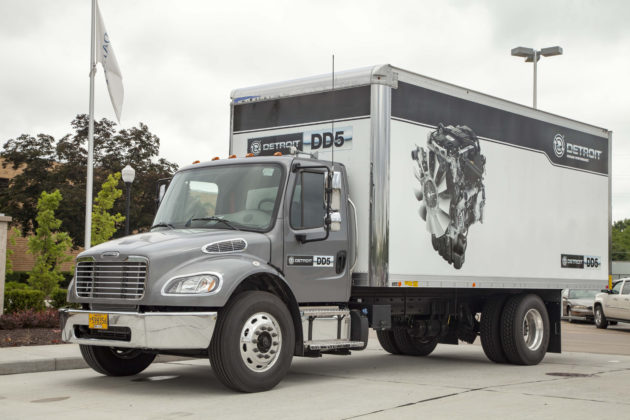 Daimler has benefited from the move towards vertically integrated powertrains in the heavy-duty segment, where it now has Detroit engines installed in more than 90% of the trucks it builds. It has also seen a faster than expected uptake of its DT12 automated manual transmission, which is now ordered in about 70% of its trucks.

But developing the DD5 for the North American market was no small task. Daimler has invested US$375 million into configuring its Detroit plant to bring production to North America and it took a significant amount of work to adapt the base engine – available in Europe for three years – for North American duty cycles.

“It’s a big commitment to bring an engine into this market,” said Kary Schaefer, general manager, marketing and strategy with DTNA. “We took the commitment very seriously and we took a cautious approach to the market.”

Initially, the DD5 will be offered only in the M2 106 and in certain pickup and delivery applications, with production commencing in October. Power ratings will include 210 hp/575 lb.-ft. of torque and 230 hp/660 lb.-ft. Schaefer said the engine has undergone more than three million miles of testing and the company is confident it will bring a 3% fuel economy improvement compared to current engine offerings, even taking into account enhancements the competition is likely to be developing.

The DD5 is a four-cylinder design, but Schaefer emphasized the engine is capable and robust. Detroit is touting a B10 life of 400,000 miles, meaning only 10% of engines built will need significant work by the 400,000 mile mark. 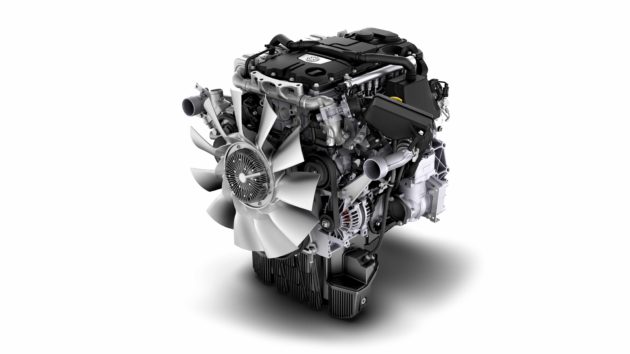 “As a testament to our confidence in the DD5, I am excited to announce we are backing it with a three-year/250,000-mile engine and aftertreatment system warranty,” said Schaefer.

She explained the four-cylinder design reduces parts complexity and provides sufficient performance and power, while also allowing easier access to the rear of the engine. The company is also extending service intervals.

Engine oil and filter changes don’t have to be done until the 45,000-mile mark. Diesel particulate filters (DPFs) can go 200,000 miles between cleanings and the diesel exhaust fluid (DEF) filter only needs to be replaced every 300,000 miles or three years.

“These are the longest service intervals for a comparably spec’d engine,” Schaefer said.

The crankcase is designed from cast iron eliminating the need for cylinder liners. Ribbing gives the crankcase extra stiffness and helps reduce weight.

“The aftertreatment performs better when temperatures are hot,” she noted.

The two stage engine brake can provide 180 and 220 braking horsepower, which Schaefer noted is nearly 50% better than that offered by competitive engines.

The DD5 is already compliant with Phase 2 of the EPA/NHTSA greenhouse gas emissions regulations. In 2018, production of the engine will shift from Germany to the US. At that time, DTNA will expand the applications in which the engine is approved for. It will also bring to market a DD8 engine in 2018.

Several trucks powered by a DD5 engine were made available for test drives. Driving impressions will follow. 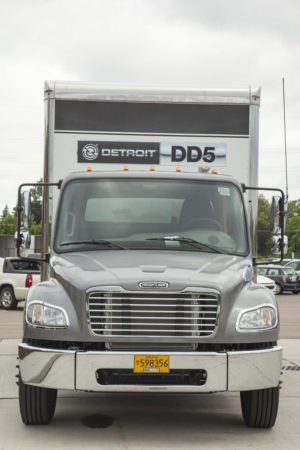