Volvo looks to bring its success in Canada to Mexican market

PUEBLA, Mexico – Volvo Trucks North America (VTNA) president Peter Voorhoeve could not be happier with the continued progress his company has made in the Canadian market.

While looking to expand its footprint in Mexico with the GHG17 engine and improved connectivity offerings, Voorhoeve told Truck News-West that since the GHG17 engine was introduced in Canada two years ago, nearly 10,000 units are now on the road.

“If we look at the market shares in Canada, it has been very good,” said Voorhoeve. “They are growing; we are now at 13.9%. We are growing at a percent year-over-year.”

“I think the truck itself is very competitive in terms of features versus the competition,” he said. “The driver environment is excellent, and I don’t say this just to sell you, but what we hear is that drivers prefer this truck over other trucks.”

Voorhoeve believes Volvo’s VNR regional truck is vastly superior to its previous VNM model series, and the evidence can be seen in Canadian sales numbers.

“That was maybe not the best regional truck,” Voorhoeve said of the VNM. “This VNR is a bullseye, and you see our trucking share in regional going up.” 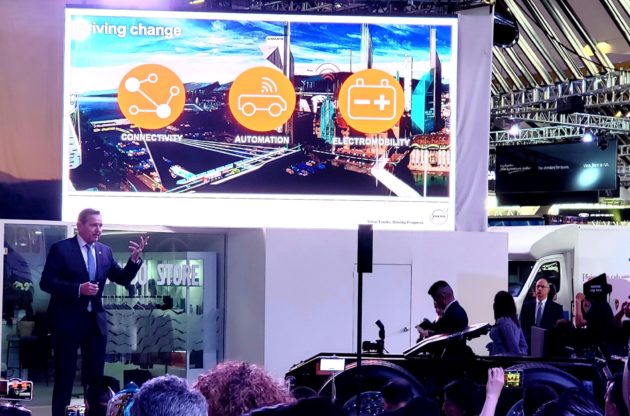 Another factor contributing to Volvo’s continued success in Canada is a growing dealer network.

“I’m very happy with the dealer network in Canada. Not only did it expand, but it also is continuously reinforcing,” said Voorhoeve, pointing to the recent opening of Calmont Volvo Truck Centre in Calgary, Alta., as an example. “Their service capacity increased enormously. You see continuous improvements and developments in the dealer network and I think that’s one of the reasons that our market share is going in the right direction.

“For me Canada is really becoming a success story.”

Volvo launched its new VNL and the VNR model series trucks into the Mexican market two years ago with the Volvo D11 and D13 engines meeting U.S. Environmental Protection Agency (EPA) 04/Euro 4 emission standards. At the time, the GHG17 engine, which meets 2017 EPA emission standards, was an available option for fleets with access to low-sulfur diesel and diesel exhaust fluid.

But Volvo is looking to up its game in Mexico with the GHG17 engine and from its 3.4% market share in the country.

During the Expo Transporte truck show in Puebla, Mexico, Oct. 15, Voorhoeve said his company is “reinforcing its position in Mexico with these strong trucks,” as well as the expansion of the GHG17 engine technology.

“We believe that Mexico requires new state-of-the-art technology…we owe it to ourselves and we owe it to our families,” he said, speaking of the importance of protecting the environment for generations to come.

Jurado said Mexico requires more technology and that the GHG17 truck will “create the future and not wait for it.”

Currently, there are 249 GHG17 units that have been sold in Mexico, and with the recent expansion, the goal of Volvo is to continue to “take care of the environment” and sell more GHG17 trucks into the Mexican market.

Volvo also released its Remote Programming technology and telematics platform to the Mexican market, which has been available in Canada and the U.S. for several years. Remote Programming provides software updates while on the road, eliminating downtime for the purpose of updates to powertrain control unit software.

In addition, the technology offers parameter updates, previously only available in the U.S. and Canada. Updates include transmission performance mode, max road speed limit, and max engine speed, among others features.