A New Year, A New Fluid

February 1, 2010
SARNIA, Ont. - As the first trucks equipped with selective catalytic reduction (SCR) systems hit the highway, a company with a strong Canadian connection is setting the stage to become a major supplie...

COMPLETE CONTROL: DEF produced at Terra’s plant near Sarnia leaves aboard the company’s own tankers and rail cars to ensure it remains on spec’. 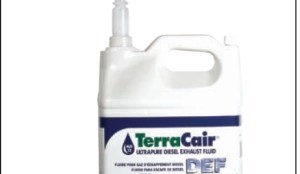 PERFECT PACKAGING?: TerraCair DEF comes in packaging that includes a plastic nozzle to ensure the product is not compromised when it’s poured into the truck’s DEF tank.

SARNIA, Ont. –As the first trucks equipped with selective catalytic reduction (SCR) systems hit the highway, a company with a strong Canadian connection is setting the stage to become a major supplier of the fluid that will help keep these trucks running.

At its sprawling manufacturing facility near Sarnia, Terra Environmental Technologies is already producing vast quantities of its TerraCair diesel exhaust fluid (DEF) which is now arriving on truck stop shelves in containers of various sizes. What makes Terra unique is that it claims to be the only DEF supplier that manufactures the fluid and then manages the entire supply chain, providing a complete “well-to-tank chain of custody,” Barry Lonsdale, president of Terra Environmental Technologies told Truck News during a recent visit to the plant.

“We warranty our product from the gas well to the tank of the vehicle,” Lonsdale explained. “We have dedicated tankers to handle this stuff, we have over 5,000 rail cars in our rail fleet and that’s going to expand dramatically, and we’re developing a terminal network across North America.”

The company says most other DEF suppliers source the fluid from a urea producer, dilute it and then label it as their own -but that raises concerns about the integrity of the product. When choosing a DEF supplier, Lonsdale said fleets should demand to see a Certificate of Analysis and ask some questions of their supplier.

“If their supplier can’t walk them through where they’re buying it, how they’re certifying it and how they’re managing it, then they probably want to be careful,” Lonsdale warned. “We don’t want to create a situation where everybody is running around panicking and saying this can’t be done. It can be done, and it can be done very cost-competitively. But the consumer needs to recognize and understand that all the links in that supply chain are the fluid that they buy.”

DEF is a tightly-managed urea specification. Simply put, DEF is urea that’s been diluted to 32.5% with demineralized water. However, the API specification is extremely stringent, not unlike a pharmaceutical grade product, pointed out Terra’s director of marketing, John Lounsbury.

“You can’t have any impurities that either clog the filters or lay down on the catalyst,” he explained. “If you’re not buying that high spec’, you’re likely going to challenge your SCR system.”

OEMs are reportedly anxious about the harm low-grade DEF can wreak on their costly aftertreatment systems. Inferior DEF can foul injectors and clog filters within the SCR system, rendering it ineffective, taking the vehicle out of compliance with EPA2010 tailpipe requirements and resulting in downtime.

“The licensing of (OEM) technology is based on them hitting certain tailpipe numbers and the (DEF) spec’ is an integral part of that design,” Lonsdale pointed out. “The failure of the product to meet that spec’ puts their whole (EPA) licence at risk.”

The API’s ISO 22241 specification sets the standard for DEF quality. However, Terra has found that even the stringent ISO specification allows for certain impurities such as formaldehyde, which Terra says can interfere with hydrolosis and cause thermal decomposition.

“Every OEM we talk to doesn’t want it in there,” Lonsdale said of formaldehyde. “We made a very clear decision about five years ago to eliminate formaldehyde because we were seeing issues in hydrolosis in our stationary business.”

(It’s a little known fact that massive stationary SCR systems have been used to purify smokestack emissions at big factories for years now).Another issue regarding DEF concerns the fluid’s handling by end-users. Terra’s Lounsbury said the company has seen product hitting store shelves without a means to get the fluid into the vehicle’s DEF tank without the potential for contamination. It seems as much thought went into the packaging of TerraCair as in the development of the fluid itself. All containers come with a single-use dispenser that’s cleverly concealed behind the jug’s plastic wrapping.

“You can’t have a bottle out there without a means of getting it from the bottle into the tank,” added Lonsdale.

TerraCair comes in containers that are vented to allow for easier fill-ups. Lounsbury said the company’s 2.5-gallon jug empties in just 26 seconds while an unvented container of the same size (weighing as much as 25 lbs when full) takes 2.5 minutes to pour.

TerraCair is available in a wide variety of sizes ranging from one-and 2.5-gallon jugs at truck stops up to bulk quantities for fleets. The company has partnered with Brenntag to provide dispensing equipment for retailers and fleets. Lonsdale said the company aims to offer the right solution for customers of all sizes.

“This process has to be flexible because every customer is going to have slightly different needs,” Lonsdale reasoned. “Our program is designed to provide customers with the mix of products, mix of equipment and the financing around all that to meet their needs as they invest in their fleets.”

While Lonsdale said he understands customers will select a DEF supplier based partly on price, he urged them to look beyond the price tag.

“Clearly, a cost component is there,” he said. “But they need to understand the supply chain itself; where is this product coming from and how is it managed?”

Lounsbury warned that “there are a lot of people today that are viewing this as an opportunistic business to be in,” and may not have the quality control measures in place.

And as for price, Terra remains confident it can supply the industry today with DEF that costs roughly the same as diesel fuel. Economies of scale will likely bring price down further as more EPA2010-compliant trucks hit the road. As demand for DEF increases, Lonsdale said Terra is confident in its ability to ramp up capacity, noting the company is investing $200-$300 million into its manufacturing facilities “to ensure we have the capacity available to supply this product over time.”