VANCOUVER, B.C. — There’s a piece of Canadian trucking history that many people have forgotten, and several newcomers to the industry never realized.

A few decades ago, Vancouver-based truck manufacturer Pacific Truck built the biggest and baddest rigs on the road. 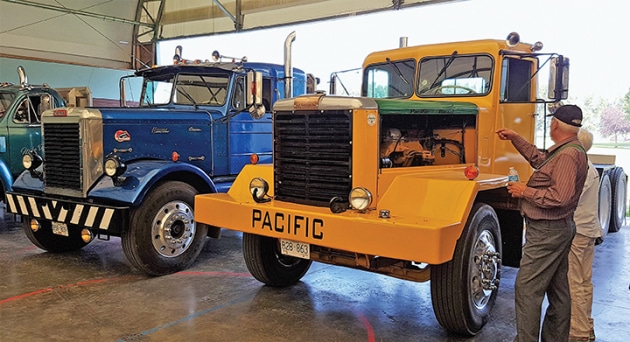 Because a group of former Hayes employees started the company, Pacific produced trucks that looked similar to counterpart, but with the same attention to detail.

McNutt is a wealth of knowledge when it comes to Pacific Truck, having worked for the company for several years.

He started with Pacific in North Vancouver stacking heavy steel wheel rims in the yard, and then got into material handling, moving raw materials to various work stations, which gave McNutt insight into several aspects of the business.

“It exposed a lot,” he said, “and then I was asked if I wanted to come up into the front office into parts sales.”

Now managing the export desk, and much of the Pacific division of its parent company, they no longer manufacture trucks, but they were a common sight in the ’70s and ’80s, hauling logs in B.C.

The main aspect of the business today is building parts and pieces for maintaining Pacific trucks.

“Anything on the Pacific is designed in-house, blueprinted in-house, and built in-house,” said McNutt.

The parts you would find on a Pacific are similar to what you would see on a Kenworth or Hayes truck, but, as McNutt described, are “bigger and beefier.”

“Especially on what we call the ‘fat trucks,’” said McNutt. “The big P12s and P16s, the big off-road loggers, everything was Pacific.”

During the ’70s and ’80s, Navistar (then referred to as International Harvester, or IH) owned Pacific Truck.

It was during that time that IH released a highway model of a Pacific – the P500. Some were made of fiberglass, which McNutt said didn’t work out so well because they shook and bounced on the road.

“Anyone at Pacific, it was not our favorite,” admitted McNutt. “We were all about the big steel and the big iron. Putting a Pacific on the highway, it would out haul anything, but not legally…the truck is too heavy. Our trucks were built to last forever and they were built for off-road.”

Pacific trucks were always intended for off-road, with the cream of the crop being the P12 and P16, and its highway model never took off.

“That’s what we built our reputation on,” said McNutt, “so when IH bought us and had us do this smaller version, for the diehard Pacific guy, there was some friction.”

Dave Stewart is the owner of Coast Powertrain, which owns the heritage side of Pacific Truck, meaning anything that deals with the trucks that were manufactured back from day one of the company.

Pacific Truck and Trailer still exists and is located in Edmonton, Alta.

Stewart’s father started Coast Powertrain, originally called Stewart Truck Parts, in 1973. He took on a group of partners in the mid-’80s (changing the name to Coast Powertrain), bought them out in 1990, and purchased the Pacific Truck division in 2001.

At the time, Pacific was winding down the manufacturing side of the business and propping up the parts distribution division, focusing primarily on parts by early 2000.

Pacific Truck is a small portion of Coast Powertrain’s business, which manufactures transmissions, drivelines, differentials, and the entire powertrain on predominantly heavy trucks.

“Unfortunately, (Pacific trucks) are a bit of an extinct dinosaur,” said Stewart. “But they sure did the yeoman’s work on the island. There were unbelievable weights they were carrying.”

Stewart’s father emigrated from Ireland and quickly realized that large, heavy-duty trucks were where the money was. He was heavily involved in the lumber industry on the powertrain side in the 1970s.

“He loved the Pacific and the Hayes (trucks),” said Stewart. “That’s where he cut his teeth back in his youth. He was the heartbeat around here for the heavy trucks, and that’s why he was interested in picking the Pacific project up when it became available.”

“We kept it going in his honor,” said Stewart, “and Larry does a great job.”

Doing rebuilds is a big part of what Pacific Truck does today, and McNutt said they will only work on trucks that are worthwhile.

Some customers – which come from all over the world – look for rebuilds that will enable them to show their Pacific truck, while others want them restored to full working condition.

“Some of our rebuilds are well over 15 years, and pushing 20 on the rebuilds,” said McNutt, adding that the average lifespan of a new Pacific truck is around 40 years.

Pacific trucks were in high demand in Western Canada, Quebec, and overseas, with the U.S. a smaller market for the heavy-duty hauler.

Because they are hand-built, Pacific trucks could take up to three months to finish. They could also be tailor-made for a customer’s needs.

“We did a lot of one-of-a-kind (trucks),” said McNutt. “We built a pair of trucks for Boeing Aerospace and shipped them to (F.E.) Warren Air Force Base in ’86, designed to haul silo missiles around.”

Still located in Vancouver, Pacific Truck Manufacturing is the only location in the world for genuine Pacific parts.

“Clients in our business hate those (new) engines,” he said. “They have nothing good to say. If you’re pulling a hundred tons on log or more, you’re on an 8% grade, and you fire it up, you need to go up.

“If we build brand new, with a new VIN number, by law we have to put in tier four engines, DEF exhaust, computer controls, and emission controls. On the old VINs, we can grandfather the old power plans.”

Today’s logging trucks are built differently for an ever-changing industry. They are manufactured for second growth trees, all around the same size, smaller than first growth, which is what Pacific and Hayes trucks were hauling.

Times change, and the trucks have changed as well. But Canada, particularly B.C., can take pride in knowing that at one time it produced the toughest trucks on the market.