MONTREAL, Que. — A downtown Montreal railway underpass, first built in 1888, had long been a target of errant trucks hitting the 3.75-meter high structure until, that is, a sensor warning system was installed six years ago.

But, as City of Montreal and railway officials have noticed, there’s no way to prevent all collisions, especially since a recent spate of accidents has resulted from trucks heading northbound along busy Guy St., not southbound where the sensors exist. 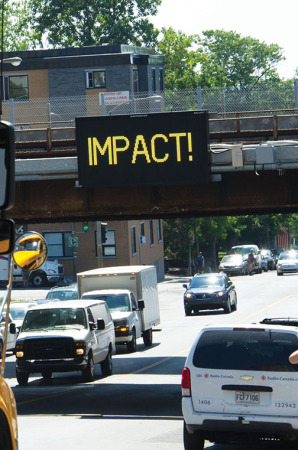 The answer is simple, said City of Montreal spokesman Phillippe Sabourin. The southbound lanes are still open to trucks – providing they’re the right size – but the northbound lanes have long been closed to trucks.

The bridge height on both sides is the same 3.75-meter clearance but the road access is so awkward going north and the bridge profile so low, it has been pointless for trucks to use it, he said.

“Obviously, it’s closed because we have many signs” indicating that, Sabourin said. “There’s (one with) a truck with a red circle so it’s clearly announced that it’s not a truck road. But still some of them try to pass by in a Guy north direction and then they hit the underpass.”

That problem used to exist for trucks heading south on Guy St., moving out of the central business district and towards the St. Lawrence River and major east-west arteries and truck routes like St. Antoine and St. Jacques streets.

At one time, as many as 50 trucks a year heading south used to crash into the bridge, which used to carry Canadian Pacific passenger trains into former Windsor Station and now carries Exo (formerly AMT) suburban commuter trains to Lucien L’Allier station.

But the southbound problem was solved six years ago by an enterprising City of Montreal engineer. Driving home one day and aware of the problem of trucks hitting the less-than-regulation height (4.3 meters) underpass, he pulled into the driveway of his home and pressed the button to open the garage door. And he thought, why couldn’t a similar system be installed to warn trucks?

The technology consists of lasers placed at a location south of Rene Levesque Blvd. When an oversized truck passes through the lasers a sign on the bridge lights up with an electronic graphic showing a truck hitting the bridge and the message: Impact!

“It’s a bilingual word so Canadian and American truckers could easily understand what’s going to happen if they continue,” Sabourin said. “So, most of them stop right away.”

The city has also set aside physical space where an errant truck can turn around and head out of the danger zone.

Sabourin said the system has virtually ended southbound crashes – only six have occurred since 2012.

And, financially, it was a much more economical solution than having to reconstruct the underpass – $150,000 compared to millions of dollars and massive disruption of commuter train service. The bridge carries 55 trains a day and more than 13,000 passengers.

Nevertheless, when an errant truck does hit the bridge – whether southbound or northbound – commuter trains must halt before they can cross the structure.

The collision is captured on a closed-circuit TV, and rescue crews are dispatched, and the truck removed. Then the bridge and train tracks undergo inspection before trains can use them again.

“These inspections are taken very seriously by our trained staff,” Sabourin said. “They do lead to serious delays (for rail commuters) every time a truck crashes into an overpass.”

Altogether since June of last year, there have been nine collisions in both directions on Guy St., and there has been a total of 27 trucks hitting various other railway bridges during that same period.

But to make sure truckers reduce the risk of collisions generally, Sabourin suggests they subscribe to the CargoMobile app.

“The idea of CargoMobile is you’re a truck driver, you enter on the app the size of your truck, the weight of your truck, and then your route, that you want to go from A to B,” Sabourin said.

The CargoMobile app will show the most efficient route and avoids obstacles like bridge restrictions.

For the time being, the app is web-based. A user logs on to the Cargo-Montreal.ca website, clicks on Actions, registers with an email address and a password is generated. After a trucker enters their details, they can print out the route or on a smartphone, use data to assess the route.

The app was developed by CargoM, an economic development agency that represents the Montreal transportation and shipping industry including the Quebec Trucking Association.

The agency is hoping to develop a mobile app to download directly to smartphones in 2019.