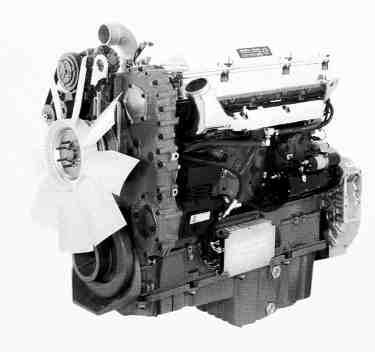 TOP SELLER: The Series 60 is one of DDC's top lines.

While DaimlerChrysler North America already owns 21.3 per cent of DDC, it is bidding for the remaining 78.7 per cent at $23 per share, for a sale price of about $423 million (all figures US).

Although the Detroit Diesel name will remain on engines, the companies have already announced hopes to find synergies in such things as manufacturing, and research and development.

As part of the acquisition – which still needs to be approved by U.S. and European regulators – DaimlerChrysler acquires Detroit Diesel’s headquarters and engine plant in Redford, Mich., and other operations around the globe.

Penske Corporation, which owns 48.6 per cent of DDC, has already committed to selling its share of the company, guaranteeing DaimlerChrysler a majority stake.

Penske originally bought into DDC in 1988 under a joint venture with General Motors, while Detroit Diesel became a public company in October 1993.

Today, DDC’s revenues are worth nearly $2.36 billion per year. It has also put 550,000 Series 60 engines on North American Highways.

“Detroit Diesel is one of the most challenging opportunities we have undertaken,” said DDC chairman Roger Penske. “Before we formed the company, there were large losses, morale was poor, and on-highway market penetration had declined to three per cent. Through hard work, the DDC team restored Detroit Diesel’s leadership position in the industry.

“We believe the merger with DaimlerChrysler will allow DDC to achieve its full potential,” Penske added. “The industry is going through a major consolidation, and this alignment with a world-class company like DaimlerChrysler assures continued growth for Detroit Diesel with bright prospects for its employees and customers.”

Detroit Diesel offers engines from 22 to 10,000 hp for the on-highway, off-road and automotive markets.

“While acknowledged as the number one commercial vehicle producer worldwide, we are also now the new lead manufacturer of heavy and medium duty on-highway diesel engines in the world,” said DaimlerChrysler chairman Juergen Schrempp.

The move gives DaimlerChrysler the ability to offer an integrated truck design in every world market, added Dieter Zetsche, board member of DaimlerChrysler responsible for commercial vehicles.

The Detroit Diesel product name is expected to remain.

The on- and off-highway engine businesses of PTU (Powertrain Unit of DaimlerChrysler), DDC and MTU-F will be integrated worldwide under the umbrella of the Commercial Vehicles Division of DaimlerChrysler. This new business unit will represent a total component business volume of approximately $7 billion per annum, and will result in DaimlerChrysler becoming the world’s leading manufacturer of diesel engines for medium and heavy-duty trucks.