OSHAWA, Ont. —  Early one morning in June, as the sun was coming up over Oshawa, Ont., a stretched-out 2015 Peterbilt 587 left the Mackie Transportation terminal on Boundary Road. It was pulling a 53-ft. enclosed auto trailer loaded for Seattle, Wash.

But the cargo inside the cab was pretty special, too. Four generations of Mackies making a cross-Canada road trip to commemorate 90 years in the trucking business.

“My grandpa Ross, my dad (Dean) and myself did a road trip down to Florida with a load of cars when I was about four,” explained Shawn Mackie, now 39, and director of freight services for Mackie Transportation in Oshawa, Ont. “I thought it would be nice if we had the four generations on a road trip while we are still able to do it.” 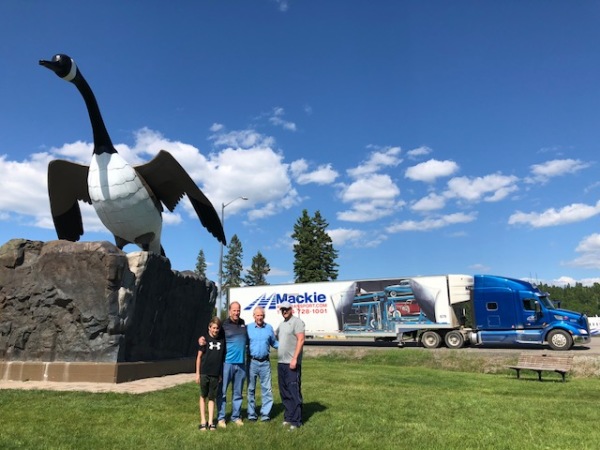 The journey was booked for early summer: a west coast run with an SUV going to a Ford dealership in Manitoba, a small freight delivery for Chilliwack, B.C., and a load of fancy motorbikes going to Seattle for the company’s annual Fly and Ride.

Traffic thinned as the Mackies rolled out of the reach of the Greater Toronto Area. Dean Mackie (59), president of Mackie Transportation, took the wheel while his son Shawn rested in the bunk. Completing the quartet were 12-year-old Jaxon Mackie (Shawn’s son) and great-grandpa Ross Mackie riding shotgun.

At 83, Ross has no shortage of offspring. His progeny now number four sons (Norm, Paul, Dean, and Scott, all involved in different divisions of the business), 14 grandchildren and seven great grandkids.

Shawn slipped into driver’s seat after they stopped for a sandwich in Parry Sound. Steady rain most of the day, but Ross was busy calling old friends en route. He reached Doug Smith, president of Manitoulin Transport, as they were passing Espanola.

“We chatted about the trucking business, how much it’s changed,” said Ross. “I told him we couldn’t stop, but he invited me up for a boat ride later in the summer.”

Charlie bought an old Godferson truck in 1928 and started hauling tomatoes around Oshawa. Ross’s mother Amanda Marie and sister Marilyn (who still comes into work every day at 82), answered the phone, handled the dispatch, typed the invoices, and kept the home front together.

As the decades rolled by, Mackie Transport was followed by Mackie the Mover. Later came the car carriers and automotive division, the logistics and the high-value freight segment, and of course the Harley Davidson shop on the other side of Hwy. 401.

The weather cleared later that afternoon when the ensemble pulled in next to the Tin Goose in Wawa, Ont., for the obligatory photographs. As it happens, Ross was in the first truck to drive this stretch of the Trans-Canada when it was officially opened on Sept. 17, 1960. His 1956 Autocar was directly behind the dignitaries cutting the ribbon.

“The next truck through was also from Oshawa, a McCallum Transport car hauler,” he recalled. “I got a kick out of that.”

You can’t drive across Ontario in one day; it’s too vast. And the driving culture is also different in the north – more camaraderie among drivers. Truckers wave to each other across the two lanes. The Mackies were always on the lookout for someone they might know.

“Just north of Wawa we ran into an eastbound Mackie Transportation car hauler, Sean Brake, and a Mackie HVP (high-value product) unit,” said Dean. “Both heading home with loads on.”

Young Jaxon was thrilled to miss a week of school, but the trip across Canada was also intended to be educational. They roused the young man from the bunk at the Terry Fox monument outside of Thunder Bay; he was genuinely excited.

“We stopped and took pictures around 11 p.m. Jaxon has been learning about Terry Fox at school recently,” Dean noted in his road diary.

Shawn drove through the night. When they stopped to fuel in Kenora, Ont., at 5 a.m, a couple of black bears were moving away from the fuel island leaving a trail of spilled garbage. Dean took over the wheel for the drive into Manitoba, fully confident they would make their delivery window Tuesday morning in Dauphin, Man. 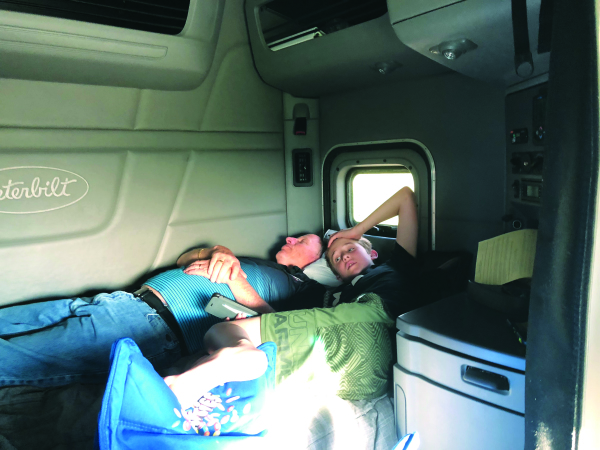 This journey replicates a trip that Ross Mackie made with his grandpa Charlie and father Merle to Vancouver in 1951. That summer morning, a small gas-powered Chevy tractor left Oshawa pulling the pride of the Mackie fleet – a brand new 28-ft. Trailmobile.

There was no Trans-Canada, and wet roads turned into “gumbo,” thick sloppy mud up to the axles.

“Those roads were like grease, and it was easy to slide off the road. When it happened to me, my dad would give me a cuff behind the ear,” said Ross. “The farmers were usually happy to pull us out. Wouldn’t want any money either.”

The highways are in much better shape these days, they agreed. The boys were happy to note that Calgary finally has a bypass.

The quartet took Kicking Horse Pass through the Rockies. Ross recalled the treacherous switchbacks and cut-out sections in the old days, and the time his dad lost the brakes descending Anarchist Peak with overheated drums. They rolled halfway through Osoyoos before he could stop.

The group hooked up with Mackie Moving Systems owner-operator, Ken Opferkuch, west of Golden, B.C. Their rigs ran the interior together to Kamloops. At Merritt, the Mackies jumped onto the Coquihalla Highway. This road is a modern engineering miracle and has been a godsend to truckers, cutting off hours of extra time negotiating the snaky Fraser River canyon.

“I drove the boys hard on this trip. But it was something unique we were doing. I wanted to show them some of the old spots I know about,” said Ross. He’s given up his A licence now and can’t drive big trucks. But unofficially, they found a dead-end road under construction. “They said I knocked over three pylons but I think it was only two.”

The delivery in Chilliwack was seamless, followed by dinner with more Mackie drivers at the nearby Husky. Dog tired, the boys checked into a Best Western for a well deserved night’s rest.

The last leg of the trip also went smoothly. There was a line-up at the border in Sumas, Wash., but they cleared rapidly at the Customs booth. A quick truck wash at a truck stop north of Seattle, and a few hours later they were delivering 14 decked-out Harleys to a hotel in Seattle.

These were the bikes for this year’s Fly and Ride, a couples’ tour through Washington and Oregon states. Spread only by word of mouth, these outings occur twice a year, usually a guys’ ride and a couples’ ride held separately. The bikes are delivered and picked up, and it could be from anywhere in North America.

“They started 15 years ago and it was just guys from the trucking business,” explained Dean. “But it’s really grown.”

Dean stayed behind at the hotel to accompany the bikers on their ride. Ross, Shawn and Jaxon flew back Saturday from Seattle. They had been gone six days.

I caught up to Ross the next morning at his barn in Oshawa, where he was trying to decide which vintage trucks to take to the Clifford Truck Show.

“I think I’ll take the 1964 Kenworth,” he said, his blue eyes sparkling. “I bought it myself from the factory in Vancouver where it came off the line. And I’m going to take the 1950 Kenworth and the Fruehauf furniture van.”

He’s already moved on to the next project.