SMITHERS, B.C. — Nestled in the tiny northwestern B.C. town of Smithers lies a rather unique delivery operation with a name representative of the area it has served for many years.

Bulkley Valley Wholesale is a small three – soon to be four – truck outfit that hauls product from the local Save-on-Foods to pretty much any business it can in the Bulkley Valley and beyond. 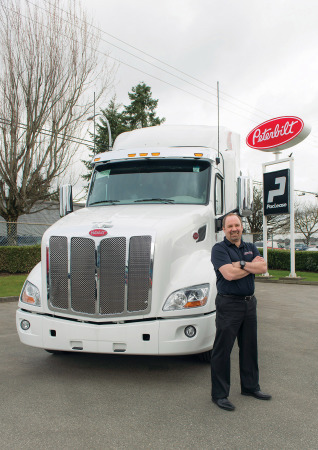 The carrier can best be described as an independent distributor, delivering product to grocery stores, schools, camps, restaurants, and other regional customers within a 900-km radius of Smithers. It services an area that stretches north into the Yukon, into Prince George to the east, and Prince Rupert to the west.

Mike Dandenault is the director of wholesale for Save-on-Foods, with Bulkley falling under his umbrella, and he said where the local Save-on-Foods is different from its competitors is that they function as a cash-and-carry wholesale operation and warehouse, offering customers a place to come in and shop, but also with the ability to build and assemble orders and ship them using their own fleet.

Bulkley Valley Wholesale began in 1959 thanks to Bill and Herb Leach, along with their partner Archie Dunlop, delivering confection and tobacco in the immediate area around Smithers.

After Tom and John Leach purchased the company from their parents in 1973 and opened Bulkley to the public in 2000, the carrier was purchased by the OverWaitea Food Group, which continued to operate the company in the same manner it had always been run.

Dandenault says his company is a unique operation in the Smithers area because they are able to control every aspect of food delivery without having to contract out the work to another carrier.

“We’re the only ones that once the groceries are delivered to us, we actually repack them and ship them out ourselves on our equipment,” he said.

Finding a carrier in the Smithers area to contract out this type of work would have been difficult, said Dandenault, from a reliability standpoint.

“Our business is selling groceries, and trucking is what we use to get it there. Being able to be consistent with new equipment and being on time, we are professional,” he said. “Priority number one is our product and our groceries, and when you control everything, you have control of your destiny.”

Making the job a bit easier has been Bulkley’s decision to enter an agreement with PacLease.

The carrier used to purchase trucks returned from lease, but Dandenault said maintenance and repairs were all too common problems.

With PacLease, the company now uses brand new Peterbilt trucks. They pay a monthly lease fee and a per kilometer rate, and under the PacLease warranty, downtime is no longer a concern, and planning on-time deliveries is more reliable for Dandenault and his customers.

And it’s not like the new equipment isn’t put through the ringer.

“We torture-test our equipment,” said Dandenault. “Our tractor-trailer can leave Smithers and it will be minus 15, it will head out and do its run to the coast and it will be plus two and raining, then it comes back into that minus 15. It’s actually very hard on the equipment…and we do that three times a week.”

Though Bulkley has been part of the Save-on-Foods family for about 15 years, Dandenault said the carrier has always been run separately as its own entity.

Dandenault’s focus was solely on Bulkley before entering his current position, managing the carrier for a few years – an experience that was both rewarding from an educational side, but challenging at the same time.

“When I first started, one of the drivers called me and I asked, ‘When are you back?’ and he said he was just pulled over to the side of the road doing a re-gen,” recalled Dandenault. “I said, ‘What the hell is a re-gen?’ I learned a lot about trucks, trucking, and equipment over the four years I was there.”

Dandenault and Bulkley are now operating on cruise control. With a fourth truck soon to be added to the fleet, Dandenault said the new pieces of equipment have not only made his day-to-day job more enjoyable, they have also helped with driver retention.

“If you have old equipment that is constantly breaking down, the drivers are going to get frustrated,” he said.

Bulkley uses three Peterbilt Model 579 trucks, two daycabs and one sleeper, with a Model 348 straight truck on its way.

For now, the company is happy with how its unique operation has progressed in the Bulkley Valley, which has come a long way since delivering out of a Volkswagen van in the late ‘50s.