WINNIPEG, Man.–  Advancements in autonomous truck technology continues to drive forward, and with that has come a call for autonomous friendly corridors (AFC) in North America.

One proposed project comes from the Central North American Trade Corridor Association (CNATCA), which has partnered with the Canadian Automated Vehicles Centre of Excellence (CAVCOE) to explore the reality of an AFC that would stretch from Mexico, through the central U.S. and into Manitoba. 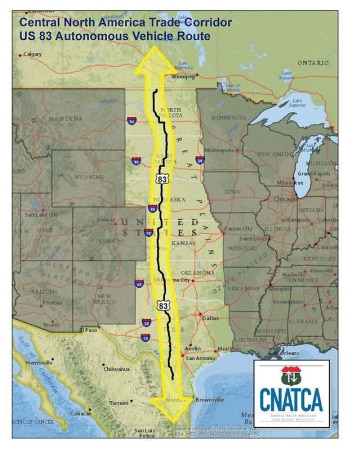 The vision of the AFC –Hwy 83 – is that carriers would be able to program an autonomous truck in Texas or Mexico to deliver goods to Minot, S.D., or even as far
as Manitoba.

Land ports would be set up along the corridor approximately 200 miles apart for refueling, cargo disbursement, and vehicle services.

Paul Godsmark, transportation specialist and chief technology officer for CAVCOE, said there are also discussions around an AFC along the Trans-Canada Highway, as well as between Calgary and Edmonton.

For Godsmark, an AFC is not necessary for autonomous vehicles to become a reality, but said it would certainly help facilitate a smoother deployment path for acceptance of the emerging technology.

“It is possible that those jurisdictions that promote concepts like an AFC will attract businesses and investment as they reap the benefits of lower overall transportation costs sooner,” said Godsmark, “which is then reflected in lower prices of goods at retail points.”

But how far into the future are we talking when it comes to autonomous vehicle use?

That, according to Godsmark, depends on one important factor – how fast automated driving systems (ADS) advance.

“Once an ADS has been developed that is safe for commercial deployment on a public road, then that ADS can be adapted and calibrated for other vehicle types,” said Godsmark. “So although tractor-trailer trucks are more complex to make self-driving than a car, once you have solved the critical issue of safe decision making whilst driving, then the unique characteristics of vehicle size, braking distances, swept path, and reversing with a trailer, are then a matter of calibrating for each vehicle.”

Godsmark said one company making progress on the advancement of ADS is Waymo, which has announced it has partnered with Google’s logistics team to test its technology in Atlanta, Ga. The company also did road tests over the past year with self-driving trucks in California and Arizona.

Another factor that Godsmark said could speed up deployment of autonomous trucks is to focus first on highway trips as opposed to urban delivery.

“It is therefore possible that we will see commercial autonomous tractor-trailer trucks on U.S. roads in 2019-2021 that are limited to specific highway routes,” Godsmark declared.

Roy Ludwig is the Canadian director for CNATCA, and the current mayor of Estevan, Sask., and would like to see Canada and the U.S. become more harmonized when it comes to autonomous vehicles.

“We have different rules and regulations in Canada compared to the U.S.,” said Ludwig, adding that there is testing of autonomous vehicles in the U.S. but is unaware of any similar efforts in Canada. “Hopefully we can more closely harmonize these moving forward.”

Ludwig also sees cost savings with autonomous trucks, and has seen some interest in the idea of an AFC.

“You could travel day and night because of the automation, and once perfected, it would be safer as well,” he said. “We did have discussions with a Senate committee, which seemed very interested and asked some good questions.”

Godsmark agrees with the cost savings of self-driving trucks.

“We estimate that autonomous trucks have the potential, by removing the driver, to reduce operational costs by up to 40% and increase time in use by around 40%, as there would be no need for working time regulations,” he said.

Public and government acceptance remains to be primary factors in the adoption of autonomous vehicles.

At some point, however, Godsmark said it will be provable that autonomous trucks are safer than those driven by human-beings, and the public will have to decide how much longer its trepidation of the technology will inhibit its use.

“It should be stressed that although it is realistic to expect autonomous trucks to eventually be safer than the average human driver, these autonomous trucks will still have crashes, because no technology and deployment will be perfect,” Godsmark pointed out. “The key question that society may need to address is, ‘How much safer does an autonomous truck need to be in order for it to be acceptable for use in the public realm?’”

The fact that many commercial driving positions would vanish is not lost on Godsmark.

“It seems reasonable to expect that there will be a transition from being a full-time driver to a part-time driver and chaperone,” he said.

Godsmark added, however, that once the technology is ready and in use, carriers will immediately look to reduce their costs by removing drivers, and truck manufacturers will design vehicles to capture even greater savings.

“Some complex and/or arduous trucking scenarios might always require a chaperone,” he said, “but for the majority of highway trips, it will probably be more cost effective to have unmanned vehicles and to provide human oversight in other ways.”