BANFF, Alta. – Improving safety in the industry is never a bad thing, but with that comes greater challenges for people looking to launch a career in trucking.

That was the sentiment during a presentation by the Alberta Motor Transport Association (AMTA) during the 18th annual Alberta Health and Safety Conference yesterday in Banff, Alta.

Erik Sherman, director of injury reduction and training for the AMTA, said though all safety professionals know safety processes and protocols have a huge outcome on a company’s success, they do create barriers to those entering the industry.

For example, mandatory entry-level training (MELT) has made it much more expensive and time-consuming for prospective drivers looking to get behind the wheel.

Prior to March 2019 when MELT was mandated in Alberta, someone hoping to acquire their Class 1 license would have to pay anywhere from $250 to $2,500, depending on what kind of training they completed in the process.

Sherman said MELT helps to increase the competency of the worker, as there is now a required educational component based on an occupational standard.

“A commercial driver takes every skill they acquired in a passenger vehicle and moves it into a much larger, much more complicated vehicle,” said Sherman.

He added that the AMTA has taken an aggressive approach when it comes to occupational competency of drivers, and have developed training around what carriers are looking for in an operator.

Andrew Barnes, director of compliance and regulatory affairs for the AMTA, pointed out that there is expected to be a driver shortage of 23,000 this year in Canada, increasing to 34,000 by 2024.

“We have to start addressing these questions and addressing change in our industry,” Barnes said of how they can entice more young workers into trucking.

Employers in Alberta’s transportation sector also have additional barriers when entering the industry.

Prior to March 2019, carriers looking to get their Safety Fitness Certificate (SFC) in Alberta were able to get a temporary one issued, which allowed the company to begin operations while developing a safety program over a 60-day period.

Now, however, carriers are not granted temporary SFC, and must take a six- to 10-hour pre-SFC exam followed by another written exam at an Alberta Registry agency, and pay a $150 online application fee.

The AMTA is by no means against these new safety measures – Barnes even pointed out how carriers used to be able to easily “reincarnate themselves” as chameleon carriers should they lose their SFC – but rather highlighted how the industry must address these new barriers to alleviate the ongoing labor shortage trucking has endured over several years.

Underscoring 2019 as the year of change, Barnes said last year was a significant one in the industry due to the well-publicized Humboldt tragedy, which was the catalyst for stricter training and safety regulations. In addition, last year saw insurance rates continue to increase, as well as injury related costs. Alberta’s change in government has also left some transportation issues up in the air during the transition period. 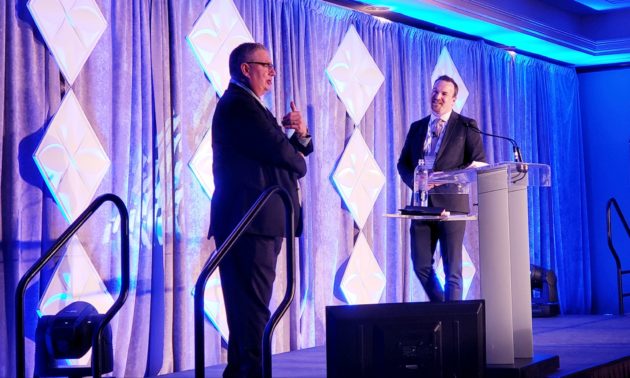 Expanding on health and safety issues in the industry, Sherman said several human factors in the workplace have an impact, including the working environment, culture, communication, leadership, resources, policies, skill level, and attitude.

Attitude, Sherman said, is improved with training and informing employees of the risk factors of their occupation.

“I tend to favor education as an attitude adjuster,” he said, adding that the greater attention employers pay to their drivers and their behaviors, the more immediate the feedback can be, which brings about positive change and a better attitude.

Technology improvements have also led to a safer industry, including the use of stability and traction control systems, connected trucks, and the adoption of ELDs.

“The industry is willing to accept these disruptive changes,” said Barnes. “We’re really posed for change, but with any type of change you have to be careful.”

Referring to tampering issues with ELDs, Barnes said Canada has learned a lesson from the U.S. when it comes to certifying the devices by adding third-party certification to the ELD regulation.

The industry’s continued move toward expanded driver assist features, and eventually autonomous trucks, is something Sherman said will improve safety for all motorists.

Breaking it down into five levels, engineering standards and improvements include better vehicle control, warnings, and collision avoidance and mitigation, all using advanced driver assistance systems (ADAS), which leads to Level 5, where the ADAS is responsible for all driving and environmental awareness and human are mere vehicle occupants.

To get to this point, Sherman said the path ahead is data-driven.

“We need, as an industry, to make sure we are accounting for discrepancies and move them out of the playing field,” said Sherman, pointing out that 90% of vehicle collisions could have been avoided if the human driver had done something differently.

In Alberta, there are approximately 23,000 commercial carriers, making up 13.1% of the industry nationwide, and ranking third behind Ontario and Quebec. Trucking makes up 8% of Canada’s overall GDP, and in Alberta, around 400,000 people are employed in commercial transportation.

4 Comments » for Breaking down barriers