NAPANEE, Ont. — It is often said in sports that while winning a championship is tough, defending one is even tougher.

But if the drivers from Home Hardware were feeling some added pressure coming off a dominant performance at last year’s Ontario Truck Driving Championships (OTDC), they weren’t showing it on the course at the Flying J in Napanee this weekend. The Home Hardware representatives once again made many trips to the front of the room during the awards banquet to collect their trophies and the private fleet will once again be well represented at this year’s nationals, to be hosted in Brantford, Ont. in September.

Grand champion was Home Hardware’s Shawn Matheson, who also won the tandem-tandem category. He narrowly edged out the tandem-tandem runner-up and Home Hardware colleague Tom Griffiths. The grand champion award is given to the driver who outperformed the average score of the class by the widest margin. Asked if he was surprised to win the award, Matheson said, “It sure did come as a surprise. It’s a great day. Awesome.”
He has competed in the provincials 10 times and has advanced to the nationals five.

A full field of 46 drivers competed in this year’s provincial competition. Each had to earn their way in by placing among the top drivers at regional competitions.

The highest points of the day award was also collected by Matheson, while Harpreet Singh of Speedy Transport was named the top rookie. 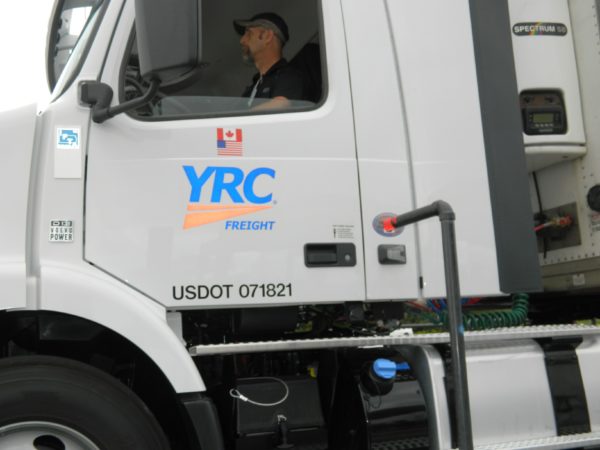 Kelly Ward won the powderpuff competition for the second consecutive year; it’s a side competition held for spouses using a pickup truck.

Many fleets were well represented at the event, with family members and colleagues there to offer their support. One such carrier was Kriska, which had two drivers in the provincials. Louis Carette finished third in the tandem-tandem category.

“We were so proud to see Louis finish in the top three,” said Tammy Cryderman, Kriska’s director of operations, noting he started with Kriska six years ago as a newly licensed driver and went through the company’s training program. “Ryan (Tremblay) also represented us well.”

Cryderman said the championships are a great event to support as a trucking company.

“Given this event is made up of a written test, skills competition and a circle check, it reflects that driving is not just about the skills behind the wheel but also about their knowledge and dedication to safety,” she said. “Our drivers do a great job representing us every day, maneuvering through spots that, to many of us, look impossible and without the few hundred onlookers to give them the accolades they deserve. As a carrier, it’s important that we encourage participation in these events, giving them the opportunity to showcase their knowledge and talents in front of their peers, friends and family.”

There were no women represented at this year’s provincials, but Jennifer Duval, also of Kriska, hopes to change that. She was named top rookie at the Toronto Regional Truck Driving Championships and was at the provincials to root on her colleagues. She said she will be competing again next year with an eye towards earning her way into the provincials.

There are always some interesting human interest stories that emerge during the competition. This year, a highlight was the participation in the B-train division of a father and son: Dylan (son) and Wayne (dad) Burnett. Dylan was competing for the first time and finished in third place in the category, narrowly edged out by his father, who came second. Both drive for Home Hardware.

We spoke to them about the experience afterwards.

“I was more nervous for him than I was for myself,” said Wayne. “I wanted him to do well. I’m very proud of him.”

“I have high expectations from him,” Dylan added.

Wayne has been competing in the provincials every year since 1989 and has won the B-train category six times. Dylan started driving four years ago and hopes to some day have his name etched on the same trophy.

“It was a little tense. A little nerve-wracking,” he said of the experience.

Sharing the Flying J blacktop with the drivers were some of Ontario’s top MTO inspectors, who were competing in the provincial inspector’s championships, vying for an opportunity to represent Ontario in the North America-wide competition to be held in Indianapolis, Ind. in August. Mike Wozniak took that honour.

Peter Hurst, MTO’s director of carrier safety, noted Ontario inspectors have won that competition four times – an accomplishment that’s unequaled by any other jurisdiction. Heidi Francis, assistant deputy minister of transport visited the event and did a lap around the course, chauffeured by OTDC committee president Rob Jackson.

“It’s a unique opportunity for officers and drivers to meet in an environment that’s collaborative and not confrontational, and to share their knowledge,” he said of the event.