EDMONTON, Alta. – Diversity and inclusion go hand-in-hand in the workplace, but don’t be fooled into believing they are one in the same.

Trades industries, including trucking, have been looking to diversify their workforces for a variety of reason, whether it is to increase the potential talent pool of new applicants, or bring varying perspectives to their businesses.

But what do companies need to do to truly change the face of the industry, and bring actual diversity and inclusion to their businesses?

A panel of four professional women from various backgrounds discussed this topic during the Women Building Futures Work Proud Summit in Edmonton today, and all agreed that it is one thing to be diverse, and another altogether to be inclusive.

“Inclusion creates diversity. It doesn’t alienate people…it makes them feel like they have a space,” said Lindsay Amundsen, director of workforce development for Build Together.

Tara Fong, manager of equity trades programs for the B.C. Industry Training Authority, agreed, saying inclusion is about treating everyone equally, while diversity is about embracing that effort.

“Women don’t need to change, culture needs to change,” said Fong, adding that many organizations are not “walking the talk” when it comes to inclusion and need to implement a strategy that outlines specific goals.

For Regina Davis, supply and technical services manager at the Strathcona refinery for Imperial Oil, diversity and inclusion has been significant in paving the path that led her to where she is today.

“The topic of diversity and inclusion is really near and dear to my heart,” said Davis, who, at a young age, attended a summer camp that introduced women to careers in traditionally male-dominated trades, something she said changed her entire perspective. “Someone thought it was important enough to provide a program on careers that females would not normally go to.” 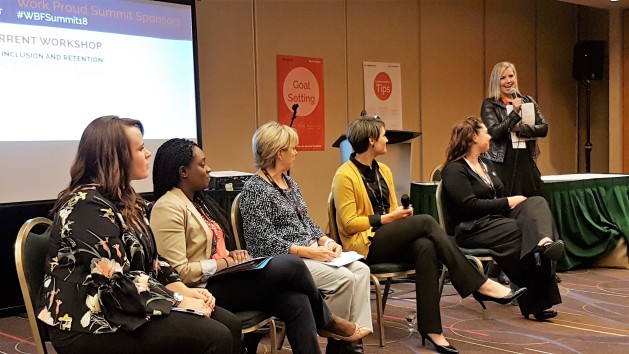 Early in her career, Davis worked alongside a mentor, something she said made a big difference in not only her growth, but also provided that sense of inclusion.

Today, Davis has paid it forward, mentoring new employees, something she said also helps with retention.

There were, however, times early in her career when Davis did not feel like she was part of the team, and it nearly pushed her out the door.

“Pretty early in my career I thought of where else I could go,” she admitted, “because I wasn’t feeling included.”

Davis said companies need to be wary of the fact that their efforts to become more diversified will disappear if there is not an inclusive workplace where all employees feel welcome.

Erin Thorp, senior construction manager for CANA Construction, has grappled with feelings of exclusion during her many years in the industry.

“I have found myself a number of times over the course of my career wanting to leave and being in some really inhospitable environments,” she said, harkening back to a time when male employees did not see her as an equal or as someone who was in charge of a particular project. “For me it’s a reminder for all of us to stay curious about who we meet…we will always make assumptions.”

Thorp agreed there is a significant difference between diversity and inclusion, both of which, if achieved, lead to employee retention.

“Inclusion is really that feeling that I belong, that I’m wanted where I am,” said Thorp, “and diversity is the outcome of that.”

Examples of how industry can increase diversity and inclusion included, team building and education, which is where Amundsen believes companies need to begin.

“It’s not on you to fix the problem,” she said of situations where inclusion is absent. “Four floors up we’re talking about these things, but it needs to trickle down. It should not be on you to fix that.”

Davis said Imperial Oil has around seven resource groups for women, as well as people of various cultural backgrounds and sexual orientation, which provide a sense of acceptance and appreciation to those it targets, as well as an educational platform for all employees.

For any diversity and inclusion effort to be successful, it comes down to employees from all departments stepping up to the table.

“At all levels there really has to be some courage of conviction,” said Davis. “You have to have people who are ready to have the difficult decisions.”

It’s not rocket science – building relationships within Indigenous communities is no different than any other culture. It just takes effort.

That was the message a panel sent during a discussion on how industry can reach out and entice more Aboriginal people to choose careers in trucking and other trades.

Sutter said companies must build a certain level of trust with any employee, and she could never understand why businesses thought it would be any different when it came to Aboriginals.

She said Indigenous communities will engage if companies conduct the process properly, and are not simply putting in the time to get approval for another bid or project.

Alita Murowchuk, Indigenous community engagement advisor for AECOM Canada, was also part of the panel. Murowchuk, who comes from a mixed family, with her mother being from the Cree Nation, said companies will see the resilience within Aboriginal communities if they take the time to understand where they come from, something she takes pride in doing.

“If I can understand what they are looking for, it helps me think outside the box,” said Murowchuk. “People want to share their history and where they come from. It’s a huge gap in where we’re going with meaningful engagement.”

Murowchuk said Aboriginal liaisons need to get out to Indigenous communities and bring with them knowledge and a background in the culture.

“I’m here because this is a personal and professional thing for me,” she said. “If we look at the landscape there is opportunity everywhere.”

Heinz said many companies get involved in Indigenous relations for the wrong reasons, whether it’s for profit, to meet a quota, or fulfill a contract.

Part of the challenge is getting people to do the right thing for the right reasons.

“If I was going to change anyone’s mind,” he said, “I had to change their heart first.”

Heinz, who lived with his family on an Indigenous reserve for about 16 years, said when it comes to the women in these communities, they are the glue that holds it all together.

“Everywhere I’ve been it was the women who held the community together,” said Heinz. “Empower each other to keep moving forward.”

Heinz added that it is important for all women to not only participate in industry as individuals, but also as a group. 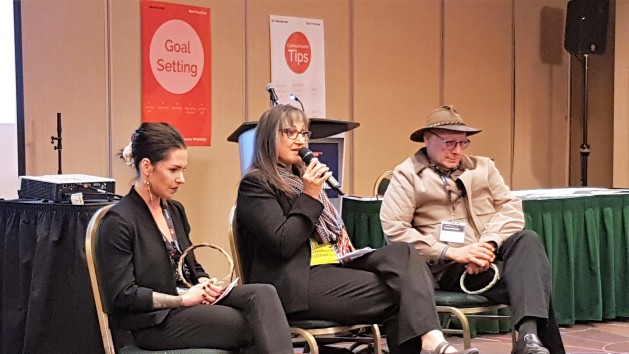 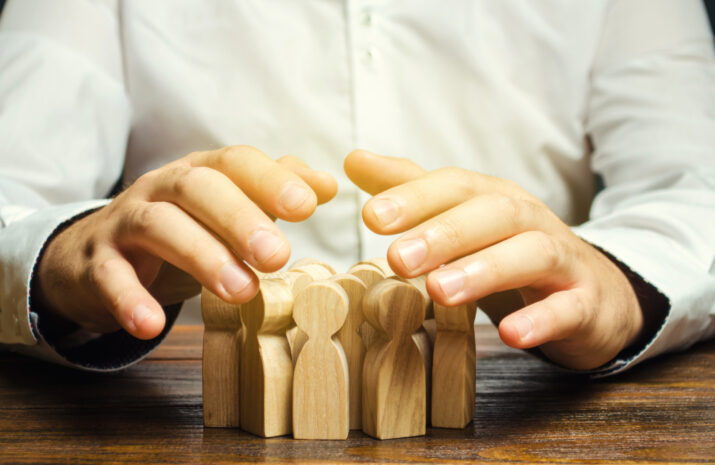