CALGARY, Alta. – The number of women entering the trucking industry remains low, and it’s not always easy for those who do.

That’s according to a panel of four women with various levels of experience in the industry. Each discussed what it was like when they first entered the traditionally male occupation, how their careers have progressed, and what they would like to see in the coming years.

Speaking during a panel discussion on the industry’s image, past, present, and future during the Western Women With Drive event in Calgary May 30, Lora Covinha, president and general manager of Phoenix Truck and Crane, admitted that it was difficult first entering the industry, as her initial impression was not an optimistic one.

“I came in with not a very positive perspective on how drivers were being treated,” said Covinha, whose husband is an owner-operator.

Covinha said she witnessed firsthand what she called a lack of respect for drivers at times within the industry.

When the opportunity to join Phoenix Truck and Crane arose, it was then that Covinha realized her company was trying to make a difference in the industry, and she wanted to be part of that effort.

Linda Young, vice-president of human resources and people development for Bison Transport, also had reservations about entering the world of trucking, having to be talked into it just to give it a chance.

With experience in pretty much every industry aside from transportation, Young said the level of professionalism she witnessed, as well as what she called frank dialogue, was a deciding factor in her remaining in trucking, and changed her overall perspective.

She said the interest, investment, and effort to improve the people within the industry was another factor that drew her in.

But Young still sees issues when it comes to attracting more women to trucking.

“I certainly see a huge challenge in getting more women into the transportation industry,” she said. “That three to four percent number, we can’t tolerate that any longer, and that means we have to act.”

Young harkened back to a time when there was a childcare issue associated with the hiring of women, and how men had an issue with what that entailed. With solutions now available for the childcare issue, Young said men now need to be enlisted into the same problem.

Van Essen said her company opened her eyes to more than the stereotype of the old, white male driving long haul. She said the operators she works with are a proud group, something that aided her decision to stay in the industry.

“Of course it is predominantly male at this point, but the operators that I deal with are very knowledgeable and experienced and take a lot of pride,” said Van Essen, “and as a young woman coming in, it wasn’t easy.”

Van Essen’s professional relationships have improved over time, but there were challenges when she first stepped into the field and had to work with some more experienced drivers.

“I learned very quickly (the importance of) having to have the appropriate approach…making sure that our operators understood that I’m not there to try to tell them how to do their job,” she said. “I can’t get behind a big truck and drive it. I have a lot of respect for those people who can, but I personally cannot.”

Stephanie Theede, vice-president of human resources at Westcan Group of Companies, never saw herself working in the transportation sector, but now, she can’t imagine herself anywhere else.

“We need to get uncomfortable to grow, but when we make ourselves uncomfortable, that’s when we are truly going to excel,” said Theede, adding that she viewed the industry as an opportunity no matter how intimidating it initially was.

Theede said she did not face any specific challenges when first entering the industry simply because she was a woman, but was rather due to her young age and inexperience.

Theede said one aspect of the industry that should help attract more women is its stability, and with more opportunities on the horizon, trucking should be strongly considered as a career option.

Young added that the industry needs to turn myths into opportunities, dispelling the misconceptions of the trucking sector and shedding a light on what a career in the industry is really all about.

With experience in both male and female dominated industries, Young said one simple approach has helped her career flourish.

“If I’m looking at it from a business perspective and not gender perspective, I end up in a better spot,” she said, adding that she can still get bothered when she knows someone treats her a certain way simply “because I’m five-foot-two-and-a-half.”

Covinha said she is constantly encouraging more women to get into the trucking industry.

“When Phoenix first started, there were no women drivers in the fleet, and now we have a crane operator who’s a woman and about seven women who are driving everything from a pickup truck to a five-ton flat,” she offered as an example of some of the progress being made.

Covinha highlighted how companies that support women with children often see more loyalty and trust as a result, aiding in employee retention in the long run.

Van Essen said there are numerous positions available for women in the industry. She added that women should remain confident in their abilities, not pretend to know something they do not, and not be afraid to ask for help when it’s needed.

Recruitment and retention topped Theede’s to-do list for the future, as well as a need to promote health and wellness in the workplace.

And for Young, the industry may never be the same.

“We are on the cusp of what I would consider a major disruption,” Young said, advising companies to stay on top of current trends to be ready for the change. “I don’t what that is, we don’t know how to anticipate it, but I surly tell you it’s going to affect your people.” 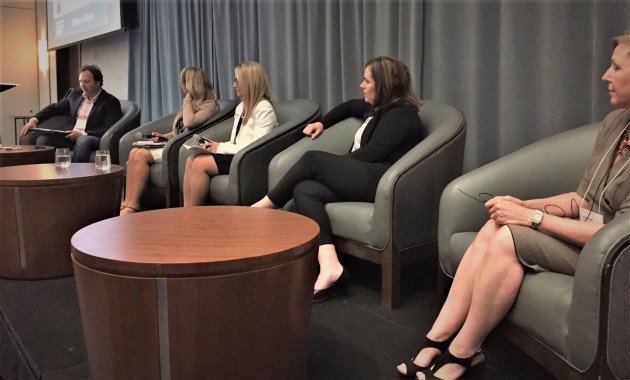 Getting out of your comfort zone

Telling a story of when she was told by colleague how she would never be more than what she was at the time, Ross-Graham said women need to be willing to try something others have not been willing to attempt before. Emphasizing the importance of listening, she said being attentive to others leads to success.

“Because I’m a good listener, I’m also a good question asker,” said Ross-Graham, adding that a good approach is to take non-practical things and make them practical.

Ross-Graham, owner of Sandbar Coaching and Consulting, addressing women in leadership roles, told the audience to ask themselves if they want to be leaders in their workplace and why it is important to them.

She said people often prop leaders up on a pedestal, make it intimidating to measure themselves against those they admire, and end up scaring themselves away from an opportunity.

“Nobody is 100% ready for that next job, so step into it if it’s something you really want,” said Ross-Graham.

Joining Ross-Graham on stage was Wendy King, chief information officer/chief operating officer for WCB Alberta, who said some new leaders are great at solving problems, just not the right problems.

King said asking “why” is an essential step to finding the root of a problem before being able to come to a proper solution, no matter how many times you have to ask the question to pinpoint the cause.

King believes providing support to coworkers is another step in the right direction, as it is much better to lean in and support than to lean back and judge.

“I can guarantee you that people will remember that support,” she said, adding that people tend to judge others for one simple reason. “Most people stand back because they are afraid.”

Addressing the #MeToo movement that highlights inappropriate behavior in the workplace some men have subjected on women, both Ross-Graham and King said they were concerned the movement could have unintended consequences on relationships between men and women professionally.

Ross-Graham said the movement has at times gone to the extreme, where men are afraid to mentor or be left alone with a female colleague for fear of being accused of inappropriate behavior.

King said it is “a shame” that some men now have fears as a result of the #MeToo movement, that the conversation around the issue needs to continue, and workplaces must be a place of mutual respect.

Angela Splinter, CEO of Trucking HR Canada, added that companies should have a system in place for how they would deal with a situation should it arise.

During another panel discussion on the importance of education in transportation, Michael Mooney, area vice-president of Alberta and N.W.T. for First Transit, said it’s important to identify an employee’s strengths and weaknesses in the effort to improve overall performance.

Whether an employee adheres to all the education they have received, Mooney said some may perform flawlessly when being observed, but fall short out in the field, which means it is not a training issue, but a behavioral one, and can be more difficult to remedy.

Mooney added that setting quotas for performance is not the way to go, as they do not result in employees rising up to the occasion, but rather lowers the bar for the company itself.

“You need to build things that work,” he said, “and they need to be evidence based.”

As for recruiting, Mooney said hiring procedures should be tailored to what a company is looking for, and with an understanding that different generations and individuals have various skill sets, who can all add to a company’s growth over time.

“Everybody is an investment,” he said.

Amy Richards, vice-president of people and organizational support for Trailer Wizards, echoed the opportunity for employees to work through their strengths and weaknesses, adding that when leaders provide feedback, they learn about the passions and skills of their staff.

She said training and development takes time and can be overwhelming, so a sound approach is to start with the small things and slowly work your way up.

“The reason I learned what I learned wasn’t from reading a book, I talked to people,” said Kathy Fenton, owner of Fenton Bus Lines. “People want to share with you…start asking the questions.”

In addition to a pair of panel discussions and motivational presentations, the WWWD 2018 event included a presentation from Women Building Futures (WBF), which helps women receive the educations needed in careers traditionally dominated by men.