Mercedes-Benz Sprinter van to be ‘Made in the USA’

An extension of its current facility, construction is to commence immediately, with the goal of having the first Sprinter van built in the US come off the assembly line by the end of the decade.

“Today we are here to break the ground for a new plant so that we finally have the opportunity to build the Sprinter from scratch here in the US in this new production facility,” said Michael Balke, incoming CEO/director of production for Mercedes-Benz Vans USA.

For years, the company has been building its Sprinter vans in Germany, where they then must be disassembled prior to being shipped to the US due to the current high import tariffs. Once they arrive at US ports, like Charleston, they are re-assembled and put on the market, which Mercedes-Benz said is a time-consuming process.

The new production plant in Charleston will enable the company to more economically meet growing demand for its Sprinter van and reduce delivery time to customers.

Balke, who currently works out of Germany, will be relocating to Charleston to lead the production team at the new plant.

“I’m confident that with our global teams, 10 years of experience and the guidance of our production team in Germany, this new Sprinter plant will be a strong success for everybody involved and for our global footprint,” Balke said.

Mercedes-Benz estimates approximately 1,300 new jobs will be created with the construction of the new plant, including around 400 new positions with suppliers in and around the Charleston area.

“Today’s groundbreaking, and the 1,300 jobs it means, will build on the successful partnership that our friends at Daimler and Mercedes-Benz Vans have enjoyed with our state for years,” Haley said during the ceremony. “We are proud to say that Mercedes-Benz vans will now be made in South Carolina.”

Also in attendance was South Carolina senator and former US presidential candidate Lindsey Graham, who said it never made any sense to have Mercedes-Benz vans shipped to the county and have to be re-assembled upon arrival, adding that the new plant in Charleston would eliminate the need for such an arduous effort.

Frank Klein, head of operations for Mercedes-Benz Vans, said the new Charleston plant was a ‘leap into the future,’ and will be one of the most advanced facilities in North America.

“The plant will meet the highest standards in quality,” he said, “based on our globally standardized production system, from the first vehicle the rolls off the assembly line.”

Once the extension is completed, the Charleston facility will cover approximately 1.1 million square feet, in addition to a 2.8 million square foot marshaling yard for finished vehicles.

Mercedes-Benz invested around US$500 million into the new production facility, which the company says once completed will be one of the largest industrial employers in the region.

The US is the fasted growing and second biggest market for Sprinter vans in the world, behind only Germany, with about 28,600 units delivered to American customers last year, compared to 25,800 in 2014.

“We introduced this strategy six years ago with the goal of writing a truly global business,” said Volker Mornhinweg, head of Mercedes-Benz Vans, adding that in 2015, the company sold 321,000 vans, which was 9% more than the previous year. 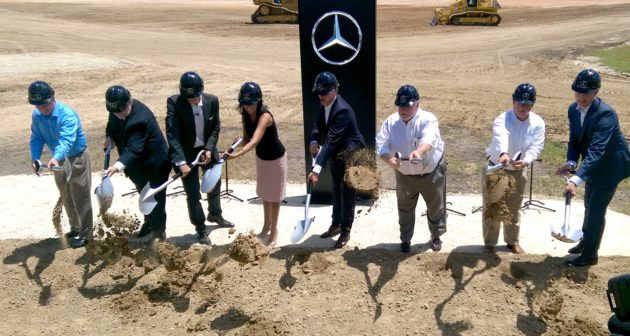