Rand McNally has unveiled a fifth generation of its Global Positioning System in the form of the TND 740, enabling over-the-air updates among other features. 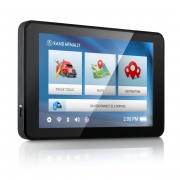 The device comes with a magnetic mount, the ability to update maps and content over Wi-Fi, and a quad-core processor. New maps for the U.S. and Canada, as well as new icons, are also described as easier to recognize at a glance. Addresses can be searched through a free-form or structured format, while the pre-loaded DriverConnect Electronic Logging Device service can now be accessed through a single icon. The app pairs with the previously announced ELD 50 and DC200 plug-in devices for Electronic Logging.

Trip details are enhanced with information like fuel prices, weather, and traffic conditions, while a central dashboard has been redesigned to offer drivers key parameters at a glance. It’s all delivered through a seven-inch display with a higher resolution and brighter look than the TND 730, the company says.