November 6, 2012
MISSISSAUGA, Ont. -- Walmart Canada recently unveiled its latest transportation innovation, a 60-foot supercube trailer that allows the retailer to ship up to 30% more product than a standard 53-foot trailer. 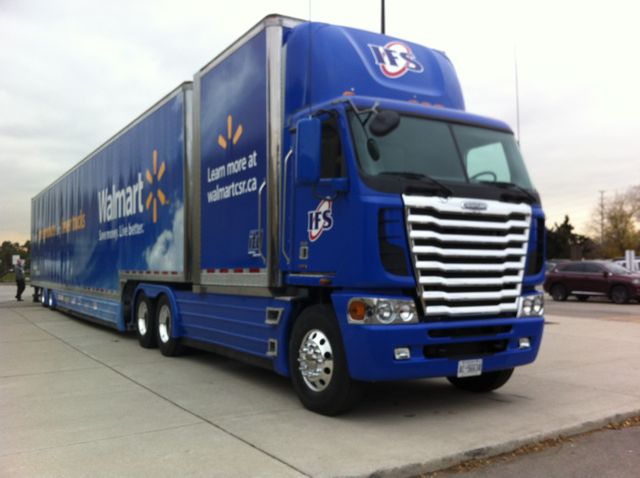 MISSISSAUGA, Ont. — Walmart Canada recently unveiled its latest transportation innovation, a 60-foot supercube trailer that allows the retailer to ship up to 30% more product than a standard 53-foot trailer.

Designed and built in Ontario, the supercube trailer was produced in partnership with Innovative Trailer Design.

The supercube trailer was unveiled at the recent Fall 2012 Transportation Sustainability Conference. Held at the Walmart Canada home office, the conference was attended by representatives from various industries including retail, transportation and logistics and energy, and included presentations on fuel innovation, natural gas and transportation innovation.

The trailer was 100% built in Mississauga by ITD, and literally just came off the production line to start carrying freight as of Nov. 12, Andy Ellis, Walmart supply chain and logistics senior vice-president told Trucknews.com.

The tractor is a Freightliner, built in the US but modified in Canada.

“The conference provided us with a chance to showcase the supercube trailer not only with supply chain and transportation professionals, but also with other retailers,” added Ellis.

“We’ve always said that sustainability is not a competitive advantage. We’ll share the knowledge and technology put into this truck with anyone who’s interested, just as we’ve shared the knowledge gained from our sustainable fresh food distribution centre in Balzac, Alberta,” said Ellis in a release.

“We don’t anticipate there being any significant difference in fuel consumption, said Ellis of the vehicle. We will test the fuel efficiency one it goes into production – it’s got a standard diesel engine, and 30% more freight capacity,” said Ellis.

Walmart’s supercube trailer was built under a special permit through a pilot program at the Ministry of Transportation in Ontario.

“It’s no bigger and no longer than a traditional truck – it’s just been optimized as far as its cube. That was really important in the design,” said Ellis.

The extended semi-trailer of up to 60-ft, 6 inches provides about 28% more volume than the existing 53-ft semi-trailer with a floor that is lower, not actually higher, than a typical trailer currently in use.

The Ministry is granting permits for four trailers, and two tractor units.

“This is a pilot. We’ve got a permit to put four of these trailers on the road in Ontario. We hope we get permission to extend it. At that point we’ll obviously work with our carrier partners. But this is not just about Walmart. We’re very happy to share the specifications created through ITD with everybody,” Ellis said.

When Walmart approached the MTO, the consideration was that the roads are congested and that this could help take trucks off the road, he added.

Carriers of low density cargo could benefit through improved productivity.

MTO is going to grant four permits, subject to conditions, to carriers operating for Walmart during the first phase of the pilot testing of the combination, expected to last for at least one year.

After one year, MTO will evaluate the performance of the extended semi-trailers to determine if it will grant additional Special Vehicle Configuration Permits to other carriers.

After a further period of regulation MTO will observe performance and if road safety is improved or maintained, compared to current conditions and relating to typical tractor semi trailers, it will look at bringing the extended semi-trailer into regulation.

Basic trailer specifications are as follows:

In the trailer interior, a fully welded and sealed lightweight all-aluminum flat floor with anti-slip surface minimizes trailer weight while providing a safe and low- maintenance surface, said the company.

In addition to the specification listed above, the supercube also includes a host of safety features such a driver safety system which includes lane departure warnings, video-based safety and telemetry, and automatically generated risk management reports to facilitate safer driving. It also features a back-up camera to facilitate safe and easy operation, fuel-saving resistance tires and side skirts, and a roll stability system to prevent rollovers, the company said.