HOUSTON, Texas – Electronic logging devices (ELDs) are making a significant impact on HOS compliance in the U.S., something that is likely to be mirrored in Canada come June of 2021.

An always-popular session during Trimble’s in.sight User Conference, Federal Motor Carrier Safety Administration (FMCSA) director of enforcement and compliance Joe DeLorenzo highlighted the impact ELDs are having on the trucking industry in the U.S.

DeLorenzo said he estimates 99% of those being inspected are compliant with HOS regulations, something he said the ELD mandate was intended to achieve.

He added, however, that the number of citations being issued for false log violations of duty status have not seen the same decreases, with many still looking to get one past the system.

“There are a lot of drivers who are taking some liberties there,” said DeLorenzo, hoping there will soon be a reduction in this type of activity.

DeLorenzo urged conference attendees who have not yet made the transition to ELDs to wait no longer, emphasizing the need to have drivers properly trained on the device to expedite quick and efficient inspections.

DeLorenzo said violations mostly come down to how well the driver knows how to operate the device they are using, specifically when it comes to transferring HOS data to an inspection officer.

In the U.S., FMCSA says there are approximately 35,000 successful data transfers per month, a 90% success rate.

Citations for a device that is “unable to transfer” HOS data are one of the most common being issued by FMCSA.

DeLorenzo said the quickest and most efficient way to transfer data is electronically via web services, and that carriers should focus on this method when transitioning from AOBRDs to ELDs.

Some “unable to transfer” violations have been issued when the driver attempts to email the information to the officer, which can take some time, leading to the officer essentially giving up, DeLorenzo said, and issuing a citation.

Drivers can still use the ELD display screen as a backup to show HOS compliance. There are also times when drivers are being inspected in an area with no cellular service. Under these circumstances, DeLorenzo said the officer should use their judgement before issuing any citations, and carriers can fight the citation if they can prove a transfer via email was ultimately successful.

Other common citations being issued by FMCSA include violations for failing to maintain paperwork, such as the ELD instruction manual, data transfer instructions, and blank paper logs.

Less than 1% of violations are issued for failing to use an AOBRD or ELD.

Carries also have responsibilities when it comes to compliance. A carrier failing to ensure its driver’s ELD record is accurate can lead to a citation. As can not electronically producing ELD records upon request and neglecting to review records of unidentified driving or neglecting to annotate the record to explain why the time was unassigned.

“The better your driver is at talking the officer through the process, the better off they are,” said DeLorenzo. “The less questions an enforcement officer has to ask, the easier the inspection is going to go.”

U.S. carriers need to make the switch to ELDs from AOBRDs by Dec. 16, as will Canadian carriers hauling cross-border.

One of the biggest differences between AOBRDs and ELDs is unidentified driving, which must be recorded and accounted for with the use of an ELD.

With every mile a truck moves having to be accounted for, DeLorenzo stressed the importance of training drivers how to properly use ELDs, including adding edits and annotations to explain actions like unidentified driving.

Drivers are able to edit their ELD record, but cannot shorten drive time. Any unassigned miles need to be addressed prior to operating the commercial vehicle, and any edits require annotations to explain the change. 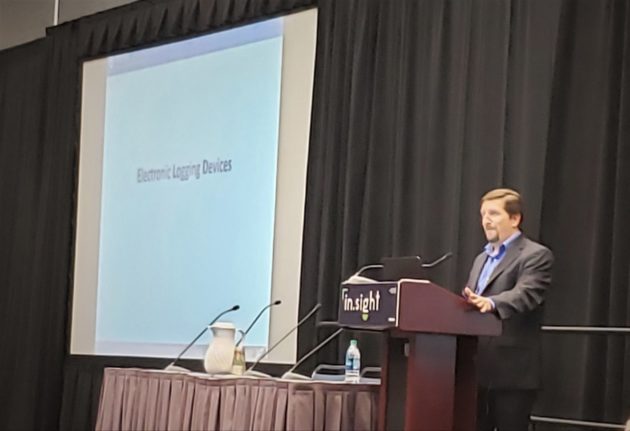