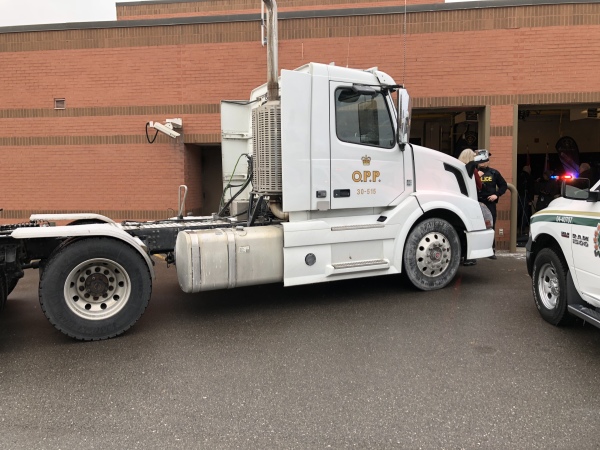 TORONTO, Ont. – The Ontario Provincial Police (OPP) are once again heading out in their Class 8 truck to try to catch distracted drivers across the province.

OPP Superintendent Tony Cristilli said the police service would use every tool available to it to run a week-long blitz to help bring awareness to distracted driving.

Highway Safety Division (HSD) Staff Sgt. Kerry Schmidt posted a video to his Twitter showing the white OPP tractor ready to go out on the road moments before a Monday press conference in the Greater Toronto Area (GTA) announcing the campaign.

The OPP has two of the Class 8 tractors. Earlier this year they were unveiled as an additional tool for patrolling highways in the GTA. When they aren’t being used for enforcement, the trucks are normally used to haul police cars between divisions.

Schmidt has said in the past that using the Class 8 trucks as patrol vehicles gives officers the advantage of height, allowing them to see into the cabs of other trucks, as well as giving them a bird’s eye view on unsuspecting drivers in passenger vehicles.

While other recent blitzes have focused on commercial motor vehicles, the current enforcement initiative is not targeting any specific kind of driver, but all road users, Cristilli said.

Police will not just be looking for cell phone users behind the wheel, but for any activity, such as eating or reading, that takes a driver’s focus off the road.

The penalty for being caught driving while distracted is a $490 fine, and three demerit points for a first offence.

“In 2017, the Ontario provincial police investigated 83 motor vehicle deaths in which inattentiveness was an underlying factor,” said Cristilli. “Since 2009 – the year when Ontario’s distracted driving laws took effect – 692 people have died at the hands of inattentive drivers. Distracted driving is a danger to all road users.”

Increasing regular blitzes focusing on distracted driving are one of the methods the OPP is using in its attempt to raise awareness about the issue and bring the number of collisions caused by inattentiveness too zero.