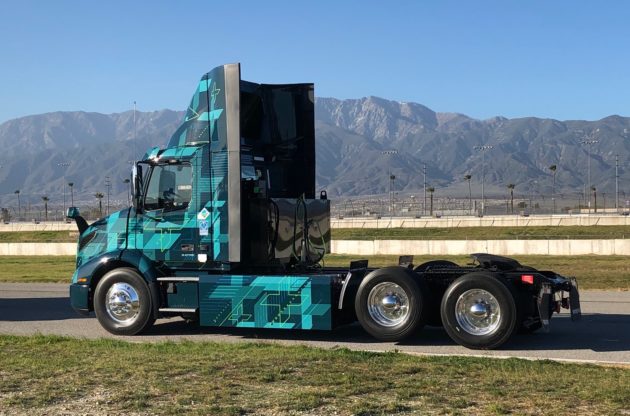 The company credited a deep roster of 14 partners, including the California Air Resources Board (CARB) for making the project a success.

Volvo LIGHTS was launched in 2018 and the first electric trucks were produced on schedule. They’ll be delivered to several fleets operating in California and serviced by TEC Equipment, which has installed two charging stations. About 250 people were invited to the launch, and Canadian fleets including Purolator, Bison Transport, Loblaw, Challenger, Canadian Tire and Verspeeten Cartage were represented.

LIGHTS represents a US$37-million investment from Volvo, which will put another $2 billion into North American research and development per year going forward. Lundstedt said that represents the company’s largest ever investment in North America.

“We believe in this continent, we believe a lot of things will happen,” he said. “We are also proud we are building 100% of our trucks here in the U.S.”

Volvo initially considered importing its European FE and FL electric cabover trucks to North America, but instead opted to electrify its recently released VNR regional haul truck. By the end of this year, limited production will begin for a straight truck as well as tractors in 4×2, 6×2 with liftable axle, and 6×4 configurations rated at a 66,000-lb gross combination weight (GCW). The electric driveline has been imported from Europe, as part of Volvo’s CAST (Common Architecture and Shared Technologies) strategy.

The heart of the driveline is a two-speed transmission, with dual electric motors to provide propulsion energy. Batteries are packaged on both sides of the chassis for easy access. The truck still has a radiator to provide battery heating and cooling. The engine compartment has been filled with the modular power box. A charging port on the driver’s side is easily accessible.

Brett Pope, director of electro-mobility for Volvo Trucks North America, touted the virtues of the VNR Electric. It has no tailpipe, and produces no emissions. During its operating life, it will produce 40-60% less CO2 than a diesel-fueled truck. It’s also much quieter, which Pope said “will help in urban areas with growing population densities.”

The cab interior is six decibels quieter than a diesel truck. The electric truck will first target local distribution, regional haul and construction segments, but Pope said longhaul is on the longer-term horizon. The first electric trucks are anticipated to put in 75 to 100 miles a day.

“As the technology improves and the charging infrastructure develops in public spaces, we’ll move into the next segment and grow all the way into longhaul as our ultimate objective,” said Pope.

TEC Equipment, one of the LIGHTS project’s partners, will service the trucks, and is also a customer. It will use the trucks for parts delivery in the Southern California market. It has installed two charging stations at its flagship Fontana store. 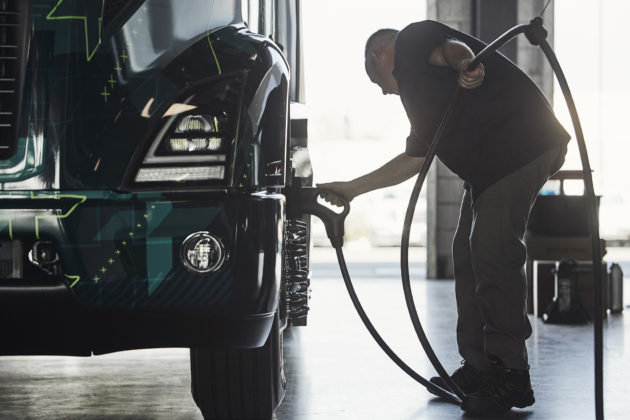 “It is clear for us at Volvo Group, there will be more transport demand going forward,” he said, citing an increasing global population, greater urbanization, economic growth and e-commerce. “At the same time, transportation cannot grow. Transportation as we know it today cannot just continue to grow, meaning we need to come up with solutions.”

He added, “Electro-mobility will be one of the most important solutions and we are well underway.”

He’s encouraged by the pace at which battery technology is advancing, and noted the trucks rolled out as part of the LIGHTS project already feature second generation battery technology. Volvo itself has three teams of engineers working on battery technologies. It is hoped that future generations will reduce weight and add range. A key step toward making battery-electric trucks viable is developing a charging infrastructure.

In addition to TEC, Trillium has installed two 150-kW fast chargers at its Anaheim, Calif., truck stop. The Port of Long Beach is also installing a 150-kW charger to support drayage operations. Fleets will also consider installing their own charging stations, but Keith Brandis, vice-president, partnerships and system solutions, warned it’s not a simple undertaking.

“Expect challenges and delays,” he cautioned. He suggested to budget plenty of time for installation, to work with experienced turnkey installers, engage jurisdictional authorities early and plan ahead for future capacity needs.

Dependable Supply Chain Services will take delivery of one of the first electric VNRs. Troy Musgrave said he’s confident in the electric motor. “What we are testing is a fuel source,” he added. “What we’re really trying to do is identify if this fuel is going to support that tool we use every day and help us achieve the things we do for our customers.”

The company is also looking to electrify other freight handling equipment, such as forklifts and yard tractors and is installing solar panels on facility roofs to help supply the required power. Musgrave sees it attracting a new generation of career-minded talent

“I personally believe electro-mobility is the way forward,” he said, adding there is both a societal push and an environmental push to adopt electric vehicles. But he also acknowledged there needs to be support from government.

“Battery electric trucks today are rather expensive, and sustainability and economics need to go hand in hand,” he said. “LIGHTS is a fantastic way to show the world how it’s going to work. We need to warm up the engine, and we need to make sure we get the scale. We need to get the trucks on the road, and the economics will follow.” 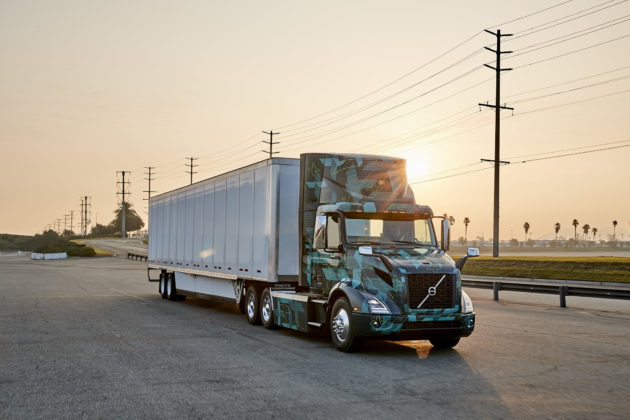