LAS VEGAS, Nev. – Daimler Trucks has determined that truck platooning is not currently viable, and will instead focus its efforts on developing autonomous vehicles.

Those were among the key announcements from Daimler, made during the Consumer Electronics Show (CES) here today.

“Automated trucks can take trucking and transportation to the next level,” said Martin Daum, CEO of Daimler Trucks and Buses globally. CES is a global showcase of innovation, held annually in Las Vegas, where Daimler showcased the first autonomous truck in 2015. Since that time, Daimler has worked to learn more about autonomous trucking technologies, and has become the first truck manufacturer to commercialize Level 2 – or partial – autonomy.

But while the company sees great promise in autonomous trucks, it has decided to end its R&D spending on truck platooning – where trucks follow closely together to improve aerodynamics, with the lead truck controlling the acceleration and braking of the following units.

“We are not prioritizing anymore platooning,” Daum said. He added thousands of miles of real-world testing failed to deliver the fuel savings that were expected and needed to make the return on investment sensible for fleets. Too often, he said, traffic would interrupt the platoon, and more fuel was burned while trying to re-engage the platoon once broken.

“We won’t start another project on platooning for fuel efficiency,” Daum said, noting the money spent testing the theory hasn’t gone to waste. He said platooning may make sense in the future, when a driver is no longer required in the following vehicles, and added Daimler has learned a lot about the technology.

In addition to bringing a Level 2 autonomous new Cascadia to market this year, the company also plans to begin testing fully autonomous (Level 4) trucks in the U.S. sometime in 2019. It plans to skip Level 3 altogether.

“We have aspirations to bring that technology to the road within a decade,” Daum said of fully autonomous trucks. “It’s in sight.”

He touted safety improvements as a major benefit, noting 94% of truck crashes involve driver error. Productivity benefits will also be realized, as the trucks can run around the clock and at night when traffic is less dense. It can also take advantage of intelligent routing management to avoid traffic jams.

“Highly automated trucks will cut cost per mile considerably,” he said. “Level 4 trucks will be a must at some time in the future.”

Challenges that lay ahead include ensuring the technology can work in rain, snow, desert heat, on construction sites, and that all sensors and systems can run more than five years or 500,000 miles – and eventually double that. At the same time, Daum said Daimler will be working with lawmakers to develop a regulatory framework. Daimler will spend $600 million on developing automated trucking technologies over the next few years.

Roger Nielsen, CEO of Daimler Trucks North America, said the U.S. is a “natural habitat for us to develop automated trucking.” It offers 48,000 miles of interstate freeway on which to test.

The new Cascadia featuring Level 2 autonomy is in pre-series production and will enter series production in July. It incorporates the Detroit Assurance 5.0 suite of active safety systems, including optional lane-keeping assistance, to achieve Level 2 status. While the truck is capable of staying in its lane, the driver must keep his or her hands on the steering wheel. Technologies are put in place to detect when the driver has removed their hands for any extended period of time.

“Today, we give longitudinal control,” Nielsen explained. “Level 2 now gives us lateral control. It keeps the trucks in the center of the lane and if it begins to depart the lane, it brings the truck back to the center of the lane. You as the driver still have full control and are completely paying attention to the road and the environment around you.”

Level 2 autonomy will be an option on the new Cascadia, but Detroit Assurance 5.0 without lane-keeping will become standard this year.

Wilfried Achenbach, senior vice-president of engineering with DTNA, said “It’s a vehicle where the driver remains in control at all times…the system is always on, always alert, and never needs a coffee break.” 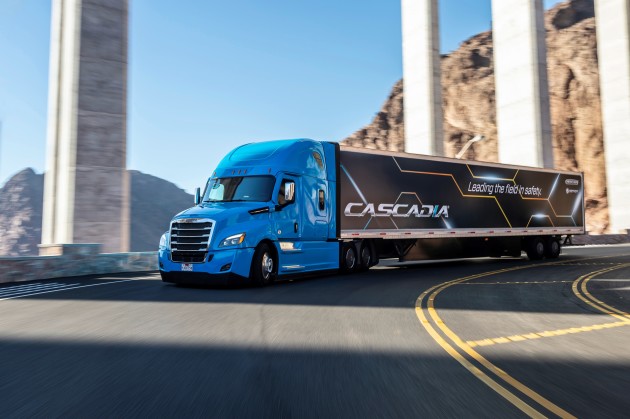