NEW ORLEANS, La. – With Hurricane Florence out of the way, I flew to Asheville, N.C. Sept. 17 with questions on my mind. A handful of editors were about to embark on a nearly 1,000-mile test drive in the new Mack Anthem, with a focus on fuel economy.

I wondered, can I hit 10 mpg? Does turbocompounding work as advertised to deliver fuel savings? And how would my fuel economy stack up against more experienced drivers, and my editor peers? It was an insightful three-day trek that featured stops in Nashville and Memphis, Tenn., Jackson, Miss., and which wrapped up in New Orleans, La.

The trucks, the route, the food

Who ever said a test drive can’t include a little fun? Our route with six Mack Anthems covered 940 miles over three days, and we took in some sights along the way. We also enjoyed some good grub – in fact, the tour was dubbed by Mack as the ‘Gears, Guitars and Grub’ tour. It’s true the barbecue in Memphis is tough to beat.

The fleet consisted of six Mack Anthems with some key differences. Two red tractors had the MP8-445C Maxi-Cruise engine (445 hp/1,860 lb.-ft. torque) with full aero package, but without turbocompounding – or what Mack is now calling Energy Recovery Technology (ERT). More on that in a bit.

The HE+ package features: predictive cruise, and a full aerodynamics package including a roof fairing with adjustable trim tab, an under-bumper spoiler, and chassis fairings with ground effects.

So, from those spec’s alone, you’d expect the white tractors to deliver the best fuel economy performance with the blue trucks hot on their heels and the red tractors slightly behind.

Initially introduced on the MP8 engine as turbocompounding, Mack has elected to adopt the more marketing-friendly term Energy Recovery Technology (ERT) to describe this feature. It did so to avoid confusion with past examples of turbocompounding, which differed completely by taking previously wasted exhaust heat and turning it into additional horsepower to provide a performance benefit.

Mack flipped this model upside down and instead uses the 50 or so additional horsepower generated from previously wasted heat, and uses it to take a load off the engine, improving fuel economy. It’s an efficiency-based concept, rather than performance-based. 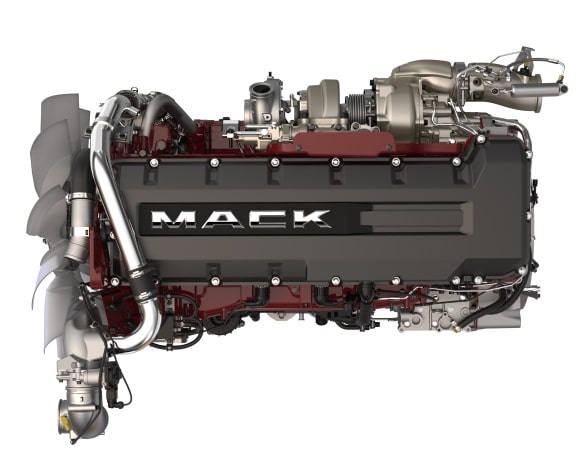 “Mack Energy Recovery Technology is an advanced feature of Mack’s MP8-HE engine that captures engine heat that would otherwise be lost, converting it to mechanical energy and delivering it back to the crankshaft in the form of torque. The additional energy allows the engine to operate at 1,000-1,100 rpm, improving fuel efficiency and life expectancy without sacrificing performance,” Phil Cary, southeast regional fleet service manager with Mack Trucks, explained to me during our drive.

“Mack ERT is not applying turbocompounding in the traditional manner, which has been used to add more power to the engine’s output, rather than to relax the engine to improve fuel efficiency and life expectancy without sacrificing performance.”

Mack touts about a 5% fuel economy improvement in trucks spec’d with ERT. But would the trucks with ERT live up to this claim on our nearly 1,000-mile route?

It’s often said that the driver can have up to a 30% impact on fuel economy, all other things being equal. I don’t believe that to be the case anymore, when driving newer-generation trucks with all the latest technologies such as automated manual transmissions and adaptive cruise control. These technologies are the great equalizers, which allow even a novice driver to rival the fuel economy of a veteran.

I was curious to prove my theory during this drive. 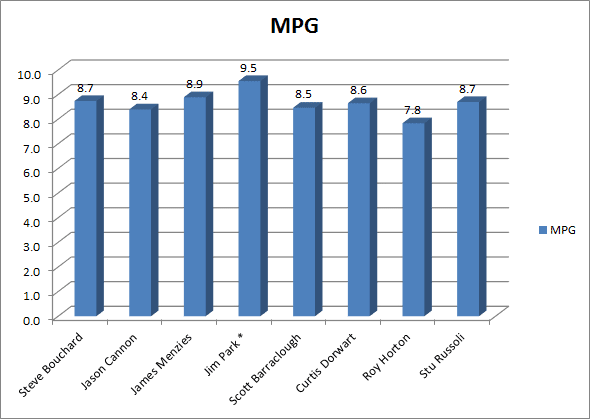 Jim Park, an editor with Heavy-Duty Trucking and Today’s Trucking, has two million miles over the road to his name. He knows how to coax great fuel economy out of whatever powertrain you want to put in front of him. I’m not too proud to admit that the rest of us editors lack that over-the-road pedigree. You’d expect Park to blow our fuel economy out of the water. But that didn’t happen.

Taking the non-ERT Macks out of the picture, there was an 11% spread in fuel economy between Park – who achieved the best mileage at 9.5 mpg – and the rest of us. But Park had a slight advantage. The non-ERT truck he was driving on the final leg had to be taken out of service due to a mechanical gremlin, so his mpg reflected only his time in the two ERT-equipped models. So, for fun, let’s take the 9.5 mpg driver out of the picture, as well as the driver of the other non-ERT Mack. Now we get a 5.6% gap between the best and worst drivers in the convoy.

As I suspected, the technology available from this powertrain brought parity to our small pool of drivers, while the veteran was still able to squeeze a little better fuel mileage out of the equipment than the rest of us. For a direct comparison, Park got 10.5 mpg out of the same white #4 Anthem in which I achieved 10 mpg on the dot. A 0.5 mpg improvement cannot be overlooked.

Put the technology to work for you

My goal all along was to hit 10 mpg, something I haven’t been able to achieve before. I achieved that on the final leg with truck #4, a white Anthem that consistently obtained the best fuel economy. Here are some tips that I followed to get there: I used cruise control religiously – as much as 85% of the time.

I upped the engine brake setting while in cruise by a few miles per hour in order take full advantage of the truck’s momentum on downhill grades and rolling terrain. I kept my speed at the speed limit, or against the top cruise setting of 68 mph in 70 mph zones. And I tried to minimize the number of times the active cruise with braking feature of Bendix Wingman Fusion brought a stop to my momentum, by dialing back the cruise speed when approaching traffic.

Getting comfortable with the technology

The Mack Anthems we drove were loaded with technology, including the Bendix Wingman Fusion collision mitigation system with active cruise control. It can take some time to get used to active safety systems, such as those that monitor pre-set following distances and apply the brakes when necessary to maintain them. But I clearly became more comfortable with the technology in short order, as evidenced by my increased use of cruise control on each leg of the drive – from 74% on the first leg to 78% on the next, and finally into the mid-80%s by the end of the drive, when I achieved my best fuel economy. 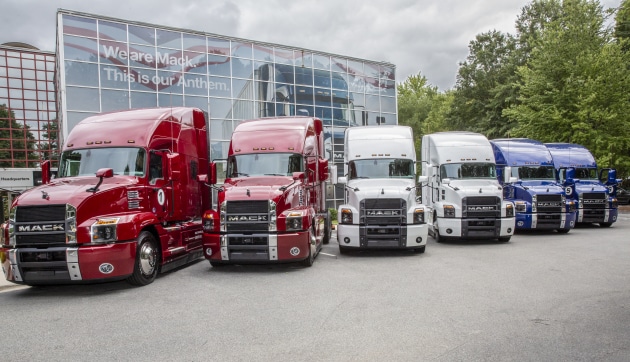 The key to the getting comfortable with the technology is to trust it, but not to expect it to do your job for you. Of course, ideally you can avoid brake applications altogether by dialing down your cruise speed when approaching slow-moving vehicles. It also seemed to pay at times, following a brake application, to deactivate cruise and feather the accelerator to return to the set cruise speed rather than letting the truck do so in a harder-charging manner.

One mild annoyance is that anytime the adaptive cruise applied the brakes, the driver must manually re-engage cruise control. This is going to be addressed with the next version of Wingman Fusion that Bendix will be releasing next year. While adaptive cruise control isn’t meant to replace the driver, it was an aid that helped me achieve better fuel economy while also providing peace of mind that I had some assistance with me in the cab in the event a sudden stop was required.  These active safety systems are proven to react faster than a human can.

By contrast, Park admitted to spending more time out of cruise control, and his driving experience enabled him to achieve better fuel economy than I did while spending almost my entire time in cruise. It goes to show an experienced driver can still outperform the machine at times.

It should be noted the Anthems on our drive should get better fuel economy once they are fully broken in, and when the predictive cruise feature “learns” the route we are traveling, committing the terrain to memory and then taking further advantage of the truck’s momentum when cresting and descending hills.

For those of us who write about trucks for a living, it’s a rare treat to get to spend three days and nearly 1,000 miles behind the wheel. I learned a few things during this opportunity, from watching our fuel economy so attentively. One is that small decisions have big consequences. It can take hours to gain 0.2 mpg, only to see it all vanish within a couple minutes if pulling out to pass a truck going uphill or increasing your cruise speed by just a few miles per hour.

We also confirmed that today’s technology can bring relative parity to the fleet, allowing even novice drivers to compete with veterans – provided they take advantage of the technology that’s available to them.

On the truck side, we learned that Mack’s ERT really works as advertised. The blue trucks with ERT were on average 4% better in fuel economy than the non-ERT red trucks, and the white tractors came in at a super-impressive 14% advantage. Mack took a risk and showed tremendous faith in the technology by allowing us to put it to the test in this manner, and I’m sure they’re pleased with the result.

I also learned that the 10-mpg truck is here today in the form of the latest model highway tractors, even for someone who has never put in time as a professional driver. It took the better part of the final leg of my drive to get it up there, and it happened on the last few miles before arriving in New Orleans, where I quickly slammed the truck into park and shut down the engine before even the slightest time spent idling had the opportunity to push me back into the nines.

Finally, I learned that a truck can boast traditional styling, some hard edges, and still deliver tremendous double-digit fuel economy. And oh yeah, I learned that Memphis really does have the best BBQ.