KIRKLAND, Wash. — Every time I have the opportunity to drive Kenworth’s T880, the truck has evolved in some way, usually with the addition of new features and options that add to its versatility.

The T880 was launched in 2013 as an alternative to the T800, a truck that generated an extraordinary amount of fanfare over its 25-plus-year run as the workhorse in the Kenworth stable. The truck maker continues to offer both models, but has already converted over most of its customers, with the T880 now representing 65-70% of the T800/T880 combined build. 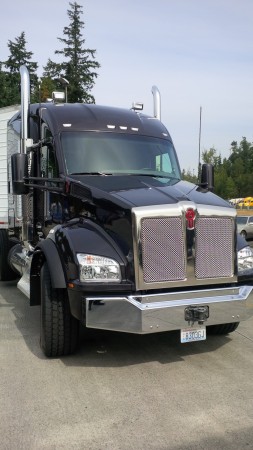 On a recent visit to Kenworth’s home base in Kirkland, Wash., I had the chance to drive a T880 up to the Paccar Technical Center in Mount Vernon, Wash., to see what it is about the T880 that’s winning over customers. The truck I drove had the newest available sleeper cab – a 76-inch mid-roof sleeper that will go into production in September on both the T680 and the T880.

Ideal for tanker, flatdeck and lowboy applications, the new sleeper is 22 inches shorter and about 100 lbs lighter than a high-roof sleeper cab. Inside, it is both functional and roomy. If you don’t require an upper bunk, Kenworth provides ample storage along the back wall. Popular features such as the swivel passenger seat are retained to offer a highly livable space. There’s still plenty of headroom, allowing a driver up to 6’8” to stand upright.

The longer sleeper cab offers more opportunities for customization. Beacon lights can be placed in several positions on the roof and you can also install roof-mounted horns. A side-of-cab exhaust option is available for those wanting to chrome up the truck.

I was pulling a traditional van trailer loaded up to nearly 80,000 lbs, but you’d normally want to hook this truck up to a lower profile trailer for better fuel economy.

My T880 had the Paccar MX-13 engine under the hood rated at its maximum 500 hp and 1,850 lb.-ft. or torque. It was sufficiently powered for any of the hills encountered on the drive to Mount Vernon and I was comfortably and safely able to pull out and pass slower trucks that were struggling on the hills. The transmission was Eaton’s MXP (Multipurpose Extreme Performance) UltraShift Plus, designed for vocational applications.

The T880 has a more modern exterior design than the T800, but it has retained a bold, heavy-duty appearance. It is said at Kenworth that ‘Every great truck starts with a great grille.’ The T880’s wire aluminum mesh grille with stainless steel surround is distinctive and durable. It has an integrated bug screen and provides ample protection for the cooling module.

A new box bumper – both chrome and painted – will soon be available, which is a popular option in Canada, according to Kyle Kimball, vocational marketing manager with Kenworth. Quarter-inch and 3/8” inch versions will be offered.

The headlights on the T880 were built for vocational environments. The halogen bulbs are easy to replace without tools and can be found at pretty much any automotive retailer, including department stores. A thick polycarbonate lens provides extra protection from rock chips. The forward lighting system was designed to give good performance down field, but also produces 50% better lighting at the immediate front of the truck to improve safety while working at dark job sites.

The front end was designed with reparability in mind. The five-piece Metton hood can be easily repaired and the fender can be removed by pulling 15 bolts in about an hour.

Exterior air cleaners aren’t available on the T880, because its wider 2.1-metre cab won’t allow it. However, you can spec’ optional pre-cleaners that reject dirt and debris out the intake before they enter the air cleaner, extending air cleaner life in dusty environments.

The hood can be lifted with just 35 lbs of effort, Kimball said, and it opens to 85 degrees for easy access. All the under-hood items that must be examined as part of the pre-trip inspection have been clustered together on the driver’s side to simplify inspections. Inside the cab, there’s a pre-trip inspection switch that cycles through all the lights, allowing the driver to check them with one lap around the truck.

Inside, the T880 offers excellent forward visibility through a one-piece windshield that’s 50% larger than on the T8. Kimball explained Kenworth also lowered the crown of the hood by three inches, which can provide up to five feet of extra visibility immediately in front of the truck.

Mirrors on the T880 are cowl-mounted, a key differentiator from sister company Peterbilt’s answer to this truck, the Model 567, which has door-mounted mirrors. Kimball said Kenworth prefers cowl-mounted mirrors because they’re more structurally stable, noting they can support 350 lbs without any risk of flexing the door or straining its hinges. The mirrors also stay in position better when the doors are frequently opened and closed, he added.

Kenworth gives drivers options for getting in and out of the truck, with two handles on the inside of the door and optional handles available on the exhaust or side of the cab. They’ve even reinforced the map pocket to support 350 lbs, knowing some drivers grab it when climbing into or out of the cab.

A new feature in the T880 is an electric-over-air system, in which all switches on the dash are electric, their communications funneled through the cab electronic control unit (ECU).

“By going through the cab ECU, it looks at what the rest of the truck is doing and will allow or not allow switches to happen,” Kimball explained. For example, it won’t allow the operator to raise a dump body when the truck’s travelling down the highway.

When the T880 hit the market, Kenworth realized it would take time to add all the options currently available on the T800, but in just two years, it now has about 95% of T8 options available, Kimball said. Some highly specialized options are all that’s currently lacking on the T880 and eventually, those will be available as well.

There are still some T8 faithful who are reticent to make the switch to the more modern T880 but Kimball said once drivers get behind the wheel, they quickly see the benefits. There are no imminent plans to discontinue the T800.

“Right now, the plan is to continue (offering both models),” Kimball said. “We’re definitely trying to convert people over to the T880 because of the features, the extra cab room and cab functionality, but we’re still offering the T800. We have a good success rate of converting people over once they get a chance to drive it.”

I have nothing disparaging to say about the T800, but in terms of drivability and amenities, the T880 is an upgrade.

Interestingly, one of the T880’s greatest attributes, its versatility, is landing the truck in some unexpected applications and even eating into the on-highway model T680’s turf. The vocational truck has found a following among on-highway customers who prefer the T880’s heavier-duty look.

“Some lighter-weight stuff, 12,000- and 13,000-lb front axles are a good portion of T880 sales,” Kimball said. “A lot of people are still spec’ing it for on-highway applications. They want that heavy-duty truck. It still fits well, but to get the most bang for your buck, the T680 is the aerodynamic leader, so we’re trying to push people towards the T680 for on-highway. But a lot of customers want that heavy-duty look and feel to it as well.”

Of course, for Kimball, having some unexpected demand from outside the T880’s anticipated market segments is a problem I’m sure he can deal with. 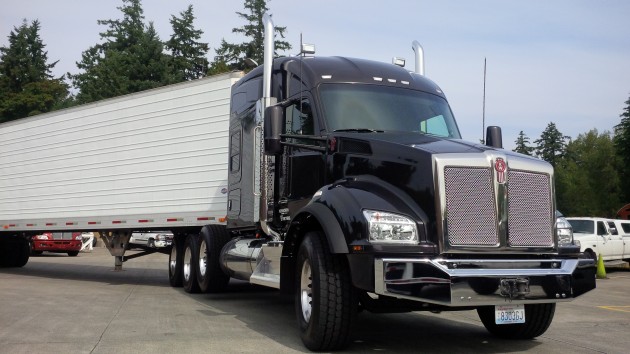