GREENSBORO, N.C. — The smartly designed new Volvo VNL has so many ‘why has nobody done that before?’ features, it’s little wonder that most of them were inspired by professional drivers. But Volvo’s global footprint also contributed to a redesign that’s comprehensively better, with ideas such as a reclining bunk, and sway bar, brought to this market for the first time from Europe.

I recently had the chance to drive a Volvo VNL 740 on a 65-mile route near Greensboro, N.C., and it was the sway bar and the vastly improved cab ride it delivered that immediately grabbed my attention.

With its new VNL series trucks, Volvo has taken the next step forward in cab ride, thanks to the addition of a sway bar offered on trucks with large sleepers. The sway bar is common in Europe, due to the high center of gravity of the cabover trucks preferred there, and their tendency to lean when cornering.

But the sway bar is evidently useful on conventional trucks as well, and provides a noticeable improvement in how cabs with large sleepers perform. I’m surprised Volvo didn’t make a bigger deal out of its sway bar, being the first OEM to bring the technology to this side of the pond. On my recent drive over a combination of Interstate and secondary, two-lane roads, the sway bar provided a remarkably smooth ride. This cab simply does not lean.

It evened out the bumps, made sharp lane changes feel more controlled, and eliminated the buffeting effect normally experienced when large vehicles pass in the opposite direction. The end result is an amazingly smooth ride, and will ensure drivers who experience a sway bar-equipped cab begin asking for one. Volvo has made the sway bar standard on VNL-series trucks with large sleepers, but it’s deleteable for those cost-conscious fleet who don’t want to splurge for the improved ride. But it’s a fairly inexpensive feature, and one that drivers will appreciate – maybe even demand – once they’ve experienced it.

In addition to the sway bar, the new VNL also offers better visibility than the truck it replaces, thanks to a hood that better hugs the engine compartment and provides better sightlines to the ground. I drove a VNL 740, powered by a Volvo D13 engine rated at 425 hp and 1,750 lb.-ft. of torque, a typical fleet spec’. I was pulling a loaded flatdeck trailer, with a gross vehicle weight of about 77,000 lbs.

The 12-speed Volvo I-Shift automated manual transmission was set up with adaptive gearing, meaning it operated in overdrive while in top gear at highway speeds, and seamlessly dropped down to 11th gear on secondary roads where I got the additional fuel economy benefits of direct drive. It’s a versatile transmission, ideal for running different types of highways or handling a combination of heavy and lightly-loaded – or empty – trips.

Another immediate improvement in the new VNL is the sound quality while cruising at highway speeds. It’s incredibly quiet, thanks to a combination of the low cruising rpms we enjoyed due to downspeeding, and new removable, rubber floor inserts that mute sound from the road and engine compartment underneath the cab. These new floor mats also make access to the engine compartment much easier; it used to take more than an hour to access the hatch, because the passenger seat had to first be removed. Now, the floor mats can be pulled out, and a technician can access the engine from inside the cab in about 12 minutes.

The new VNL was designed with plenty of input from drivers, and you can see evidence of this extensive consultation everywhere. Power outlets are located all over the place, including atop the dash where drivers tend to store their devices – eliminating the spaghetti effect of cords hanging from the dash to the area below, where power outlets have traditionally placed. There are even power outlets placed within reach of the upper bunk.

Storage trays in the new truck come with removable inserts, making them easier to clean of spills or crumbs. Storage has been added throughout the cab, and a larger 70-inch sleeper has allowed Volvo to increase the size of cabinets, as well as the fridge and freezer.

Seven different seats can be ordered in any trim level, with heated, cooled, and massaging seats available. The truck I drove had an NTL heated seat with back cycler, and was very comfortable. Everything about the truck was comfortable. The steering wheel now comes with head tilt functionality, and can be set exactly to the driver’s liking to afford the best sightlines to the new driver information display, as well as general comfort. The adjustability of the steering wheel will allow drivers of all stature to get comfortable. Some 21 buttons have been placed on the steering wheel, so drivers can access frequently needed controls without taking their hands off the wheel.

The leather-wrapped steering wheel itself is comfortable to grasp. Orange stitching gives it a stylish, sporty look. The new dash is less industrial looking than what’s often found in a commercial vehicle, and more automotive-inspired. It’s less cluttered and easier to find the gauges or switches you’re looking for.

This interior is nearly infinitely customizable. A modular frame rail allows for the placement of cupholders – big enough to accommodate a large Gatorade bottle, but adaptable enough to firmly grip a small Styrofoam cup – storage bins, or ram mounts. The door panel controls are more automotive-feeling; including the addition of single-touch window down functionality.

All interior lighting is LED, and comes in various colors for different tasks – ie., a soft blue light for consulting credit cards or paperwork, and a brighter light for reading. A puddle lamp at the bottom of the door shines down on the area below the steps when the door is opened, so drivers are less likely to slip or step into a puddle when exiting the cab.

The living environment has been completely remodeled, and can be ordered with a dinette set or a reclining bed. The two options can’t be combined at this time, but Volvo hasn’t ruled it out for the future. The reclining bed is a comfortable option for spending time in the sleeper watching TV, reading, or doing work. The dinette set may be preferred by drivers who want a formal dining area and don’t like the idea of snacking in bed.

The cab comfort controls have been moved to the back wall of the sleeper, where they’re more accessible from a lying position. The truck I drove had a 70-inch mid-roof sleeper, which was spacious and well laid out.

“The living environment was designed to improve a driver’s lifestyle while in the back of the truck,” Brian Balicki, chief interior designer, told me during a tour of a cutaway cab. When working on the interior design, he and his team consulted thousands of drivers, and also looked to the airline industry for inspiration. A direct result of this collaboration can be seen in the form of airplane-style window shades that can be quickly lifted or lowered, in the place of cumbersome snap-on covers. The new sleeper design also allows customers to spec’ a skylight, an option that wasn’t previously offered.

The D13 that powered the VNL I drove was one of the first to feature turbocompounding. It’s a waste heat recovery system that takes heat previously lost out the exhaust stack, and puts it to work powering the truck. It’s not noticeable to the driver, as the additional horsepower generated is used to lessen the load on the engine and improve fuel economy, rather than to add power and performance. Volvo says turbocompounding allows extreme downspeeding, with cruise speeds of 1,000-1,200 rpm and peak torque available all the way down to 900 rpm.

This provides up to a 6.5% fuel economy improvement when combined with 2.47 rear axle ratios, compared to a previous generation D13 with no turbocompounding, and 2.64 rear axle ratios, according to John Moore, product marketing manager. The new D13 can be ordered with or without turbocompounding, but you can expect to see about a 3% difference in fuel economy if you choose the TC version.

Moore said the D13 with turbocompounding is “the most fuel-efficient engine Volvo has ever produced.” It’s available with either 425 or 455 hp.

A new common rail fuel system in the 2017 engines also contributes to the quieter driving experience.

Volvo’s driver-centric approach to the design of the new VNL has resulted in a truck that’s incredibly comfortable to operate, and spend time in. Evidence of its consultation with thousands of professional drivers can be found throughout the vehicle. And if fleets are equally attentive to the needs and demands of their drivers, I expect Volvo will sell a lot of these new VNLs. 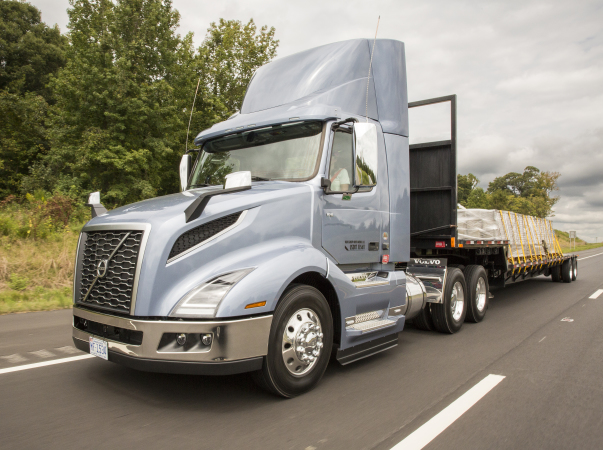