Freightliner’s new Cascadia spec’d with Detroit Assurance 5.0 is the world’s most technologically advanced truck. SAE Level 2 autonomy can be loosely defined as “hands off the wheel/eyes on the road” driving under certain circumstances. The truck can control both the pedals and the steering wheel, much like Tesla’s autopilot passenger cars do today, but the driver is ultimately still in control. And removing your hands from the wheel of the semi-autonomous new Cascadia for 15 seconds or so will result in an audible and visual warning. Refusing to acknowledge the warnings will see the steering functionality shut down, though lane keeping assist will remain in effect to prevent the truck from completely deviating from its lane. 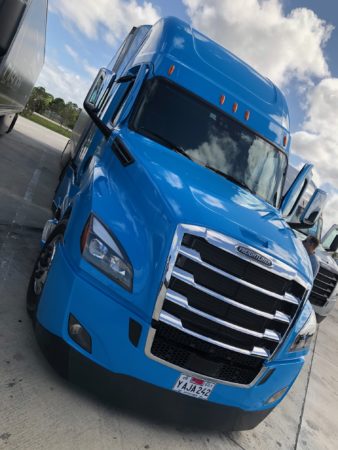 This, in a nutshell, is the most advanced level of driver assistance available in the heavy truck space, but it’s by no means meant to replace the driver. As I found during a test drive in Florida last week, the driver must always remain alert and ready to take over full control of the truck, though the technological  support was certainly appreciated.

The brains of the Level 2 autonomy in the new Cascadia is Detroit Assurance 5.0, the latest version of the company’s proprietary collision mitigation system, which now goes far beyond collision mitigation. It has evolved significantly since the first version was released in 2014 and has become much more widely embraced by customers, with 75% of buyers now spec’ing Detroit Assurance, up from 29% when first launched.

The biggest development with Detroit Assurance 5.0 was the fusion of camera technology with the previous radar only-based system. This opens up a whole range of new capabilities, one of the most interesting of which is full braking for moving pedestrians. The camera looks for the telltale hip movements associated with a walking pedestrian and can apply the brakes fully to prevent or mitigate impact.

Fun fact: The system doesn’t even look for the swinging arm movement that would easily identify a walking human, because engineers realized a person walking into the path of a semi truck could very well have both hands (and eyes) affixed to a cellphone. This is what it’s come to, folks.

Also new is adaptive cruise control (ACC) to zero miles per hour. Previously the lowest speed the ACC would take the vehicle to was 10 mph. The significance here is the driver can keep cruise control enabled in stop-and-go traffic conditions, and the truck, as long as it’s not at a standstill for more than two seconds, will creep along with the flow of traffic. It’s easy to see how this would prevent fatigue in heavy traffic situations. If the truck is completely stopped for more than two seconds, the driver need only hit the set/resume button to re-engage cruise control. 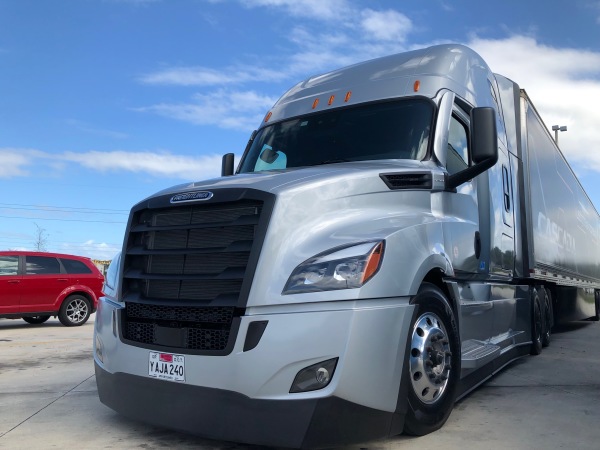 Because of the addition of the camera, speed sign recognition is another new feature. The current speed limit is constantly displayed in the driver display. This is also handy, since it’s easy to miss a change in the speed limit. Other signs the camera will recognize include do not pass and no large trucks warnings. Yield, stop signs and others aren’t currently recognized – presumably for liability reasons.

Today, the system is not set up to report speeding infractions back to the boss, but the capability could be exploited in the future. I think drivers will appreciate this feature until the day it begins narc’ing them out.

Other new features that come standard include auto-wipers/headlamps, and intelligent high beam. These are pretty much self-explanatory. A sensor in the windshield will automatically turn on the windshield wipers when moisture is detected. This allows the driver to keep both hands on the wheel. The intelligent high beam system looks for oncoming headlights, brake lights, and street lights, and will switch between high and low beams as appropriate.

All the above features are standard with Detroit Assurance 5.0, but it’s the optional features that take the new Cascadia to its SAE Level 2 autonomy designation and make it different than any other truck on the market.

The next step: Level 2 autonomous driving

Active lane assist is what makes the new Cascadia semi-autonomous, and there are two elements to this: lane keep assist and lane departure protection. Lane keep assist offers steering help, using the camera to identify the lane markings and then steering the truck within its lane.

The new Cascadia is the first truck to offer automated steering, and it’s billed as being so precise you can even set it to a left, center, or right bias. When the system is active, a blue icon on the driver display signals as much. When the system loses confidence, or lane markings are not present (such as through an intersection), an audible alert sounds, the blue icon turns grey, and the driver must take full control of steering. Automated steering is provided by a steering gear mounted to the steering shaft.

Lane departure protection builds upon Detroit Assurance 4.0’s lane departure warning system, by supplementing audible alerts when a truck is leaving its lane, by actively steering the truck back into its lane.

When lane keep assist is deactivated – either because the camera has lost the lane markings or the driver has taken his hands off the wheel – lane departure protection remains in effect, to keep the truck from leaving its lane.

I drove the new Cascadia for nearly two hours and quickly gained trust in the system, but found it far from perfect. These were pre-series production trucks and I found the truck wandered within its lane more than I expected, sliding to the left and then correcting and bouncing back to the right. The steering wheel was busier than it would normally be, making frequent minor corrections. And there were times I missed the audible alert and noticed lane keep assist was disabled only when the truck began to drift. This is why you must keep your hands on the wheel, but I wanted to test the capabilities of the system so kept the wheel loose within my grasp for most of the drive.

Despite some minor imperfections, it did give me some extra comfort knowing that if I did get distracted and took my eyes off the road momentarily, this system would be there to bail me out. And I suspect the precision will be much better dialed in before production commences in the fall. This is the point I can’t reiterate strongly enough: This is intended to be a driver assistance function, not to relieve the driver of his driving responsibilities. That must be remembered to avoid disappointment. The driver must always remain attentive and in control.

Case in point: We missed the entrance to the freeway and found ourselves in a busy town where the only apparent way to get back on route was to perform some precision maneuvering to get the truck pointed back in the right direction. No level of autonomy available today could’ve handled that requirement. So, make no mistake: This is not a system that will replace the driver, or allow the driver to read a book, or to enjoy a little shut-eye. That’s why the system will protest when a driver takes his hands off the wheel for more than a moment.

Other new optional features in Detroit Assurance 5.0 include side guard assist, which uses radar to look for vehicles, pedestrians or other objects (such as light poles) along the passenger side of the truck and the full length of a 53-ft. trailer. A yellow or red light on the door pillar, another on the driver display, and an audible alert will help to prevent impact with any such object. This would be a must-have option for me in regional haul applications, and a nice-to-have on the highway.

Show me a driver who’s never had his heart skip a beat when hearing the horn from a slippery motorist who snuck into his blind spot.

A driver-facing in-cab camera is another new option, as is video capture capabilities when an incident occurs. Daimler has teamed with Bendix to provide this footage through its SafetyDirect online portal.

I already mentioned my impressions of the automated steering: I appreciated the support and liked the technology, but felt I could steer the truck more smoothly on my own. I was, however, extremely impressed with the adaptive cruise control. It’s a highly intelligent system that doesn’t brake unless absolutely necessary.

If you have driven early generation versions of trucks with adaptive cruise control, you probably didn’t like them. Radar doesn’t have eyes and didn’t always know when a car cutting in front of the truck was an actual impediment and it often applied the brakes too readily. That’s no longer the case. If a car pulls in front of you but is moving at a higher speed, the ACC won’t apply the brakes, knowing the gap will soon be restored to the set distance. I experienced only one jarring brake applications with the ACC, and it was needed, because the car that pulled in front of me was slower than the truck.

This ACC system is slick and I wouldn’t want to be stuck in a truck that didn’t have it. Automatic wipers, intelligent high beam, side guard assist, ACC to zero, and even traffic sign display are all features that make a driver’s life easier and time behind the wheel less fatiguing.

And that’s what should be remembered here: Detroit Assurance 5.0 isn’t just about preventing collisions anymore, it’s also about enhancing the driving experience. With the trucking industry struggling to attract new blood, and retain the talent it has, it’s these technologies that just may be the ticket to making the career a whole lot more palatable to today’s tech-savvy youth. 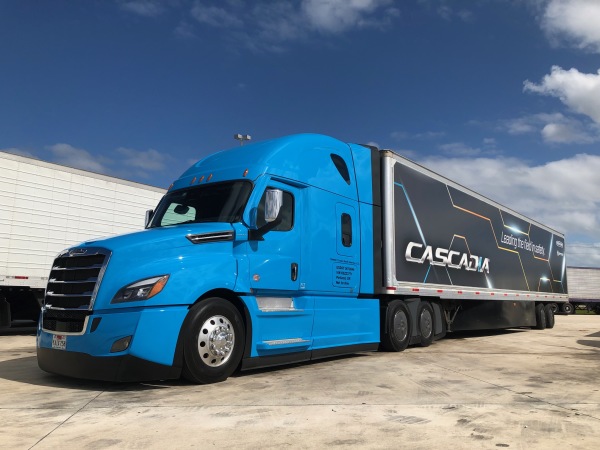