ALLENTOWN, Pa. — Mack construction truck customers who were clamoring for an opportunity to get an mDrive automated manual transmission in their Granite, are now in luck.

But it won’t be the same mDrive that’s now being ordered in about half of all new Mack Pinnacle highway tractors. John Walsh, vice-president of marketing with Mack, told trucking journalists this week that the company resisted the temptation to rush the mDrive into more rigorous construction and heavy-haul applications, even though the customer demand was there. He said putting the highway mDrive into construction truck applications, if it were to underperform, could disrupt the positive vibes the mDrive is generating among the highway crowd.

So Mack prudently developed a new mDrive specifically for construction and heavy-haul applications, and is currently rolling it out in the Mack Granite and Titan by Mack.

“This really is designed for construction applications,” Walsh said. “We didn’t take the mDrive we’ve been using on-highway and stick it in the Granite and Titan. There are significant changes to the transmission.”

Mack reinforced key components within the mDrive to ensure they’d stand up to the frequent shifting, high operating temperatures and heavy payloads seen in construction and heavy-haul applications. Gears were hardened. Synchronizers were reinforced. A high-viscosity oil was used to better dissipate heat and protect internal components. The oil cooler was moved to the side of the transmission, eliminating the need for piping from the radiator to the transmission and making it easier to remove the transmission if necessary.

“Externally, you won’t see a difference,” Stu Russoli, highway and powertrain marketing manager with Mack said. “But if you were to take it apart, you’d find we upgraded the interior.”

The shell is the same, but the guts of the transmission are anything but.

The mDrive is a 12-speed automated manual transmission that’s fully integrated with the Mack MP-series of engines. It features a dash-mounted push-button shift console but also displays the current gear and other information of importance in the driver communications center.

Curtis Dorwart, vocational marketing manager with Mack, said the benefits of this integration include the ability to have the transmission serviced at any Mack dealer.

“You have an integrated product, serviceable by our dealers, with no third-party necessary,” he said.

The mDrive HD compares favourably to Allison automatics in terms of acquisition cost, weight, fuel economy and serviceability, Dorwart claimed. It’s been made standard on the Granite and Titan, but customers can still opt for a manual or fully-automatic transmission. Sometimes, acknowledged Russoli, this is necessary, though he said the mDrive can currently handle about 85-90% of all construction applications.

“If you’re hauling really heavy – we have customers in Texas hauling more than 200,000 lbs – I think you want the extra steps,” he said. “We’re using our 18-speed manual there. I wouldn’t tell anybody this is the only transmission they’ll ever need; there are certain applications where you may need others.”

Still, the mDrive HD is a transmission that’s loaded with capabilities and not out of its element on a construction site. To prove this, Mack made several trucks – a pair of Granites with dump bodies, a Granite cement mixer and a Titan heavy-hauler – available for some on- and off-road driving at its Allentown, Pa. Customer Center. The Titan carried a 100,000-plus-lb piece of construction equipment on a lowboy trailer and – because of the oversize permits required – it was confined to on-track demonstrations only.

I grabbed a Granite dump truck for a drive on neighbourhing highways and winding, beat-up Pennsylvania rural roads as well as the punishing off-road track at the Mack Customer Center. The highway is a great place to get a feel for the Granite itself, the power available from the MP8 engine and the smooth shifting of the mDrive HD. But the track – where the real-world rigors of construction and heavy-haul trucking can be replicated – is where the product really shines.

The mDrive HD is available in three different shifting configurations: Enhanced Construction for your typical construction applications; Heavy-Haul for heavier payloads, boasting a full-on torque strategy and little or no skip-shifting; and EZ Shift, for sensitive loads such as unbaffled tankers or livestock. The shifting configuration is specified at the time of order but can be changed by a Mack dealer at any time, including at resale.

The transmission has three vital features that are designed for construction applications. Grade Gripper uses the ABS to hold a truck in position on a grade for three seconds while a driver moves his foot from the brake to the throttle. I drove a Granite with Grade Gripper and one without, stopping them both halfway up a 15% grade. Doing this without Grade Gripper is an unnerving experience – especially in a manual transmission – but Grade Gripper lessens the anxiety and provides ample time to make the transition to the accelerator.

Grade Gripper can be deactivated using a switch on the dash if you need to roll backwards.

Power Launch is another invaluable feature, which we tested in a bed of loose gravel. It offers an extra shot of rpm to get the truck out of a sticky situation, whether it be entrenched in mud, gravel or snow and ice. When stuck in some material, the driver locks in the differentials, sets the transmission to Drive mode, then hits the Performance button on the shift console, putting the transmission into first gear.

The driver then pushes the Minus button and holds that while pressing the accelerator to the floor. The engine will rev to 1,300 rpm and then when the Minus button is released the truck launches free of whatever mess it was in. It worked wonderfully in the gravel but some training will be required to educate drivers on when and how to use this feature.

‘Wouldn’t a Power Launch button on the shift console be easier to use?’ I asked Russoli, but he pointed out the feature could be prone to abuse if it’s too convenient. He may have a point. Power Launch is fun. I’d be launching all over the place – at least till the novelty wore off.

The other construction feature offered in the mDrive HD is Rock Free, for those times the truck is stuck and Power Launch isn’t enough to get it unstuck. This is harder to demonstrate without truly bogging the truck down in mud, so I asked Russoli to talk me through the process.

“You put on your differential lock and make sure your traction control is off, because you want the wheels to spin a bit,” he explained. “You hit the Performance button, hit Drive and depress the accelerator about halfway and let it off right away, so the truck drives forward and then rocks rearward. You pump the accelerator like that several times, it elongates your footprint in the mud or stone and eventually you can drive out.”

Just like pushing a car out of the snow. This feature addresses a concern construction truck operators frequently voice about automated manual transmissions: ‘But what if I get stuck?’

Drivers can still have input into gear selection thanks to Performance and Manual modes. Manual mode allows the driver to up- or downshift at will, assuming the desired gear selection is reasonable. Small up and down arrows beside the gear display in the dash let the driver know when it’s okay to shift, and by how many gears. 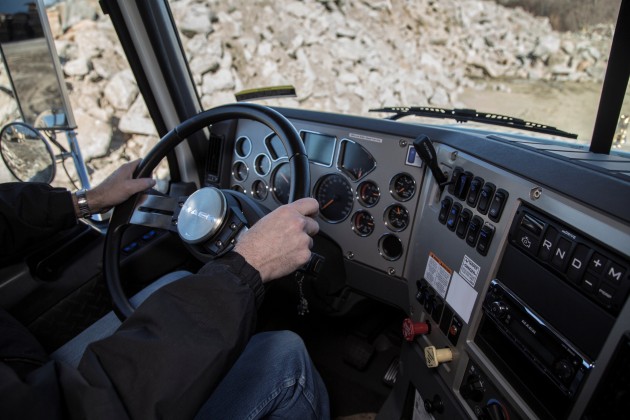 “It will hold your rpms longer to give you a broader band where the torque is,” Russoli explained. “It will hold you in that range as long as possible before the next shift, so you’re always in full torque.”

Performance mode is excellent for charging up a hill or accelerating with a heavy load but it does compromise fuel economy, so while drivers will love it, fleets will want them to use it sparingly. While there’s a perception that automated manuals are so easy to operate, all the driver has to do is press D and go, to get the most out of the features built into today’s AMTs some driver training will be required.

Another feature I loved on the mDrive was MaxBrake, which forces a downshift and then activates the full engine braking power offered by the PowerLeash engine brake. I had the chance to use this feature extensively, after venturing off the highway and traversing a winding, hilly, horse-and-buggy-warning-sign-lined, shoulderless stretch of back road. MaxBrake offers obvious safety benefits and the engine brake is quiet enough so as to not disrupt sleeping neighbours while you’re out there pounding the pavement before sun-up. This Granite was as Mack as you can get – engine, transmission, axles, carrier – and that’ll earn you a gold bulldog for the front of the hood. I think we’ll be seeing more gold bulldogs on construction sites with the mDrive HD now available.

Back at the track, I drove the Granite over an extremely punishing off-road course and while I emerged from the cab a little shaken up, the truck was none the worse for wear. During its development, the Granite was driven over this course for hundreds of hours, though thankfully for the test center drivers, the harsh inputs can now be measured and replicated by computer simulation.

The Granite itself is the same Granite that customers seem to love. In the US, Mack likes to point out it’s the top-selling Class 8 conventional straight truck. That’s citing Polk data, which doesn’t include the Canadian market, but there’s little reason to believe it would be any different here.

The Granite’s a bona-fide workhorse. Some subtle driver-friendly changes have been made to the truck in recent years (ie. a new signal light stalk with self-cancelling turn signals), but it hasn’t undergone a comprehensive overhaul in some time. It really hasn’t needed one.

Full production of the mDrive HD will begin in May, but it’s been built in limited quantities since the end of January.