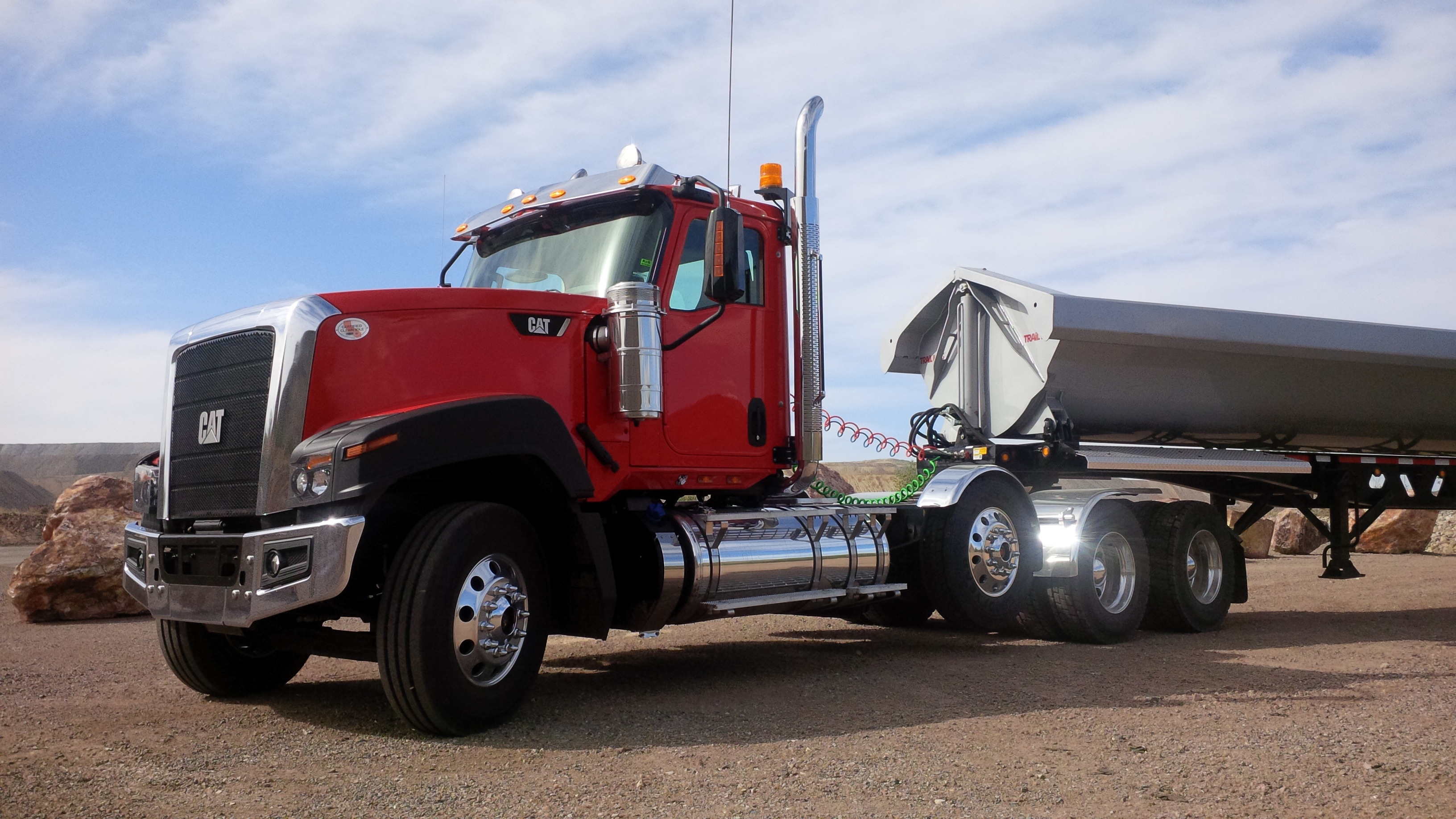 TUCSON, Az. — It felt counterintuitive, even ill-advised, but I put my faith in the Cat guy sitting in the passenger seat and stopped the CT680 halfway up a long 18% grade topped with loose gravel.

Brad Zingre told me to transition from brake pedal to throttle and slowly depress the accelerator – don’t mash it. I did as he instructed and the truck eased effortlessly up the grade, as though it were flat and as though there weren’t 28 tons of boulders inside the side-dump Trail King trailer we were pulling.

“This engine’s stout!” he beamed.

This demonstration, conducted at Caterpillar’s sprawling 6,500-acre Tinaja Hills test centre and proving grounds south of Tucson, Az. was the grand finale in a day-long demonstration of the CT680, the newest addition to Cat’s line of Class 8 vocational trucks. Cat got into the truck business in 2011 with the introduction of the sleek, set-back axle (SBA) CT660. 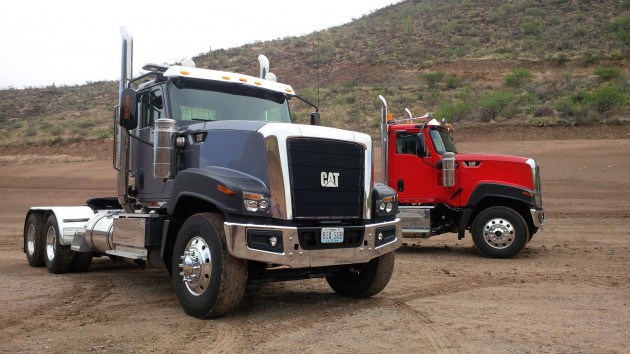 A pair of Cat CT680s in the Arizona desert at Cat’s TInaja Hills proving grounds.

It followed that truck up late last year with the pug-faced CT681, a set-forward axle (SFA) no-frills truck designed to be functional, if not beautiful. The brand new CT680 rounds out the line and features the longest cab of the family, with a 124-inch BBC (bumper-to-back-of-cab) measurement, just slightly longer than the CT660 and a full 10 inches longer than the CT681.

This time, Cat is smartly offering the new truck in two exterior styling configurations – one for image-conscious customers who care about ease of repairs and another for those who are resigned to the fact their truck’s going to get banged up and probably aren’t too worried about it.

The CT680L is the truck you’d bring to the show’n’shine. It features a three-piece Metton hood, three-piece chrome bumper and three-piece stainless grille surround. These give the truck a distinctive look and damaged sections can be easily replaced so the truck can be kept looking good throughout its life.

The CT680LG comes with a one-piece fiberglass hood, three-piece black bumper and integrated fiberglass grille surround. It’s a plain Jane CT680 but every bit as capable of getting the job done. Both can be had with dual external air cleaners, for easier serviceability in dirty environments and for that classic-styled look befitting a truck with a long, square hood. The other key difference between the two offerings is in the lighting: The L features composite halogen headlights and incandescent park/turn signals, while the LG comes with sealed-beam halogen headlights and LED park/turn lights. 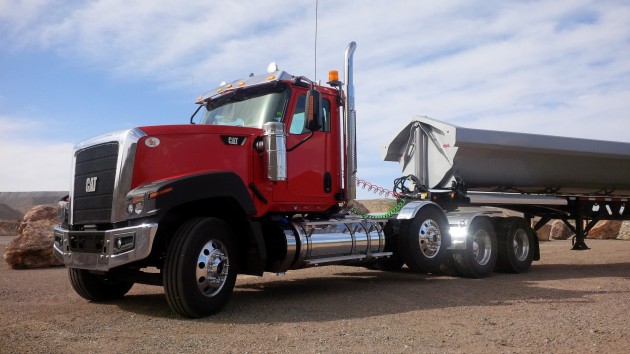 We drove this Cat CT680 with 28 tonnes of boulders in the Trail King trailer.

Naturally, Caterpillar chose to make the sexier CT680L available for rides and drives in mid-May. I was awfully happy to get one in Viper Red, because what could be more appropriate for a drive in the Arizona desert?

Cat officials revealed at the CT680 launch that a 15-litre is coming later this year. Both the CT660 and CT680 were designed to accommodate it and Cat’s CX31 automatic transmission, rated at 1,850 lb.-ft. of torque, can too. While they were tight-lipped about who their engine partner will be, there’s really only one possibility and the bigger question would be: will it be painted red or yellow? We’ll have to wait to find out, but the 15-litre engine will be a welcomed addition, especially here in Canada.

Even before climbing inside the CT680, it’s clear Caterpillar engineers have had their way with this truck and where appropriate, they haven’t been shy about straying from industry norms. The hood opens differently. Instead of mounting a grab handle to the front of the hood and requiring drivers to plant their foot on the bumper and heave it open, they’ve placed two handholds along the side, allowing for easier lifting. 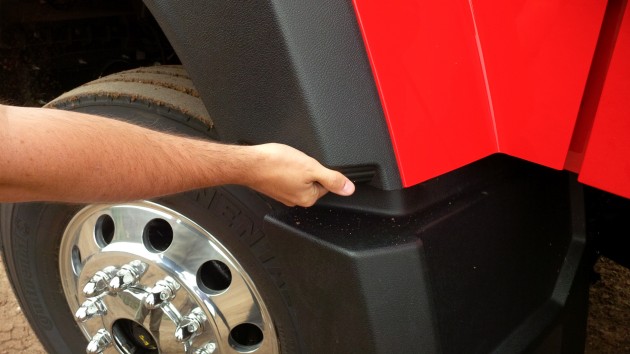 Handholds on the hood make opening it easier.

The exterior grab handles are textured for a better grip when climbing into the truck, though the external air cleaners on the one I drove seemed to limit the door opening. Even so, climbing in was no problem.

The interior of the cab is where Cat really went to town with this truck and evidence of this can be seen everywhere. Round vents are said to deliver more efficient heating and cooling and on my drive in the Arizona desert the A/C kept the cab comfortably chilled.

The gauge cluster has been carefully arranged to ensure the most important gauges are always visible through the steering wheel. This includes consolidating the speedometer and tach so that both road and engine speed can be determined with one, quick glance.

Extra wide rocker switches snap authoritatively into position, making them easier to activate with gloves on.

“They’re nice and wide and you get a nice tactile feel with those switches, so you can tell you’ve engaged that switch and you can keep your eyes on the road,” Zingre explained.

They’ve also been logically placed on the centre stack, with the most frequently used of those switches located closest to the driver. And the centre stack itself is angled towards the driver, providing a cockpit feel with everything within easy reach.

The CT680 I drove featured a one-piece windshield but if you’re worried about chips and cracks, a two-piece is available. A long, flattish hood extends in front of that windshield but all-around visibility isn’t bad. The cowl-mounted sideview mirrors have been positioned far enough back to afford a good left-right view at intersections and also excellent visibility of the space around the truck and trailer. Those mirrors are heated and also feature an integrated turn signal. 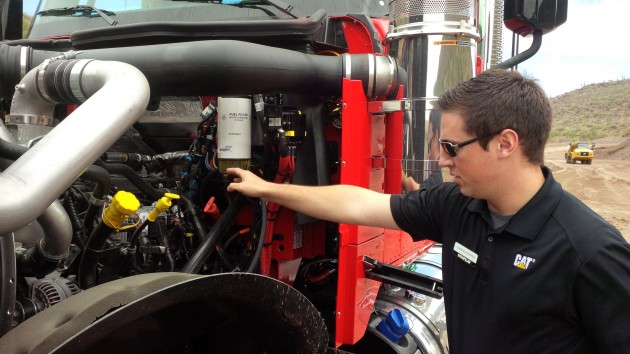 One small detail I didn’t like is that the signal light stalk was a bit of a reach from the steering wheel; you pretty much have to take your hand off the steering wheel to activate the turn signals, rather than flicking them on with one finger while keeping both hands on the wheel.

The CT680 was comfortable to drive. It seemed everything was just right in terms of driver comfort – the positioning of the elbow rests, the angle of the dead pedal, etc. The seat was comfortable and the ride was smooth.

The interior has an automotive-type feel to it, with soft-touch materials that look and feel nice but are also easy to wipe clean. The standard leather-wrapped steering wheel is just one example of this, but other examples can be seen throughout the cab. Even the flooring has extra matting to provide better insulation from ambient sound and noise. The CT 13 is a quiet engine and combined with the well-insulated cab, this is a quiet truck to operate.

As for drivability, I really enjoyed the CX31 transmission produced by Cat itself. It’s a six-speed torque converter-style automatic transmission that communicates well with the CT 13 engine and provides seamless powershifting. Cat claims this transmission boasts the industry’s best power-to-weight ratio.

The shift console is located fairly far back on the driver’s seat, so that you have to turn your head a full 90 degrees from the road if you want to confirm the gear you’re in, but there’s little need to fret about gear selection with this transmission; it’s on the mark, all the time.

About 50% of Cat trucks are being ordered with the CX31, but Eaton automated and manual transmissions are also available as options. The engine, with its graphite iron block, weighs up to 200 lbs less than other 13Ls on the market and coupled with the aluminum alloy cab provides a total weight savings of 400-600 lbs. That can be converted straight into revenue-generating payload. 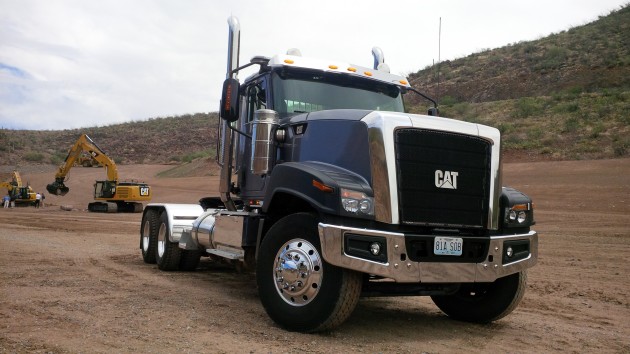 The Jake brake on this truck was incredible – and incredibly quiet, at least from inside the well-insulated cab. The route we drove was fairly hilly and we were heavily loaded but I seldom required the maximum engine brake setting. Off-road, it kept the truck reined in down an 11% grade, no problem.

The ride quality was also exceptional. Cat guys attribute this to the parabolic taper leaf spring suspension that’s standard on this truck and now an option on the CT660.

Any lingering perceptions that this is an International truck with a Cat logo on the hood are grievously inaccurate. Yes, Navistar provided the donor chassis upon which the CT-series trucks were built but it’s a true, genuine Caterpillar piece of equipment. As such, it can be serviced through Cat’s network of 400 dealers in the US and Canada.

Back at Tinaja Hills is where Zingre saved the best for last – a demonstration of the CT 13’s pulling power. As already mentioned, the engine easily passed this test. Zingre, who comes from a trucking family where horsepower was always king, said many customers are surprised by the power put out by this 13-litre engine. The truck I drove was rated to 120,000 lbs GCW.

However, he also acknowledged there’s a time and place for 15-litre power and that is especially true in Canada.

The new CT680 rounds out Cat’s vocational truck line and gives it more complete coverage of the segment. Offering it in two exterior stylings also gives this model broader appeal to what is a diverse customer mix. Add to that a proven 15-litre engine and it seems Cat is poised to become a bigger player in the vocational truck segment.