DENTON, Texas — It wasn’t long ago, fleet operators had trouble getting their heads around a 13-litre engine being sufficient to haul required payloads. The 15-litre was king, and it still is in many parts of North America, especially here in Canada.

However, the 13-litre has made significant in-roads into the North American market and now the 11-litres are coming. Paccar recently announced introduction of its MX-11 engine, a 10.8-litre powerplant available with from 335-430 hp and 1,150-1,550 lb.-ft. of torque. 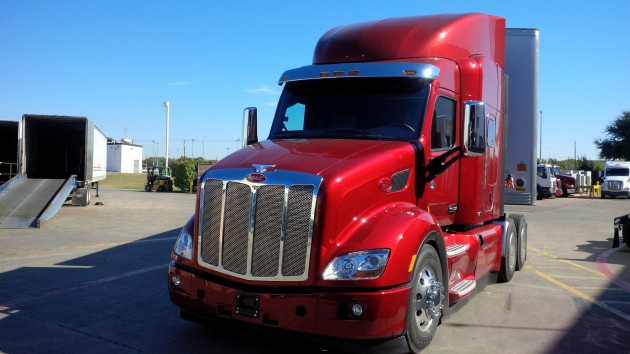 I recently had the chance to drive a Peterbilt 579 with EPIQ package and the MX-11 engine in and around Denton, Texas, where Peterbilt builds these trucks. The engine itself is built in Paccar’s Mississippi engine plant and though it was born in Europe, just more than a year ago, many of the engine’s components are manufactured in Mississippi and then shipped to Europe for installation. So the engine does have some significant North American DNA in it.

The MX-11 sold here will be further configured for North American duty cycles.

The engine is currently undergoing field testing with a variety of fleets with full-scale production and installations set to begin in January. It is limited to a gross combination weight of 80,000 lbs and that will rule it out for certain lanes and applications in Canada.

However, Anthony Gansle, Peterbilt’s marketing manager for on-highway products, says it will be ideal for regional haul and vocational applications, or on weight-sensitive bulk routes. The MX-11 weighs about 400 lbs less than the MX-13, which is itself about 400 lbs lighter than a 15-litre. If you can convert that weight savings directly into payload, the 11-litre becomes very compelling. It’s also a nice alternative for fleets currently spec’ing a 9L but wanting a little more power.

But you also want to be careful where you deploy it, especially when downsizing from a 13-litre. The engine pulled well on my drive in Texas, but our route was devoid of much in the way of hills. We were loaded to about 63,000 lbs, which is pretty typical for line-haul applications.

The MX-11 I drove was rated at the maximum 430 hp and 1,550 lb.-ft. of torque. It never felt lacking for power. But this was Texas; I’d be reticent to spec’ this engine in a truck that’ll be crossing the Roger’s Pass with regularity.

That said, there’s a place for it. If you’re hauling light loads on flat roads, an 11-litre engine with 430 hp may well be all you need. Paccar says the engine will provide the same reliability that customers have come to expect from the MX-13. Like its 13-litre brother, the MX-11 has a B10 life of a million miles, which means 90% should go that far without requiring any significant overhaul.

There’s lots of parts commonality between the two engines. The biggest difference in the design is that the MX-11 features an overhead cam while the MX-13 has an in-block cam.

The engine was extremely quiet on my drive. This is the result of a well-built cab and also an overall quieter-running engine. 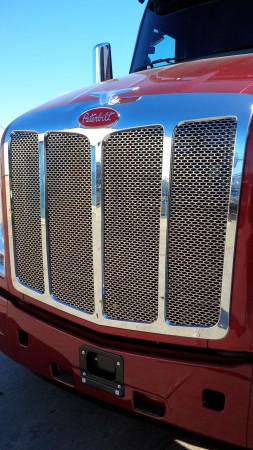 The transmission was a 10-speed Fuller Advantage Series automated manual. That’s the one with no oil cooler, contributing to overall fuel economy improvements thanks to its lighter weight and the reduced oil churn-related friction within the transmission. The powertrain featured the new Neutral Coast option, which disengages the transmission on slight declines to save fuel. It was also equipped with Predictive Cruise, which better utilizes the truck’s momentum on grades to save even more fuel.

The truck I drove was nothing short of stunning to look at. The Model 579 EPIQ featured all the latest fuel-saving technologies. It was painted in a new colour dubbed Legendary Red. Gansle said he took Peterbilt’s traditional red to the paint shop and said he wanted them to make it sparkle in the sun like a bass boat. The paint pros layered glass on metal to give it that dazzling glimmering effect when the sun hits it. There are now 10 Legendary paint colours available.

The 579 was also comfortable to drive. It was decked out with all the options, including the premium interior. The leather seats and steering wheel were stylish and comfortable. In fact, all touch points screamed quality. Even the rocker switches snapped authoritatively into place. The door closed with a passenger car-type whoosh and created a seal that minimized wind noise. 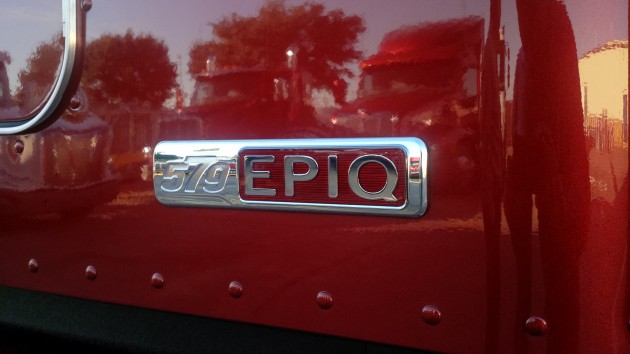 The fuel-saving EPIQ package has seen a few slight changes since I last drove a Peterbilt 579 late last year. Initially, a tire pressure monitoring system was required to qualify as an EPIQ spec’, but customers were luke-warm to that option and so now Peterbilt’s SmartAir battery-based no-idle system can be chosen in its place.

Peterbilt is also expanding the chassis fairings available as part of the EPIQ package. A chassis fairing that covers the tandems is now in pre-production, offering slightly greater fuel savings than the original, which stopped at the rear of the sleeper cab. And early next year a fairing will be launched specifically for day cabs, which ends at the back of the cab.

The truck I drove had a 58-inch sleeper, a new option for the 579, which is ideal for drivers who won’t be living out of the truck but want to be comfortable those few nights they’re away from home. The sleeper cab was nicely appointed with a flatscreen TV, mini-fridge and sufficient storage.

Fleets that were lucky enough to be involved in field testing are reporting back good numbers in terms of fuel efficiency and performance, according to Gansle. He sees a lot of opportunity for the MX-11.

“We think the 11-litre will take over in a lot of those applications where the customer doesn’t need a 500-hp engine,” he said.