HEYBURN, Idaho — Just as 6×2 tractor configurations were beginning to see renewed interest and more widespread adoption, Volvo has advanced the concept with a new 6×2 with liftable forward axle that provides even greater fuel savings and much better handling in adverse weather.

Volvo Trucks demonstrated last week its new 6×2 with Adaptive Loading on a run between Brigham City, Utah and Heyburn, Idaho. While Volvo’s previously available 6×2 tag axles maintained contact with the ground at all times, its Adaptive Loading system raises the dead axle when lightly loaded to operate in a 4×2 configuration. 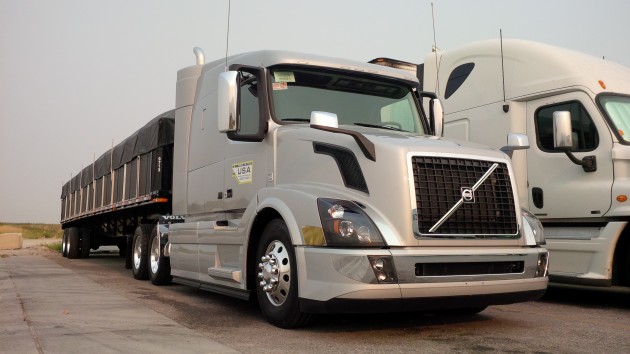 Doing so reduces rolling resistance for improved fuel economy but also provides a smoother, safer ride thanks to the system’s ability to adjust load distribution based on the weight of the load. When the truck is lightly loaded, the forward axle raises four inches to operate in 4×2 mode. I drove a Volvo VNM day cab with a gross weight of 34,820 lbs, axle up, and the handling was excellent. With the axle raised, you get the benefit of a longer wheelbase and the system automatically shifts the optimal weight to the steer axle for improved steering. The driven axle maintains a better footprint with the road surface because it’s not sharing the load with the tag axle as it would in a traditional 6×2, or with another drive axle as would be the case with a 6×4.

Customer who have experience with Volvo’s 6×2 with Adaptive Loading told visiting journalists that the handling improvements are more pronounced in adverse weather, and cite safety as one of the primary advantages of the system.

Shane Law of Blackfoot, Idaho-based Alpine Logistics Group, recalled pulling an empty trailer in heavy rain when he considered stopping. But when he raised the forward axle, more weight was transferred to the steer axle, the wheelbase was effectively extended and “It was just like dry roads,” he said.

“We won’t go back to 6x4s,” added Gene Brice, owner of Idaho Milk Transport, citing the same safety benefits. “The safety advantage is too much.”

Chris Stadler, product marketing manager, regional haul applications with Volvo, said the system always provides optimum traction, because it dynamically shifts the weight of the load to the appropriate end points. It does this within the framework of the regulations, so it won’t overload the steer axle, which is rated at 12,500 to 14,600 lbs. The system is entirely automated and doesn’t allow the driver to raise the liftable axle when the truck is heavily loaded, which Volvo says satisfies regulatory requirements aimed at preventing abuse or misuse that could cause infrastructure damage.

In addition to providing improved drivability and greater safety, Volvo’s Adaptive Loading system also provides the efficiency benefits inherent in a 6×2 axle configuration. The non-driven axle reduces vehicle weight by about 300 lbs. This can be converted into payload or will translate into a fuel economy improvement.

Bulk haulers that take advantage of the increased payload still see fuel economy savings, due to the reduced friction and parasitic losses that result from eliminating a set of gears and also improved rolling resistance which occurs due to the optimized weight distribution. In some bulk applications, the 300-lb weight savings can generate the revenue of one additional load per year, Volvo claims.

Volvo says its customers using Adaptive Loading are seeing fuel economy gains of 3-5% compared to a 6×4. Those already using traditional 6x2s with non-liftable tag axles are seeing some modest fuel economy improvements over those systems as well. More than 100 such trucks have been produced, even though Adaptive Loading doesn’t officially go into production until next year. Two Canadian fleets are among those using the system today.

Of course, some provinces – namely Ontario, Quebec and B.C. – take a dim view of 6×2 systems with load-shifting capabilities, so consult your local regulations before placing an order. Note, the liftable axle makes it more difficult to fly below enforcement’s radar, if you’re inclined to do so.

Volvo officials said they continue to work with provincial regulators to explain the benefits of 6x2s and to educate them on the safeguards against misuse that have been built into the systems.

Some customers are citing a savings of 0.8 cents per mile in fuel, which translates to about $2,000 per year, Stadler said. For Ploger Transportation based in Bellevue, Ohio, the total savings amount to about $11,000 annually per vehicle, according to Joel Morrow, whose general freight operation is among the most mainstream of those we chatted with in Idaho.

“Our focus is efficiency,” he said. “We are a small carrier, we have no economies of scale working for us. The only thing we have is efficiency and without it, we’re dead in the water. Fuel mileage is a matter of pride with us and we like to think we’re one of the best companies out there in terms of fuel mileage.”

Morrow read about the widespread use of 6x2s with liftable axles in Europe and approached every North American OEM in pursuit of a partner that would work with his company to bring the technology here.

Ploger’s trucks are loaded about 90% of the time – normally to about 60,000 lbs GVW – and often operate in bad weather. Morrow said fuel economy has improved, he’s able to get 265,000 miles on a set of steer tires and the trucks have helped with driver retention. The trucks have achieved 30-day moving averages of greater than 10 mpg, Morrow said. Productivity has improved as well, he added, since the system simplifies the coupling and decoupling process. The suspension can be raised two inches, which can help free landing gear feet that are stuck in ice or soft surfaces and makes it easier to crank up the legs. The load-shifting capability also means trucks can produce greater traction on slippery surfaces than traditional 6x4s.

“We’ve increased productivity 20% across the board,” Morrow said. “That was the most surprising thing. Most of that occurred during the winter months – guys weren’t getting stuck and they could get in and out of places.”

Fleets that haul diminishing loads or that frequently run empty are likely to see the greatest benefits, since they’ll spend more time operating with the liftable axle raised. These fleets can combine Adaptive Loading with Adaptive Gearing for further efficiency gains. Adaptive Gearing locks out 12th gear and operates in direct drive when loaded but allows for the use of 12th gear in overdrive when light or empty. Customers using Adaptive Gearing can also program in different maximum speeds based on the gross combination weight of the vehicle. 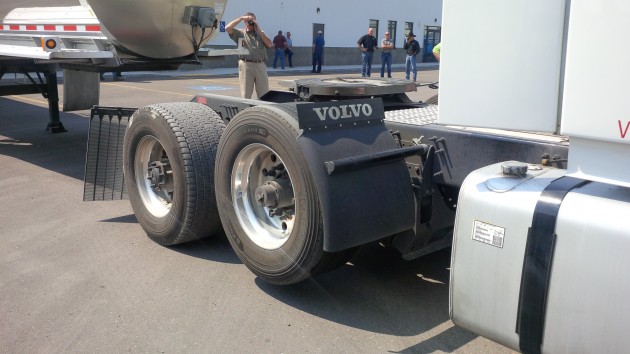 Volvo recommends an optimized tire package on its Adaptive Loading spec’ that will normally place a steer or trailer tire on the liftable axle. Alpine’s Law said he’s convinced he won’t have to replace the tires on his liftable axle until he’s ready to sell the truck, which runs empty 65% of the time.

Volvo’s Stadler said it’s not unusual for fleets to save one set of tires per year, and the benefits extend to other positions beyond the liftable axle. The steer and drive tires last longer too, Stadler pointed out, because they maintain a better footprint with the pavement and see less scuffing and irregular wear. There are other maintenance savings to be considered as well, such as longer brake life on the liftable axle. Volvo’s standard spec’ features disc brakes on the steer axle and drums on the other positions.

Load-shifting is carried out by Volvo’s proprietary control module and is entirely automated with no driver input required. The driver can, however, adjust the traction control mode based on driving conditions. Inside the cab a rocker switch allows for the selection of three traction control modes: Optimized Traction provides optimum weight distribution based on the weight of the load, biasedly balancing the weight of the axles; Enhanced Traction mode will place more weight on the driven axle, ideal for when extra traction is required (ie. when launching, climbing a grade or in slippery conditions); and Basic Traction mode distributes the weight equally across the tandem axles (ideal for loading/unloading or long-term parking).

Volvo plans to continue offerings its current 6×2 with non-lifting tag axle, but fleets we spoke to said it will likely “discontinue itself” over time, as the benefits of the liftable axle are superior. Ploger’s Morrow said a traditional 6×2 is “acceptable, not exceptional” because you “don’t get the wheelbase advantage.”

Clay Handy of Handy Truck Line based in Paul, Idaho, said the only challenge currently with Volvo’s 6×2 with Adaptive Loading is getting enough of them into the fleet, since it’s not yet in full production. Those are some pretty strong endorsements from some pretty no-nonsense fleets that meticulously track their costs.

Driving a loaded Volvo VNL with sleeper cab back to Brigham City, Utah was an unremarkable experience; it drove like any other I-Shift-equipped VN, which is to say, extremely comfortably. The truck felt well balanced and it steered and braked nicely. But it’s with a light load or no load – and counterintuitively, in bad weather – that the Adaptive Loading system really shines, according to its everyday users.

Six-by-twos, once seen as a niche specification that can deliver modest fuel economy gains, now provide the added benefits of superior handling and improved safety.

Notwithstanding archaic regulations in some Canadian provinces that prohibit the use of 6x2s based on outdated perceptions, Volvo has raised not only the axle, but also the bar when it comes to 6×2 technologies. 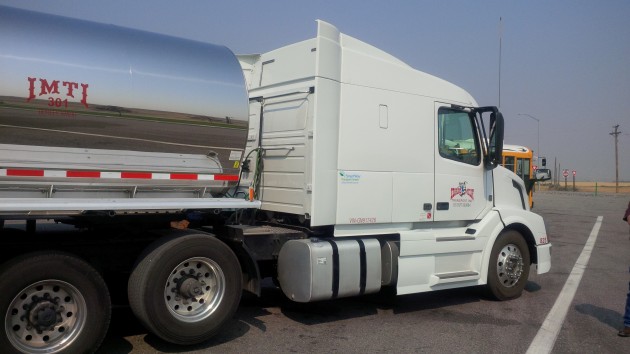