That’s the mostly unspoken but highly evident sentiment from Mercedes-Benz, which is unleashing its mid-sized alternative to the popular Sprinter commercial van in October of this year.

“The target group is really commercial customers,” said Mathias Geisen, general manager, product management and marketing, for Mercedes-Benz Vans USA, adding with a smile that “We will not keep anyone from buying this van, because we’re paid to sell cars.”

Geisen noted the company has a “real mini-van variant in Europe, the V-Class, but it has a completely different instrument cluster, plus leather trim and stuff like that.” There are no plans to bring the V-Class to North America at this time. 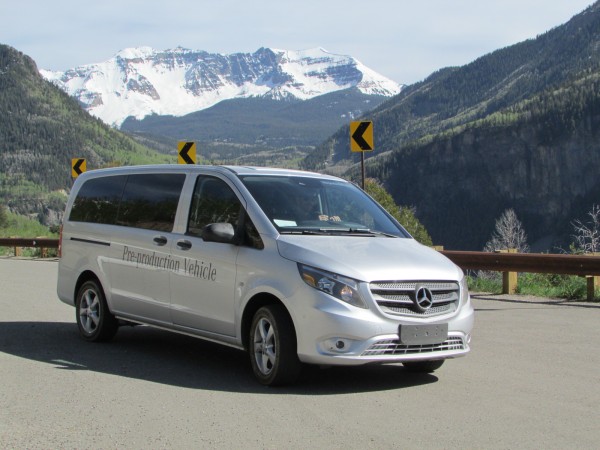 Since the Metris is aimed at commercial customers, differences between it and a consumer van include such touches as a more utilitarian interior that’s designed to be cleaned easily and which doesn’t include typical Mercedes luxury touches such as leather and higher quality plastics. The interior is still typically Mercedes, however; if you’re familiar with contemporary Mercedes-Benz instrument panel and control layouts you’ll be right at home with the Metris.

The German vehicle-maker flew a gaggle of journalists into Durango, Colorado for a press preview, from which point we were hustled into a collection of Sprinters and pre-production Metrises – or is it Metri? – for a two-plus hour drive to a luxury hot springs resort in the middle of nowhere, about 13 kilometres past the end of the pavement.

We not only got to learn about and experience the new Metris, but also got some additional seat time and insight into the Sprinter and some of its many possible configurations.

The event included a three-plus hour road trip around the southern end of the Rocky mountains, along some fabulous driving roads (accompanied by scenery that included some spectacularly winding and challenging mountainous and “foothilly” sections that tested the mettle of the vans and their drivers), culminating with a luncheon at the ski resort of Telluride, at a top-of-the-world restaurant looking down on the village from an elevation of about 11,000 feet.

The routes would have been perfect for some of Mercedes-Benz AMG sports models, but such is the basic goodness of the Sprinter and the Metris that at least some of the jaded automotive press members remarked about how great – and how car-like – the vans drove despite their size. That didn’t mean we didn’t pine for sports cars, however…

Granted, the vans were empty of payload, so it isn’t known how spry they’ll be when loaded for action, but given how the high altitudes and accompanying thin air challenged the vehicles’ performance, they’ll undoubtedly work as advertised.

Mostly, anyway; I drove back to Durango for the flight home in an unladen four cylinder Sprinter that had been converted into a nifty little dump truck and though it drove well empty, I thought it might have been better on the hilly sections with the V6 diesel and its extra oomph. That said, I never had issues keeping up with or passing traffic.

The Metris is a rear wheel drive alternative to such other small vans such as Ford’s Transit Connect, Nissan’s NV200 SV and the RAM C/V Tradesman. It’s designed to bridge the gap between mini-vans and, well, maxi-vans such as the Sprinter.

“We decided to go for a mid-sized van because we think it’s the right size to fit into the marketing requirements (in North America),” Geisen said. “We think this size makes a lot of sense for the customer. With the Metris we are able to combine the small footprint with the capabilities of the large vans and we think this segment is really the right one, especially when it comes to handling – the van offers good payload and good cargo capacity (for driving in) crowded cities.”

Geisen’s “crowded cities” comment pointed toward another capability of the Metris that the company thinks will be important to commercial customers. 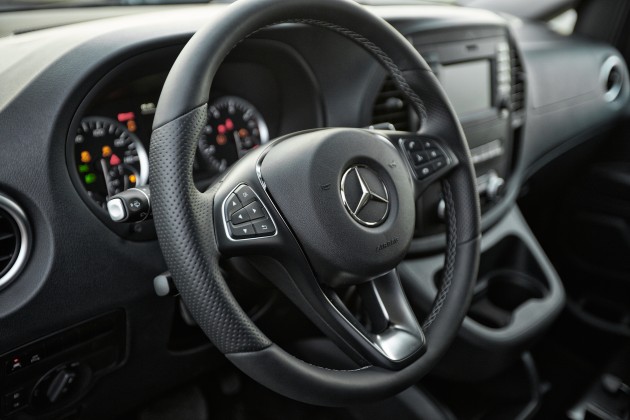 “The important word is garage-ability,” said Bernie Glaser, vice-president and managing director of Daimler Vans USA. “We talked to customers and some…like a small van concept that fits into a garage, but then complain that it doesn’t hold enough of the things they need to put in there.”

Hence the Metris: “The plumber who’s going to drive the thing home overnight can park it inside, in areas where you’re not allowed to park commercial vehicles overnight,” he said.

Glaser noted that the Metris will fit into any parking garage, yet “it brings 50% more payload than the Ford Transit Connect. We think we really have something here, the right size, the right van at the right price.”

While the Metris is new to North America, it’s already on sale in other parts of the world, as the Vito. The Mercedes reps on hand joked that they wanted a new name for this continent lest they offend the (fictional) Corleone family of “The Godfather” fame; they also admitted that the “Metris” moniker was more descriptive of the van’s target market: customers living and working in “metropolitan” areas.

The Metris is built in Spain and Geisen said the company expects an even split between its two basic configurations of commercial and passenger van. Mercedes figures the passenger version will be used for such tasks as customer shuttles, taxis and limousines while the cargo version will excel for delivery of goods, service/maintenance tasks and other such purposes.

The cargo van comes basically as an empty shell which can be configured in a wide variety of ways to ensure it can handle its owners’ tasks, while the shuttle van configurations can hold up to eight passengers at a time, plus driver.

“It really has the capabilities of a large van, but with a much smaller footprint we think is definitely the right size for this market,” Geisen said.

Other than having gauges that read in the metric system, Canadian versions of the vans will be identical to the US versions, said Christian Bokich, department manager, product and technology communications. “The only difference is of course pricing,” he said, which makes sense given currency fluctuations. That said, in US dollars, the Metris is scheduled to start at $28,950 for the commercial version and $32,500 for the passenger configuration.

At least initially, the Metris will be available with only one engine choice: a four cylinder gas engine adapted for towing and “van use” considerations from the power plant Mercedes-Benz puts into its new C-Class and CLA cars. In the Metris it’s rated at 208 hp and 258 lb.-ft. of torque, and comes mated to a seven-speed automatic transmission with a good manual mode that came in very handy on the many hilly sections of our test drives. No diesel option is on the horizon, the Benz boffins said, because the gas engine, which is tuned to use regular fuel, is better suited for an urban van that makes lots of starts and stops.

The Metris will be available at first only with rear wheel drive, but Glaser said a four wheel drive option could be offered down the road.

“Four wheel drive exists on the platform in Europe, so it’s adapted to the chassis already,” he said, “but it’s not adapted to (this particular) engine configuration. So (whether or not a 4×4 version will make it to North America) hasn’t been decided currently but I think if there’s demand for it we’re going to talk to (HQ in Germany) and see if it makes sense for us.” 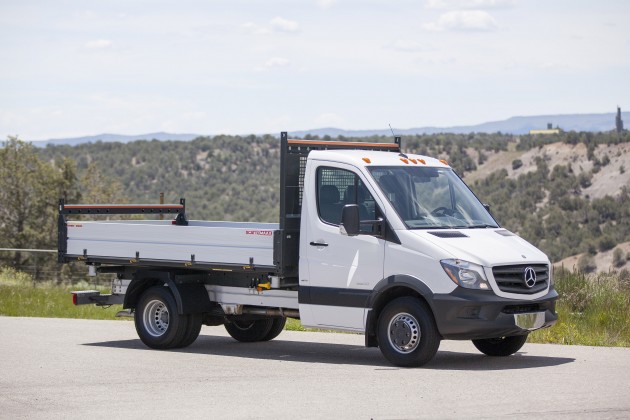 Service intervals are claimed to be 15,000 miles (about 24,000 kilometres) and if you want to save some fuel you can order a Metris with optional ECO start/stop, which off shuts the engine when you’re stopped at red lights. Official fuel economy figures weren’t available in time for the demonstration, but the Benz boys estimated up to 30 mpg from the four-cylinder engine.

“Metrices,” which are about 530 mm shorter than the typical Sprinter, come with typical Mercedes-Benz features including “attention assist,” the Sprinter’s crosswind assistance feature that uses the brakes to help keep the van from becoming airborne when things get blustery, and a load adaptive electronic stability program. Options include a rear view camera and such electronic nannies as lane keeping assist, collision prevention assist, active parking assist and blind spot monitoring.

You can even get “Parktronic,” an automated parallel parking feature that uses the vans’ regular parking assist sensors to actually park the van for you. Mercedes-Benz demonstrated this atop a parking garage in Mountain Village, near Telluride, by having us park a Metris in a space small enough that I wouldn’t have tried it if not urged by our hosts. It isn’t quite as intuitive as Ford’s version, but it works well: activate the system and drive forward until the Metris finds a suitable parking space, at which time it prompts you to stop, shift into reverse, and then take your hands off the steering wheel and keep them off until the procedure is finished. The hardest part is trusting the vehicle to do the job, resisting an almost overwhelming urge to grab the wheel and do it yourself – which of course would defeat the purpose of the exercise. I participated in this demonstration once, and watched a few other guinea pigs try it as well, and it worked every time, not that you’d expect anything different from a company demonstration.

Metris vans will be sold side-by-side with their Sprinter siblings at Mercedes-Benz commercial vans dealers. Pre-orders are being taken as of this month.

The Metris was definitely the hook for the event, but Mercedes-Benz also showcased the capabilities of the Sprinter, whose 4×4 version was featured on Trucknews.com a couple of months ago. One of the new features shown at the Dunton location was the addition of a third, super high roof option that offers an interior roof height of up to seven feet. We also tried a bucket-equipped version and the small dump truck version I drove back to Durango, which features a bed that can be emptied to the rear or to either side. It won’t hold nearly as much as a conventional large dump truck, but for smaller applications such as landscaping companies it could be a perfect solution.

If the production versions of the Metris turn out to be as good as the early samples we tried, Mercedes-Benz may be on to something. Regardless of its sales turn out, though, the company is deadly serious about competing in the commercial van market – so much so that it split off the vans division into a separate unit and is building a $500-million plant in Charleston, S.C. to crank out Sprinters.