SEBRINGVILLE, Ont. – Doug Luckhart has a plan to mix North American requirements with European technology in order to provide cattle and hogs a more comfortable means of transportation.

Luckhart is president of trailer sales group HarBra Holdings Limited and livestock transportation company Luckhart Transport Limited which hauls cattle and hogs across North America, so he has experience on both sides of the livestock trailer sales equation. He has also witnessed first-hand how the industry and the animals have evolved.

“Years ago, when I was young—and my father started the business in 1951—the way we hauled livestock was barbaric. First off, we didn’t know better and we definitely didn’t have the technology. Now we certainly know better,” said Luckhart.

“When I was much younger and picking up [market hogs] myself, they were 200-220 lbs. and they were 4.5 months old. Now, they’re 4.5 months old but 300 lbs. What happens is the bone density is not always dense enough to carry the 300 lbs. I’m not saying they’re fat, but the tissue, the meat part, has grown through genetics. They’re leaner,” he explained, adding that the additional weigh they’re carrying makes it harder for the animals to negotiate ramps, especially those leading onto the top decks of multi-level trailers.

In order to cause less stress on the animals during loading and unloading, Luckhart began adding hydraulic, lifting floors as a custom fabricated option to the trailers he sells and operates. HarBra is a dealer for US-based Barrett Trailers LLC, and Luckhart used Barrett-supplied products as the basis for the modified trailers. Even working with a existing product, however, Luckhart couldn’t keep up with the demand as it took his team six weeks to complete the modifications, and he had a year’s worth of backlogged orders.

“I’d be forever for the rest of my life trying to supply fab’ing them up here,” he said. 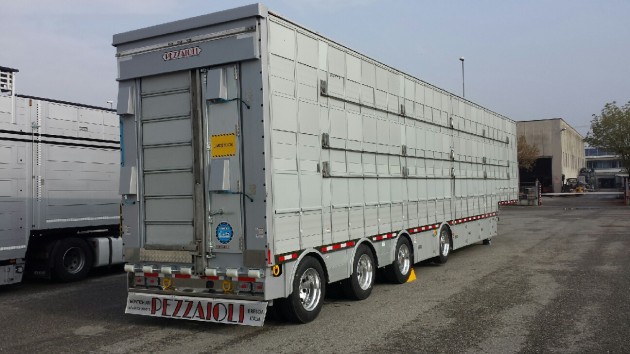 This spring, Luckhart was contacted by the Italian trailer maker Pezzaioli, inquiring about the North American market, and after touring each other’s companies, Luckhart struck a deal to be Pezzaioli ‘s North American distributor. In return, Pezzaioli committed to supplying HarBra with between 100 and 120 trailers over the next two years.

“We know these things are very well built. I can say when they’re better, and they are better than mine. I can recognize that.”

Like the trailers he was modifying, the Italian ones have hydraulic decks, but they offer a number of features Luckhart didn’t offer including a double-skinned, Styrofoam-insulated roof that raises to offer ventilation, double-walled sides, fans, a heated water system with stainless steel tanks, water bowls for cattle, and stainless steel air tanks. And while these trailers are designed and built in Italy, they aren’t too European for the North American market.

“We were able to keep one European piece of technology and still use our suspension. Over there they have anti-roll built into their air suspension, so a trailer doesn’t tend to roll as fast. Over there they have EBS (electric brake system) here it is ABS for the sensors, but we were able to retain this, so they will also have that feature. The trailer tends to regain the proper stance of the trailer quicker going into a curve. “

According to Luckhart, the design of these trailers should make them easier to sanitize.

“No longer do we take deck planks out or have people bending over washing the floor. With these you wash the floor, lift it to the roof, and wash the next floor. Yes, they are much, much quicker to wash and you are able to do a better job of your washing.”

After cleaning his own trailer fleet, Luckhart said they are put into the company’s drying room and heated to 160°F “so if the person washing it misses something, and the disinfectant doesn’t get it, the heat will kill it. We absolutely know we’ve killed everything as long as we’ve taken that trailer up to that temperature. Our drying rooms are run on computers. We have dehumidifiers.”

If Luckhart places a high priority on having clean sanitary containers, it’s because he believes in doing whatever is necessary to keep the livestock healthy.

“Back in 2003, we used to haul a lot of cattle across the border. When mad cow came, there basically was no industry, I don’t want to go through that again, so I’ll do everything I can for the pork and beef industry to help keep them as healthy as they can be because that’s my bread and butter.”

While hydraulic trailers are more expensive than standard units—if a typical trailer sells for roughly $100,000, the equivalent four-axle hydraulic one would retail for around $200,000) he said, it’s an investment that make sense both on the basis of economics and good animal husbandry.

“I know this for a fact because never, ever in the history of the hog farmer or the cattle farmer, have they ever got this much money for an animal, and the only reason they get that money is because the consumer is supporting that price at the supermarket. If the consumer, if your kids, decide it’s important that they know the animals are healthy and have been treated well, and if they’re paying this kind of money are they entitled to that? Definitely. If they’re going to pay for a Cadillac, they want a Cadillac, not anything less.”

Luckhart feels that investing in trailer development and new technologies is going to be a key for the industry moving forward. In particular he thinks the self-sustaining trailer—one that can keep animals fed and watered during long trips—is something that needs to happen, both for the animals’ well-being and to keep livestock transportation businesses running.

“We have Canadian Food Inspection Agency (CFIA) rules about how much time we have to get the animals from one place to another, so in the future, everybody says you’ll have to run teams. All livestock truckers are scrambling for drivers, so if you can’t find enough drivers to fill the trucks, I don’t know where you’ll find twice that amount in this market.

“In the long term, I think what you’ll end up finding is self-sustaining trailers and what that will be that you load up a load of cattle in Calgary or Winnipeg, they need to be on feed and water all the time, even if a snowstorm closes the road. I still have to figure out how to keep that water thawed at -40°C, but we’re just interested in baby steps. I see that will be the future.” 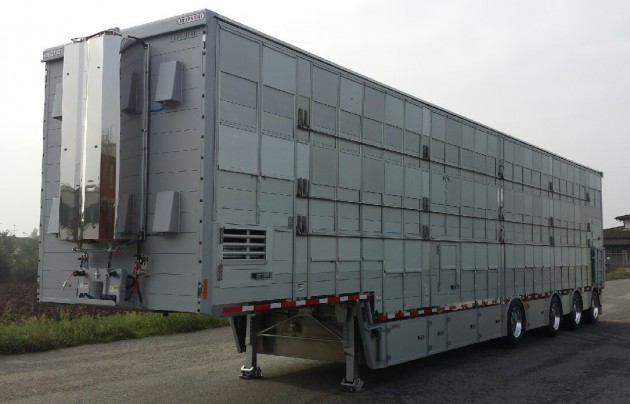 Although there will be a cost to it, Luckhart said being able to keep an animal on food and water is a price worth paying.

“If you kept these animals on feed and water coming out of the West, their shrink would be at least 2% less. We’ve handled loads where calves are costing $3.40 per pound. You take a 500 lb. calf, that’s $1,700 and 2% on that is $34. We have 100 calves on, so that’s $3,400 more we can put towards the freight and the farmer is not out a penny. Everybody gets alarmed at the initial numbers, but you have to work it back and the smart operators will work it back.”

In order to make it easier for customers to come to terms with the costs of the more expensive European trailers (thanks to the exchange rate on the Euro), Luckhart is offering special pricing on early orders.

“We’re going to sell these Italian trailers for basically the same money [as the American-based ones] and they have all these other options: hydraulic roofs that lift, fans, heated water systems—those are all extras we are going to throw in for nothing to get this thing going.”

He will also offer any fleet that is interested in purchasing a Pezzaioli trailer a week to try one out. If the trial results in a sale, there won’t be any cost. If not, he will charge $1,000 for the week’s rental.

Luckhart promises that he will always have one or two trailers in his showroom, and he will also have a fleet of them on the road. The company took delivery of its first one—a unit that can carry three decks of hogs or two decks of cattle—in November. His second unit, which has already been ordered, can handle the same configuration, but also adds the ability to haul four decks of feeder pigs.

“That’s why I’m lucky over the other dealers. When nobody is interested in looking at one of these, they’re running up and down the road earning their keep.”

To show off his new trailers, HarBra is holding two open houses at the company’s headquarters in Sebringville in January. They will take place on Saturday, January 10, 2015  and Saturday, January 17, 2015 betweeen 11:00 AM and 5:00 PM. Luckhart said attendees can expect to be served some beef and pork during both events.