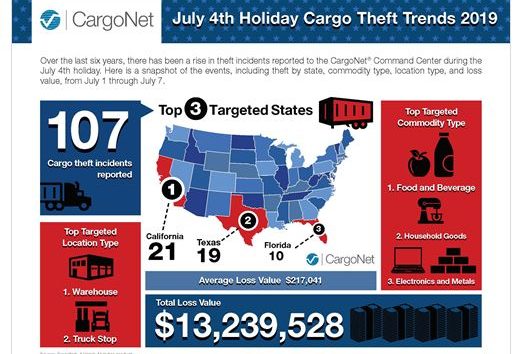 JERSEY CITY, N.J. – As Canada and the United States prepare to celebrate their national days, a major freight tracking and recovery company is warning about a potential surge in cargo theft.

CargoNet said its analysis of U.S. and Canadian cargo theft data from July 1 to July 7 for the past six years had revealed that food and beverages, electronics and major appliances were some of the most stolen items.

There were 25 states or provinces in total that experienced some cargo theft worth more than US$13 million during the reporting period, the company said.

“In the analysis period, 107 cargo theft events in the United States and Canada were reported,” it said, adding that cargo was most commonly stolen on Fridays.

“And they should park in high-security locations with security services, secure fences and high-visibility lighting,” it said.

The company also called on freight brokers to be extra vigilant during the holiday season as fictitious pickups increase.

“A trucker that is willing to take an undesirable load for a lower rate than the industry standard may be setting you up for a theft,” CargoNet warned.