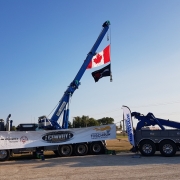 WINNIPEG, MB — The 10th Annual World’s Largest Convoy for Special Olympics came to Winnipeg, Manitoba, on September 9 — attracting 188 truckers to support the cause. Together they raised more than $72,000 this year, bringing the total raised in the last decade to about half a million dollars.

The money raised is used for the sports programs and travel for the 1,700 Special Olympic athletes in Manitoba.

I was treated to huge smiles, squeals of laughter, and virtually non-stop chatter as we waved, honked, and flashed our lights for the entire 85-kilometer ride. People lined the service roads and waited for us to pass by. After the nearly two hour trek, we returned to a local community center for some pizza, awards, and laughs provided by the MC Brody Jackson of QX104.

Spend time with these athletes and you’ll notice how much they love the convoy, their sport, and being able to compete.

Jennifer Campbell, the president and Chief Executive Officer of Special Olympics – Manitoba, was hooked by the cause shortly after graduating school. She says the athletes love to be involved. They compete for the true love of sport. If one stumbles, another is there to help across the finish line.

With the pizza done, laughter a pleasant memory, and cleanup done, we all headed back to our trucks — hearts lighter, content that we had done a small part in helping people in need.