LINCOLN, NE – Duane Acklie, the chairman of Crete Carrier, died this weekend in Lincoln, Nebraska. He was 84.

Crete expanded to become one of the largest privately owned fleets in the U.S., and now has 5,000 power units and more than 13,000 trailers. 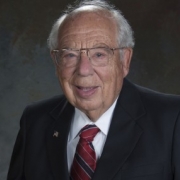 The company was founded in 1966, leasing six trailers to haul dog food. Acklie, an attorney at the time, helped incorporate the business and represented founder Ken Norton during an attempted sale in 1971. When that deal failed, Acklie and his wife, Phyl, decided to buy the business.

He was Chief Executive Officer of Crete Carrier until 1991. And it was not his only role in trucking. Acklie also served on the boards of Central Freight Lines, Hunt Transportation, the American Transportation Research Institute, and the American Trucking Associations.

The prominent supporter of the Republican Party was also an advisor to presidents George W. Bush and George H.W. Bush.