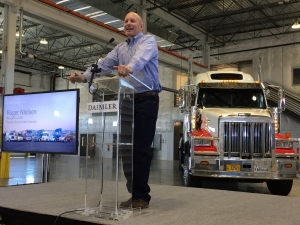 “We’re a global company, and globally we believe in free trade. And we’re prepared to engage everybody and anybody in discussions,” he said during his first media briefing. “I don’t anticipate any major changes in the NAFTA.”

The company has reserve manufacturing capacity in the U.S. and Mexico, he noted. The supply chain is also dual-sourced. “They have the ability to source worldwide or source domestically.”

Daimler’s global presence was recently punctuated when Nielsen’s predecessor, Martin Daum, was promoted to lead Daimler Trucks and Buses worldwide. Then Nielsen received the call that put him in his current role.

“I was absolutely in shock,” he says. “I never really thought that would be the next step in my life.” But he earned the role, and there have been several executive promotions at the company since, many of which were set up by Daum.

Nielsen himself served as the company’s Chief Operating Officer since 2001. And he clearly likes to keep in close touch with staff and products alike. He often grabs a truck on display in front of the company’s corporate headquarters to head out for lunch. And he makes random calls to the call center to see if the answers align with corporate approaches.

Aspects of his previous role will undeniably influence the work he does today. “I bring in a view of being responsible for product quality,” he says. “Quality in the factory is service quality.”

But the role of president and Chief Executive Officer is undeniably different. “I now understand my opinion counts,” he says, illustrating the comment by referring to a Tweet he questioned. He just made a passing reference to it, but the next time he went back to read it, it was already gone.

Daimler clearly has set its sights on a 40% market share, and it is a leader in on-highway truck sales. But the potential for a bigger market overall is dampened somewhat because major buyers have “fresh fleets”, with average equipment ages under 24 months.

“Used truck pricing is not like it was two years ago, three years ago, four years ago,” he adds. Those who have equipment with plenty of miles left are more likely to stick with what they have.

Some customers are also holding back purchases as they wait for different configurations of the next-generation Cascadia. That rollout is scheduled to be complete in mid-2018.

“We have some great products yet in our pipeline,” he adds, alluding specifically to vocational models that are in the works. “We have engineers who love to design trucks.” Look at the piles of dirt, he said, pointing to the surrounding High Desert Proving Grounds. It needs to be moved.

Fuel economy also remains a central focus. “For sure, we are promising better fuel economy year over year,” he says, adding that he’s confident the second phase of Greenhouse Gas emissions standards will remain in place. The tools to meet the cleaner emissions are all technologically viable and doable.

Consider the difference realized by Automated Manual Transmissions. About 95% of all new Cascadias come with those. There was a time not long ago when many people thought of that as a niche technology, Nielsen observes.

As for Tesla’s plans to introduce and electric Class 8 truck by September? “It’s interesting to watch,” he says, referring to gains in battery power density as well as the cost per kilowatt hour. But there is still the challenge of long-haul drivers who don’t want to stop for frequent charges. “Daimler is the leader in electric vehicles. We’re the leader in battery technology,” he says. “We will be ready when the market is ready, if it ever comes.”