A trucking company deploying a telematics solution it not at all unusual—in fact, it’s pretty commonplace. So normally word that Canada Cartage has a new telematics system would barely qualify as news. But the century-old, Mississauga, Ont.-based company has taken an approach that most companies would never consider: it built its own system from scratch.

Going with a completely custom solution was an easy decision for the company, especially as it was viewed as a business decision rather than a computer technology project.

“The reason we wanted to do this is so we could differentiate ourselves from the standard, off-the-shelf package that anybody could buy. We didn’t want to go with a me-too solution. We wanted a competitive advantage,” said Daniel Roy, Canada Cartage’s vice-president of information technology.

“We needed a company-wide approach that was flexible enough that we could customize it based on our needs and our customers—so we could service our fleet and provide the best possible service to our customers in meeting their exact requirements. That’s what led us down this path,” said Roy.

Specifically, the path is one that connects the company’s Accellos enterprise resource planning (ERP) system, and its Microsoft SQLServer databases, with the trucks themselves. Having a fully connected system is not just beneficial for Canada Cartage, but also for its customers, explained David Zavitz, senior vice-president of sales and marketing.

“The fact we linked the telematics solution into our ERP system is not standard. That is one of our big differentiators. Within our ERP system, we have a wealth of customer data and now with the telematics—the fact it integrates with the ERP—means we have a real 360 degree view of what is going on with the customers, the equipment and the fuel.”

“From a general standpoint, a basic requirement or basic desires from most of our customers, is visibility of assets we have rolling for them,” added Jim Sistanis, vice-president of Ontario operations. “Some customers are looking for delivery notice applications that happen electronically. The other [requested] components are usually our ability to reduce our carbon footprint and show them what our emissions are at any given time, or our fuel efficiencies, that sort of thing.”

According to Roy, having a better understanding of where the trucks are and where the customers need them to be makes it easier to manage the fleet.

“Because of the fact we are able to feed into the ERP system, we can also build the patterns of the trips 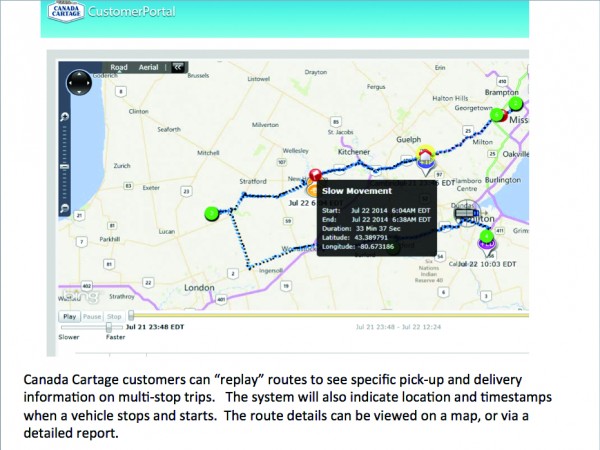 we are running and optimize those for better efficiency. To Jim [Sistanis]’s point on the ability to reduce the carbon footprint, we are trying to reduce it the best we can and to optimize the fleet,” said Roy.

Along with managing its physical assets, the telematics system also allows Canada Cartage to know what its drivers are doing. Sistanis, repeating what every trucking company executive knows, explained that if the company wants to improve its fuel economy numbers, the best way to do that is to change the way drivers behave behind the wheel.

“We can review specific equipment, specific drivers, any odd behaviour. The system is set up to trigger alarms after certain intervals, depending on whether the driver is idling for a significant amount of time or whatnot. We’re made aware of those things very quickly and we can address them very quickly as well.”

The challenge with many IT projects is getting disparate systems to communicate with each other, and to generate data that is usable across multiple platforms and applications. Canada Cartage faced exactly those same issues, and it tackled them in the same way it did the overall project: it developed a custom solution. In fact, Roy said the company went as far as designing and constructing its own cables to extract information out of the trucks’ on-board computers, all while being unobtrusive and not interfering with any of the driver’s actions in the cockpit.

“With the overall J-bus standards, there is a ton of information you can pull out, but you want to pull out is what is relevant to you. That’s where the decision to go with our own cabling solutions came in. The hardest part was figuring out what came from the different manufacturers via the J-bus. Once we got that figured out, marrying it was just typically an RS-232 type of configuration. At that point, all it is, is deciphering which wire will do what and map it accordingly, so that’s what we did. Overall, the initial R&D component certainly required an investment, but it will pay dividends in the long-term.”

Roy added that having a standardized approach to data capture was critical. “That was the one key requirement that business asked us to provide. Jim [Sistanis,] was very strict on that from an operations perspective: we don’t want to see that if it’s an International for instance, data that looks like this, and if it’s a Freightliner, see data that looks like that. Everything has to be consistent when presented back to the ERP. There has to be consistency. We had to make sure what we were delivering was consistent across the board.”

By controlling the data it imports, Canada Cartage has to do very little cleansing or manipulation before being able to use the information. It is also able to limit the amount sent from each truck to less than 5MB per month.
“We have a set up a separate environment in our server farms that collects the [GPS and telematics] data and from there we parse the data. Based on what we capture, it is sent to various database we have set up.

The hardware that is attached to the custom cables and that transmits the data from the trucks back to the office over satellite and cellular networks is also unique to Canada Cartage. It’s a hybrid of specially designed and engineered technology and off-the-shelf components from its IT partner.

Although Canada Cartage undertook roughly half of the of the project development itself, the company did have support from Lyndhurst, New Jersey-based Wireless Links Inc. Roy describes the fleet management integrator and service provider as being willing to help the trucking company create the access and customizations it needed—even to the point of having the CEO directly involved in some of the development work.

During the system design phase, steps were taken to ensure data security. While he won’t go into details about how the system was hardened, Roy said, “data security is an absolute integral part of our being here. We had to build an environment to make specifically sure of that. We had to take that into consideration. It was a big part of the project.”
Because the solution is so new, Canada Cartage is still deploying it across the entire fleet. Since the end of 2013, when the project finished beta-testing, approximately 700 units have been installed in the company’s trucks, and clients have gradually been introduced to the solution. So far, Sistanis said their reactions have been positive. 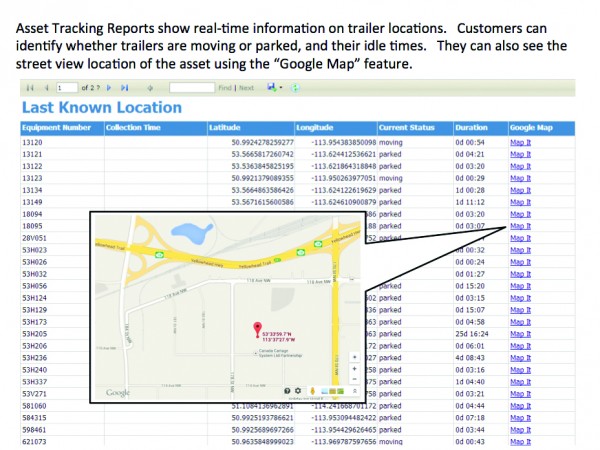 “Customers have the ability to log in through our portal and have visibility of the units that are working for them on a given day—their whereabouts, the speed they are travelling and things like delivery notification and estimated time of arrival.”

It’s not just the existing customers who are benefiting. Sistanis said the new system makes it easier to bring new customers on board quicker and easier—usually within a week.

“Even going back to the initial question: why did we decided to develop our own as opposed to buying something off the shelf, the interesting part of our business is the significant number of customers we service with different applications they have and utilize. Part of our struggle over the years has been in a lot of cases the customer has dictated what they want us to utilize to communicate information back to them. This [telematics solution] gives us the ability to have an in-house system that will satisfy a lot of the requirements our customers have with their own systems so we don’t have to tie Dan [Roy]’s group up trying to integrate a bunch of different off-the-shelf systems into our ERP system to make things work so we can communicate with them. We can adapt them to our system a lot easier than we did in the past.”

Overall, Sistanis says the new technology has made the company more efficient and proactive.

“Being able to see all the information come to fruition is fantastic—to see how quickly we can identify an operating issue and be able to jump in and resolve something that shouldn’t be happening.