MONTREAL, Que. — By the end of this March, trucks operating for the Quebec-based transportation company Groupe Morneau will begin pouring in and out of its new, 82-door LTL terminal, just 5.5 kilometres from its old dry goods terminal in Saint-Léonard, on the Island of Montreal.

There is room on the 525,000 square-foot property to park 80 tractors and 220 trailers. It is set up to handle long combination vehicles and, when the day comes, it will be able to accommodate 60-foot trailers. This $25-million project brings the number of terminals in the Groupe Morneau network to 21. 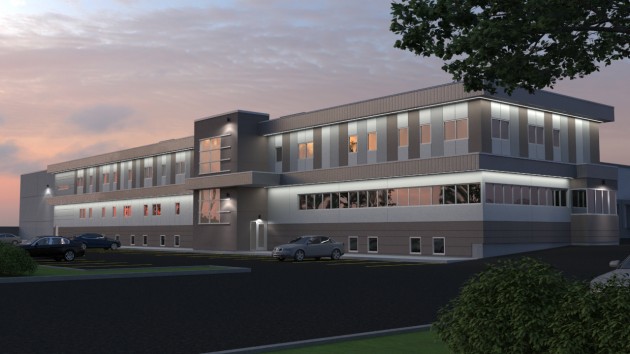 Groupe Morneau’s entire technology, sales, marketing and operations staff will move lock, stock and barrel into the new terminal from its current digs in a 50-year old, 54-door building in Saint-Léonard. The refrigerated division, Groupe Eskimo, will remain in the adjacent temperature controlled, 24-door terminal.

The company headquarters, its financial centre and administration building, is located in Saint-Arsène, eight kilometres east of Riviere du Loup.

“We can now establish our expertise on an even more solid foundation by offering our clients the most important LTL transport terminal in Quebec,” says company president André Morneau, the third-generation Morneau to run the company, which was founded in 1942. The company bills the terminal as one of the largest in the province.

The cross-dock design is in the shape of a 120-foot wide rectangle, with 41 doors on either side. “We calculate that 120 feet wide is the most efficient for us. It maximizes lift truck operations,” André Morneau says.

“With this operation it will be so fast, and respond to consumer need for deliveries,” adds David Morneau, business development manager and one of the fourth-generation family members working for the company. “Everyone wants to be picked up in the late afternoon and delivered to in the morning.”

Its location near the junction of the A-40 and A-25 gives trucks arriving from all points of the compass easy Autoroute access inbound, and for fanning out to make local deliveries or trips to Groupe Morneau’s other terminals. With triple the amount of cross-dock space of the old terminal, it will be much easier to strip trucks at night and prepare LTL loads for next-day delivery across the province and beyond.

The Morneau fleet consists of 400 tractors and 900 trailers. Across its network the trucks handle 2200 deliveries a day, of which 800-1,000 are in the Montreal area. The company has approximately 1,200 employees. About 220 employees will be working in the new terminal. André Morneau expects this number will grow to around 350 within five years.

During the cook’s tour at the grand opening, André highlighted some of the terminal’s features. For example, a red light, green light system on every door reduces the likelihood of forklifts driving off the dock: Truck drivers are not allowed to drive ahead until the light is green. The light only turns green when the overhead door is closed and latched.

Beefy yellow-painted steel bumpers between each door prevent misaligned pallets or other cargo from damaging the overhead door guide rails and other hardware.

There is a thee-bay repair shop, with heated floors for the comfort of the mechanics. There will be four mechanics on the day shift and four on the night shift. Next to the shop is a wash bay for rigs.

We see a 16-seat training room and the IT and communications areas. Empty offices stand ready to receive their new 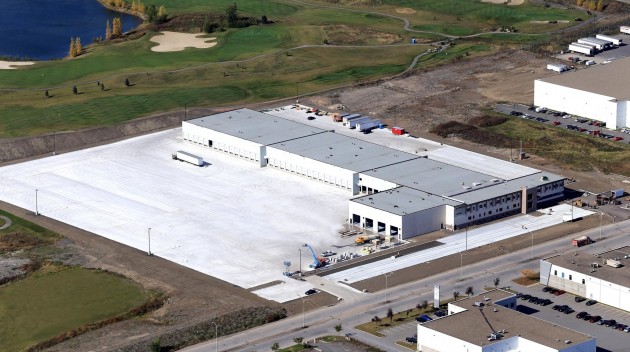 occupants and furniture. The billing and operations area has a view of one side of the yard. In the entry by the gate where drivers do their business, there will be monitors displaying video feeds from cameras posted at the gates of every terminal in the Groupe Morneau network.

In the bowls of the building is a giant computer brain, a data centre infrastructure by Emerson Network Power called SmartRow. A set of cabinets, roughly eight feet high and 16 feet long, with built in refrigeration and fire suppression system, houses 18 terabytes worth of computer capacity.

There are only three such machines in Quebec, one of which is owned by Hydro Quebec. SmartRow centralises every byte of information in the 21 Morneau terminals. It handles the phone traffic, billing … everything.

SmartRow drives home not only the massive complexity of running an operation as large that of Groupe Morneau, but the bringing of much of the company’s activities under one new roof. It will serve four Morneau divisions: Morneau Transport, Morneau Solution, Morneau Sego and Morneau Global.