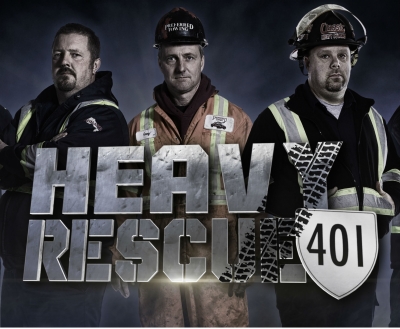 TORONTO, ON — Highway Thru Hell offered many television viewers their first glimpse of heavy rescue operations, and now the producers are focusing cameras on one of the most hellish routes Canada has to offer — Ontario’s 400 Series highways.

Heavy Rescue: 401 debuts on the Discovery Channel this January 3, showcasing the efforts needed to keep traffic moving between Sarnia, Toronto and Barrie.

Just don’t call it a reality show. “I fundamentally disagree with anyone who describes this as a reality show,” executive producer Mark Miller told Today’s Trucking, stressing there is no control over the weather and that crashes are not staged.

“We know there are people out there who aren’t fans… who think we make the [trucking] industry look bad,” Miller adds. “I think we humanized it.” Highway Thru Hell, now in its sixth season, portrays heavy rescue crews on British Columbia’s Coquihalla Highway as true emergency responders. Fans even share photos of their kids who dressed up for Halloween as tow operators. If the show has a villain, he believes it’s the bad weather that contributes to wrecks.

No matter how the show is viewed, there is no question that it has viewers. Highway Thru Hell ranks among Discovery’s Top 5 programs, and has made TV stars of people like Jamie Davis, who runs a towing operation in Hope, British Columbia. The most recent episode recorded more than a million viewers in a single week. That’s a massive audience for a specialty channel.

Heavy Rescue: 401 takes a slightly different approach to Highway Thru Hell and will focus on a broad array of teams including Ontario Provincial Police, Ontario Ministry of Transportation enforcement personnel, York Regional Police, road maintenance teams, the Compass Center, and other groups as they focus on keeping highways open for business. “You realize the stakes are huge,” Miller says. “We had no lack of content.”

Promotional teams have clearly focused on the underlying drama, with a press release proclaiming: “From monster snow storms creating kilometers of mayhem to trucks spilling their loads, these efforts safeguard the country’s most important trade route with the U.S. from grinding to a crippling halt through the worst of the winter driving season.”

Programs like these continue to draw viewers because of a common theme of self-reliance, Miller says. After all, there is no manual describing exactly how to recover a wreck that slid 400 feet down an embankment. The debut episode of Highway Thru Hell is still his favorite in that series because it sets up the world, and explains challenges which come with a highway where it can be raining at one end and snowing on the other. Lives are on the line.

“I think we always try to portray the trucking industry as professional,” Miller says. “We want drivers who are cutting trucks off to see what happens when a Honda Civic cuts in front of a Kenworth.

“If we can educate people and get them to understand what they’re doing, maybe they won’t do it as much.”