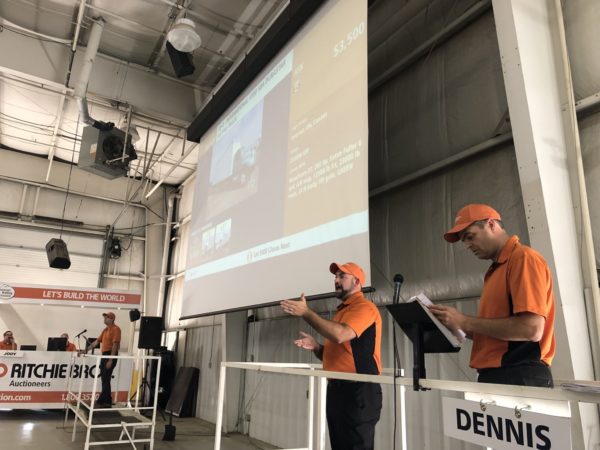 BOLTON, Ont. – The world’s largest industrial auctioneer kicked off a two-day sale in the Toronto suburb of Bolton on Tuesday, with more than 4,000 pieces of equipment ready to go under the hammer.

Among the items set to be sold at the Ritchie Bros. Auctioneers event were hundreds of heavy-duty trucks, a large selection of construction and farm equipment, a wide variety of support tools and even a classic car – a 1965 Ford Thunderbird convertible.

“If it is used to dig, build or transport, you can buy it or sell it at a Ritchie Bros. auction,” says a promo.

The company sells them on behalf of their owners.

The items are sold in an unreserved auction. That means there is no set minimum price, a business model Ritchie Bros. adopted when the company was founded in Kelowna, B.C., in 1958.

Anna Sgro, senior vice-president for Canada East sales at Ritchie Bros., called it a “complete transparent model” that has contributed to the company’s success.

She said the auctions typically attract customers from around the world.

Buyers get a chance to inspect and compare the items days before the event takes place, and on auction day, equipment such as trucks are driven over a ramp in front of the bidders.

Then, within minutes, they are gone in a bidding war.

In May, Ritchie Bros. set a Toronto record when it sold equipment worth $46 million.

Sgro said she was hopeful this week’s sale would beat that record.

“It is the most lots we’ve ever had at this site,” said longtime Ritchie Bros. employee Derrick McWaters.

The Bolton auction comes just weeks after a highly successful event in Edmonton, Alta., where a record 10,700 items were sold at the company’s first-ever five-day sale, fetching more than $100 million.

Ritchie Bros. has 40 permanent auction sites worldwide, and also runs an online platform, where tens of thousands of items are listed at any given time.

In 2018, the company sold items worth US$4.9 billion in gross transactional value.

Bolton is about 50 kilometers northwest of Toronto.