International Trucks has unveiled the new RH Series Class 8 truck for regional haulers, in a model that will be powered by the recently unveiled A26 12.4-liter engine.

The 113-inch BBC truck made its world debut at the ExpoCam trade show in Montreal. 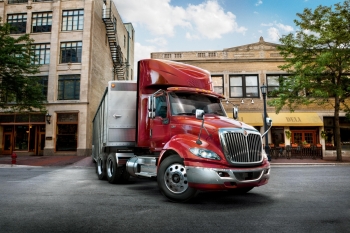 “We are confident this truck will continue to build on our momentum and be successful in the regional haul market,” said Bill Kozek, Navistar president – truck and parts.

Many features in the truck reflect the company’s mantra of improving uptime. Cab wiring, for example, includes all-new harnesses and a power distribution module tucked inside the cab, away from the elements. A new single-canister aftertreatment system is 60% smaller and 40% lighter than its predecessor and also been simplified for quicker service, the company says.

The view from the cab itself has been enhanced with redesigned side windows and mirrors, all drawing from an in-depth study of the points where drivers and trucks interact. Visibility is further improved with a swept-back windshield and sloped hood.

With a 50-degree wheel cut, the RH Series has a turning radius of 27 feet, 10 inches, which is particularly important in urban environments, the company says.

Hundreds of drivers offered thoughts on the interior during a series of driver clinics. Among the changes that emerged was a premium gauge cluster with digital driver display, real-time data on fuel economy, and other alerts. The new display also offers up to 15 customizable digital gauges, International adds.

And forget pressing the middle of the steering wheel to sound the horn. The lanyard sits over the driver door.

“We drew upon the expertise of drivers to ensure that the RH Series is the most driver-centric Class 8 regional haul vehicle we’ve ever built,” said Denny Mooney, senior vice president, global product development. “Many of our customers tell us that their number-one challenge is attracting and retaining drivers, which is why we put so much effort into understanding and responding to drivers’ needs. These improvements also contribute to increased driver ease of use that will boost the vehicle’s productivity.”

Weight has been saved using the single-canister aftertreatment system, International Ride Optimized Suspension, aluminum fuel tank hangers, and the A26 engine itself.

– A typographical error has been addressed to reflect the turning radius of the truck. Today’s Trucking regrets the error.