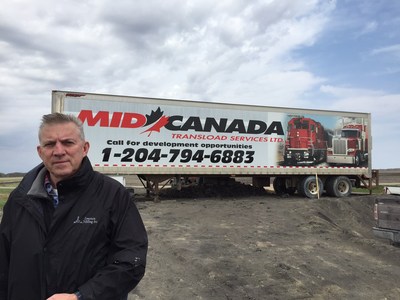 Once developed, the 250-acre site will be one of the largest privately owned inland ports in the province, the company says in a related release. It will be located alongside Highway 75 and have access to CN and BNSF railways. Daily rail service will take freight to and from the U.S. and Mexico.

Real Tetrault, the Chief Executive Officer and president of Emerson Milling, came up with the idea of a transloading site. His oat milling plant in Emerson, Manitoba loads CN rail cars that are interchanged with the BNSF railway. That led to the concept of an industrial part for transloading other products that move by rail but still need trucks to move products to and from the rails.

“Any product that travels more than 10 hours by truck is more cost effective freight when shipped by rail,” Tetrault said. “We are offering a service to and from our rail site and we will transload the customers’ product in a safe and efficient environment.  We are also willing to build on this site as our customer may require.”

“This development is strategically positioned with direct links to international markets,” says Cliff Cullen, the province’s growth, enterprise and trade minister. “Manitoba producers, processors and small and mid-size shippers will benefit from the opportunities this new inland port will provide.”