RAPHINE, Va. – Like something out of a sci-fi movie, the AirFlow Starship initiative has produced a futuristic-looking rig that’s been in the making for several years.

Beginning with a simple drawing by former driver and owner of AirFlow Truck Company Robert Sliwa, the Starship, which is a joint venture between AirFlow and Shell Rotella, has been tearing up the road for a while now, and I recently had the chance to ride in the fuel-efficient truck during the Shell Rotella SuperRig Roadshow at White’s Travel Center in Virginia.

“If you put the wrong driver in this truck, they won’t get as good of fuel mileage,” Sliwa said during our ride along June 14. 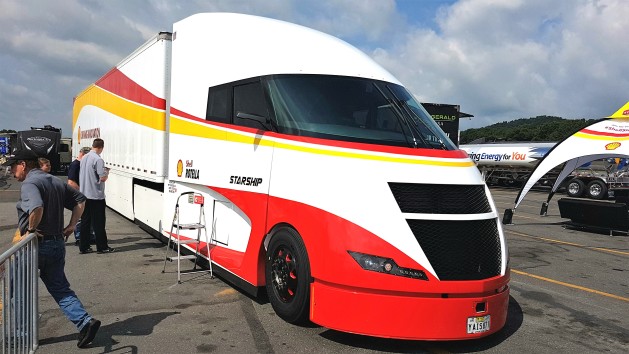 This past May, the Starship made a cross-country trip from San Diego, Calif., to Jacksonville, Fla., in an effort to showcase what the truck is capable of, which Sliwa said is comparable to any big rig out there.

The truck was fully loaded during the trip, with a total gross vehicle weight of 80,000 lbs., while the Starship’s freight ton efficiency was measured by an on-board telematics system.

Riding in the Starship is like riding in many other tractor-trailer combinations. With an automated manual transmission, shifting gears was smooth and efficient, even while accelerating up to speed to enter the highway.

The air conditioning cooling the cab was powered by the 5,000 watt solar panel configuration on the roof, charging a 48 volt battery bank on the tractor.

Sliwa said he started building trucks back in 1983, a time when anything out of the ordinary in the trucking industry was not as accepted as it is today.

He said his first truck seemed to get about 95% negative reactions from those who saw it.

The next truck, the BulletTruck, which he started in 2009 and completed in 2012, was more accepted by the industry, but still there were reservations by many.

“We took that truck from coast to coast and everywhere else hauling real freight. Some guys really hated it and some guys really loved it,” Sliwa said, adding that there was about a 50/50 split between the two sides.

Sliwa said now with the Starship, some people still ask whether the truck is an electric vehicle or some other alternative fuel offering, even when he’s at a truck stop pumping diesel to power the truck’s Cummins X15 engine.

Sliwa said historically trucking is a very conservative industry and takes baby steps when it comes to change, and over the past five years progression has been glacial. He said several OEMs know that the Starship’s design is what is needed to help save fuel and put out a more efficient truck, but fear of the unknown and potential challenges selling a product like the Starship steers them away from the design.

Rolling down the highway at around 60 mph, I asked Sliwa how the truck performs in adverse weather conditions as seen in Canada and the northern states.

Having driven through a snow storm in Nebraska, Sliwa said the experience was no different than if he were driving any other truck, and took the same precautions as the other drivers had.

He also drove in 75-mph cross winds north of Salt Lake City, Utah, and unlike some assumptions, the truck was sturdy.

“A lot of people contend that the truck will be less stable or tend to blow over with full trailer skirts, but it’s really the reverse,” he said. “If you didn’t have skirts and the wind was blowing 75 mph, it’s only going to hit the top of the trailer and blow it over. When you have the full skirts, it pushed it sideways.”

He also said the skirts eliminate splash and spray, an advantage for both the truck driver and others on the road around them.

The Starship does not have any traditional mirrors, which Sliwa said can get dirty in adverse weather. The driver instead relies on a mirror eye system, using cameras around the truck, which have their own boat tails to help reduce any debris from inhibiting the view.

The cab was extremely roomy, with the bed having been removed and replaced with seats for the ride along. 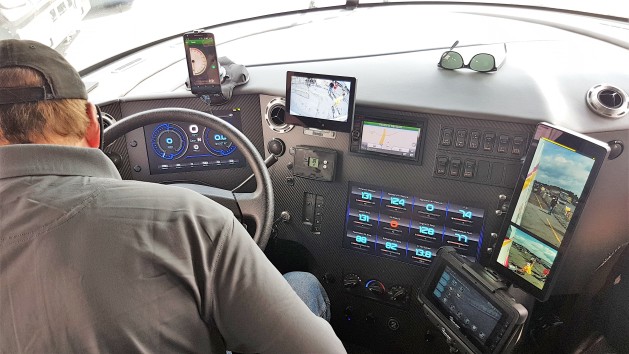 No testing has been done on the Starship yet, even after its journey from California to Florida. Sliwa said testing will come, but that is the second phase of the Starship initiative.

All in all, other than the look of the truck, it rode much the same as several other trucks I’ve been in. I did not get the chance to drive the Starship, which of course means I am missing out on what driving the truck would really be like when it comes to power, torque, and maneuverability.

But as Sliwa pointed out, trucks like the Starship represent the future, and if the industry is going to embrace a more fuel efficient vehicle, it just might catch on soon.