No small bump in the road

August 26, 2014
Why a Mississauga entrepreneur wants the province to reconsider its construction plans for Hwy. 401 over the Credit River

MISSISSAUGA, Ont. — To some, it may just be another bump in the road. But to one Mississauga businessman, the Credit River ‘dip’ on Hwy. 401 is a costly mistake that will become even more costly once the province widens the highway there in the coming years.

Current plans are to expand Hwy. 401 to 12 lanes across the Credit River floodplain following the current contour of the road, which dips as much as 70 feet, causing traffic congestion and increasing emissions.

The Ministry of Transportation’s policy is to follow the lay of the land when a grade of 3% or less is present, however Ernie Lynch, president of Lynch Group of Companies, is pushing hard to have the province reconsider. The Lynch Group, based on Argentia Road in Mississauga, Ont., manufactures hydraulic controls and systems for customers around the world, the largest being NASA. Its president and founder is frustrated by what he considers the needless waste of fuel, consumed mostly by trucks as they gear down to climb out of the dip and get stuck in the stop-and-go traffic bottleneck that exists there. 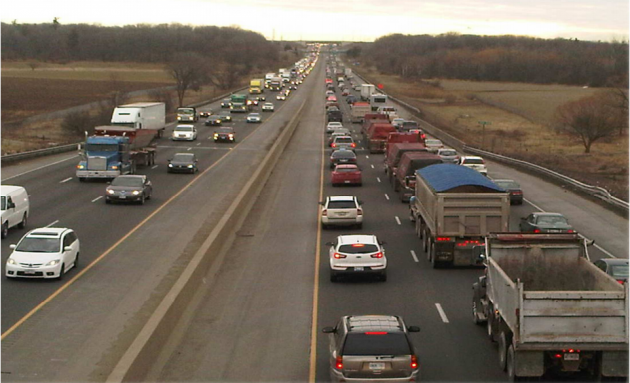 A view from the Creditview crossing over the 401. A Mississauga businessman would like to see the stretch leveled off before it’s widened.

It’s this environmental impact that has prompted Lynch to push for a change to the design plans. Lynch is a bona-fide environmentalist whose company does more than pay lip service to its environmental philosophies. Lynch’s own home is largely solar-powered, and generates surplus electricity that he sells to the city. He is planning to install solar panels at the company’s Mississauga manufacturing plant and will offer charging stations for employees who drive electric-powered vehicles.

Lynch Group funded the conversion of one employee’s Toyota Prius to a full plug-in vehicle that now gets 180 mpg. It organically grows vegetables on-site and is seeking permission to build a greenhouse there. Sometimes, Lynch prepares lunch for employees using these same homegrown organic vegetables. And he even pays employees to move closer to the office to decrease their commuting time.

“We will continue to provide subsidies to employees for buying hybrid and electric vehicles and will supply them with charging systems and so on,” Lynch told Truck News in a recent interview at Lynch Group headquarters. “We also have a subsidy if someone moves closer to the company and cuts their commute – say, from an hour to 20 minutes or five minutes – we’re going to help them out financially because it’s less strain on the environment.”

Frustrated at regularly seeing the bottleneck effect caused by the Credit River dip, Lynch has made it a personal mission to change how the road is expanded. He would like to see a 2.5-km viaduct constructed, which would level off the road surface, similar to what exists further east where the 401 crosses over Yonge St. 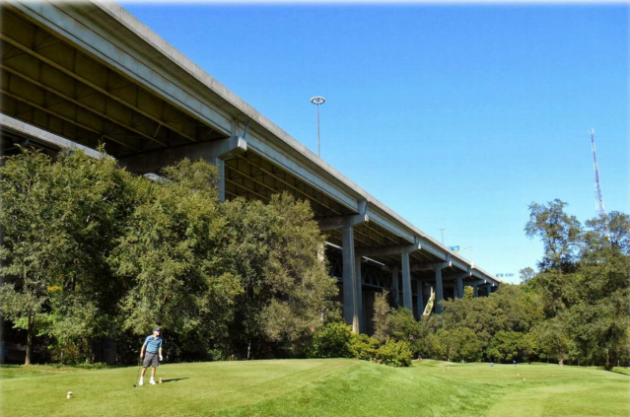 A viaduct similar to this one at Hwy. 401 and Yonge St. would allow traffic to flow more smoothly over the Credit River, reducing emissions, Ernie Lynch contends.

“We do a certain amount of social corporate responsibility inside the company, but this is an effort I saw that needed some attention on the outside,” he said. “It’s a personal endeavour.”

Lynch has invited MTO engineers into his office to hear his ideas, but says his suggestions were dismissed, due to MTO’s roadbuilding policies, which involve following the existing roadway where a grade of 3% or less exists. (This stretch is right around the 3% threshold, Lynch estimated). Undeterred, he took his message to the Peel Goods Movement Task Force, which was more receptive to the concept and later indicated it would pursue the issue with the MTO when it meets with them in October.

But Lynch would like to see the trucking industry, arguably the greatest stakeholders in the future of the road design, get on-board as well.

“I’d like to get the trucking industry in general interested in this, because they’re the hardest hit,” Lynch said.

He is reaching out to local shippers and trucking companies in hopes of garnering their support. With construction set to get underway next year, Lynch realizes there’s not much time to effect change, but he’s still optimistic.

“If enough people speak up and there’s a fuss raised over this, anything can be changed,” Lynch contended. “They’ve changed the subway plan in Toronto I don’t know how many times, and it has always been a ‘done deal.’ But it’s not done until the shovels are in the ground.”

However, one professional driver who regularly travels this section of Hwy. 401, told Truck News alleviating congestion there may not be as simple as leveling the roadway.

“I spend plenty of time in this area so I know the grade,” said professional driver Angelo Diplacido. “I have had to gear down for that hill coming up on Mavis Rd., but the loss of speed is not so much because of the grade itself as it is that from Mississauga Rd. to Mavis, we are entering a zone of activity. Mavis Rd. is a popular exit for commuters, so there’s also a jockeying for pole position going on. The trucks get on at the business junction (at Mississauga Rd.) and some trucks grab the centre lane immediately in an effort to avoid the exiting traffic at Mavis Rd. Some commuters take the left lane at Mississauga Rd. to get around the trucks that just got on, only to jockey themselves back to the right for Mavis Rd. It’s the old game of ‘Beat the Truck’ to the exit that really causes the initial slowdown, but the grade is an insignificant feature in the road’s design. Some signage to alert motorists of the Mavis exit might help.”

Diplacido believes the above-mentioned traffic issues will remain, even if the roadway is leveled out. He noted it’s similar to the Hwy. 401 eastbound exit to Hwy. 404/DVP, but interestingly, a significant grade exists there as well.

A simulation can be done to test these theories, and Lynch said he knows just the people at he University of Toronto who can conduct it and provide a quick turnaround. However, he’d first like to get more companies on-board to either share the cost or just show their support of the need for further investigation. He’s disappointed the province itself hasn’t investigated the feasibility of constructing a viaduct across the Credit River in more detail. He is also calling for an Economic Impact Assessment to be conducted, which would examine the long-term costs and environmental impact of maintaining the current road profile.

The Ontario Trucking Association (OTA) hasn’t gotten involved, since the issue hasn’t yet been brought forward by its members. But Lynch has taken note of the larger trucking companies that regularly pass through the area – SLH and Thomson Terminals, to name a couple – and he’s hoping they can measure the time their trucks spend tied up in traffic between Mississauga and Mavis Roads. If so, he’s hopeful they’ll lend their support to the cause. 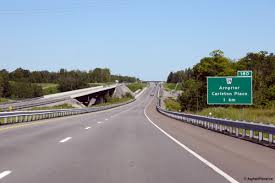 Lynch points to this redesigned roadway near Arnprior as an example where a viaduct was successfully constructed to improve traffic flow and reduce pollution.

“I’m sure some of the (carriers) are pretty savvy and can see how much time a driver is spending on the road and how much fuel they are consuming and can see it takes more to get through there than it should,” he said.

Lynch said he will continue to search for allies to help push for changes to the current design plans. You can view the presentation Lynch made to the Peel Goods Movement Task Force here.

In addition to pushing for a viaduct to be built across the Credit River floodplain, Mississauga businessman Ernie Lynch has some other suggestions he says would ease traffic congestion alon Hwy. 401 through Toronto.

No separation of Express and Collector lanes: “Collector lanes become saturated during rush hour and the express lanes become traps whenever an accident occurs,” Lynch said. “Why not have them all open? If something drastic happens, at least there’s some place for traffic to go.”

Enforce lane usage and limit trucks to the right-hand lane: Knowing this suggestion won’t sit well with commercial drivers, Lynch pointed out traffic is rarely travelling faster than 30-40 km/h anyways, so why is there a need for trucks to travel in the faster lanes? He suggested enforcing rules that would allow faster traffic to travel in the left-hand lane while trucks and other slower-moving vehicles would keep to the right.

Build tiered roads: In places where the 401 can’t be widened, Lynch suggested building tiered roads to add capacity. For instance between Eglinton and Islington, where there’s no room to widen the road, he said collector lanes could be built over top the express and then rejoin later at the same elevation.

Highway reversals: Hannover, Germany, which hosts many major trade shows, including trucking’s IAA, employs full highway reversal each day when shows are opening or closing, so that more lanes can be allocated to the direction in which most vehicles are travelling. This would be especially effective for Hwy. 400 northbound on Friday afternoons, Lynch noted.

12 Comments » for No small bump in the road