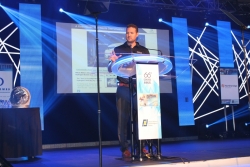 “They [Kodak] were so powerful that they never expected to change anything,” Trevor Milton said in an address to the 66th annual meeting of the Quebec Trucking Association. “Why change something that already works?”

His Utah-based company is certainly looking to reinvent the idea of a Class 8 truck, as it looks to produce a hydrogen-powered electric model known as the Nikola One.

One of Kodak’s main mistakes was that it focused solely on an existing product without considering a changing environment, he told the crowd. “In the event of a war, for example, the liter of diesel could reach five or seven dollars … You’ll never have to pay that kind of money to run the Nikola One.”

Milton also compared the truck’s concept to the arrival of the first smart phones, which also took the marketplace by surprise.

Apple combined the iPhone and iTunes to change the way people purchased music. Nikola One’s monthly payments will include the price of the truck as well as fuel, maintenance, insurance, and even the windshield wipers. The company plans to develop a related network of hydrogen fueling stations, too.

“In the automotive world, emotions sometimes motivate acquisitions,” he said. “But not in trucking. It is only money that dictates decisions.”

“The other companies took a long time to figure out what was happening, and that’s what’s going to happen with the trucking industry,” he said.

Once produced, the Nikola One is expected to travel up to 1,900 kilometers on a single filling of the hydrogen fuel cell system, while delivering 1,000 horsepower and 2,000 lb-ft of torque.

“Other manufacturers are trying to meet the new emissions standards by sacrificing torque and power, but drivers do not want to drive a truck that does not have power,” said the enthusiastic Chief Executive Officer, stressing that his truck will also offer a quicker braking response than its diesel-powered counterparts.

The truck’s batteries will offer a further environmental benefit when they are removed after 1.6 million kilometers of service and sold for a fifth of their traditional price to store solar energy, he said.