As Canadian fleet owners sit down to write their Christmas wish lists this year, new trailers may be one item that’s in popular demand. Hope Santa drives a big sleigh.

Unprecedented demand – mostly in the US – is extending lead times for new trailer builds as used inventory has been snapped up off dealer lots.

New trailer orders reached an unprecedented high in October at 46,267 units, shattering the previous single-month record by 9%, according to data from FTR.

But why should you care? There are a couple of reasons. For starters, demand for new trailers speaks to the general health of the North American trucking industry and overall economy. Don Ake, FTR’s vice-president of commercial vehicles, wrote in a blog over the summer that “the trailer market doesn’t trail – it leads” as an economic indicator.

Ake watches trailer production the same way many economists track the cardboard box market, the theory being that most goods are packaged inside boxes. However, those boxes are in turn loaded onto trailers and with trailer manufacturing’s longer lead times, it provides insight further in advance than cardboard box production can. Plus, cardboard boxes typically only contain consumer goods while trailers of different types reflect demand for commercial building supplies and industrial goods as well.

Ake also argued the trailer market is a more reliable indicator than Class 8 truck orders, which are heavily influenced by federal regulations and improved technologies.

“And what is happening in the trailer market now? Good things, many good things,” Ake wrote. “An analysis of trailer market segments indicates that consumer spending will be strong the next 12 months, and disposable income is growing. Road and other infrastructure spending is expanding at a healthy clip, while housing starts are still moderate.”

The other reason you should care about trailer demand is that it will affect lead times for your own fleet’s orders, which in turn will affect the availability of used and rental trailers. Demand for new trailers is so high, lead times for most manufacturers now sit at four to eight months and whenever a US mega-fleet places an order for a thousand or more units, they get pushed out even further. (Prime Inc. placed an October order with Utility for 2,500 trailers, representing the manufacturer’s single largest order ever). 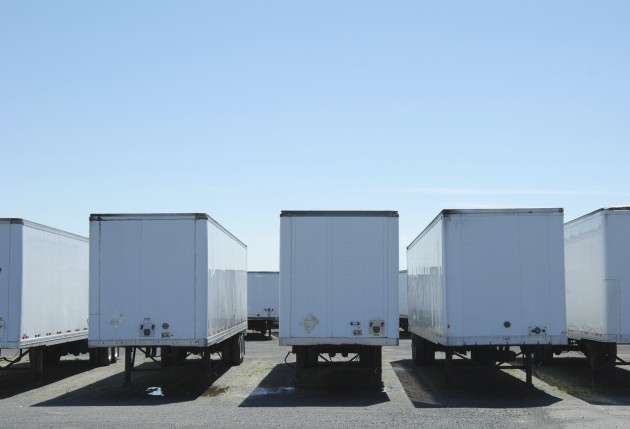 In the past, fleets could turn to the used market to address their immediate needs while waiting for their new trailer orders to come in, but that market too is rapidly evaporating.

“The used trailer market is drying up,” said Nick Lambevski, president of Transport Trailer Sales and the recently installed leader of the North American Trailer Dealers Association. “Normally, if you can’t get new, you rent. And that has gotten busy as well. Rental companies are running at higher capacity. Or, you buy used to tie you over. That really is changing. The US has picked up a lot and we’re getting caught in this. Canadian trucking companies are going to have to wake up and start thinking about 2015 and making plans. In the past, there has always been stuff sitting in stock so if they get busy, they just buy (stock). On the used side, there seems to be more and more sold into the US. (The US) is getting busier and sucking up our used trailers and once they go down there, they’re not coming back.”

Mark Diamantopoulos, vice-president of sales for Trailer Wizards, confirmed that even rental trailers are in short supply.

Trailer Wizards boasts a nationwide inventory of 22,500 trailers and in late November was running at an unprecedented 92% utilization rate. It has been forced to shuffle trailers between its various locations across the country to meet the needs of customers who in some cases won new business, but lacked the trailers with which to service it.

“The US fleets are doing so well they are ordering trailers in large quantities,” Diamantopoulos said. “A thousand or 1,500 trailer (order) in the US pushes out manufacturing dates substantially, especially when we are building 60 trailers a day in one factory.”

The story is the same at every trailer dealer we spoke to for this story.

“Lead times are stretched out more and dealers on the van and reefer side are out of stock across the different lines that they have,” said George Cobham Jr. of Glasvan Great Dane. “We’ve had to tell customers that they need to make a decision sooner than they may have wanted, because when the US market turns on, it bumps production out quickly and it can mean that someone can wait twice as long as they’re used to for a trailer. Some big fleets are even turning to buying stock because production is out so far.”

Buying stock trailers out of dealer inventory – if you can even find stock units – means fleets may not get trailers that are specified to their liking. Many dealers are adjusting to this by stocking higher-spec’ trailers so they can please the more discriminating customers who are resorting to buying stock.

“We’re bringing in more diverse specifications with more technology on them now,” said Cobham. “We’re not bringing in one-size-fits-all trailers. We’re trying to package different spec’s for people who have different appetites for technology.”

This means that at Glasvan Great Dane and other dealers, you’re more likely to find stock trailers with higher-end options such as disc brakes, tire inflation systems and lightweight components.

This is a welcomed change for dealers, who during the recession were selling not just fewer trailers, but more basic spec’s that weren’t necessarily optimized for life-cycle cost and performance.

Conny Weyers, president of Trailers Canada, said he’s encouraged by the renewed focus on high-end spec’s and says it speaks to the trucking industry’s current health.

“When things are tough in this industry, people tend to buy cheap,” he said. “We have seen a definite change in attitude over the past few years. We’ve seen a lot of buying taken away from the accounting people and it’s back to the owner and the shop people – people who really know what they need.”

The tendency of trucking companies to “buy cheap” during the recession is another factor driving the strong demand trailer manufacturers are seeing today, says Tom Ramsden, vice-president of sales and marketing with Manac.

“Back in 2009 the trailer industry experienced one of the most dramatic decreases in new incoming orders. The pressure to cut costs was paramount and for the most part the easiest way to accomplish this was to remove what some considered to be ‘nice to have’ options on trailers,” he explained. “Fleet managers were being pressured by upper management to do their part by cutting specifications and in essence buying cookie-cutter trailers and now, five years later, our customers are seeing the effects of these cuts to their specifications through increased maintenance costs.”

Planning for demand in a cyclical, at times volatile, industry such as the trailer market takes some skilful planning and risk-taking by dealers.

“We brought in more stock this year than any year in the past – almost 30% more – and at the time I thought, how are we going to sell all this gear?” said Cobham. “Starting in February, it just turned right on.”

Canadian fleets, whose modest orders are typically dwarfed by the thousand-plus trailer orders from the big US fleets, may need to become more strategic in predicting their trailer requirements and getting their orders in earlier than in the past, at least while demand remains high.

“Customers are being forced to assess their 2015 trailer requirements well ahead of time to ensure that they have equipment available to them for the coming year,” Ramsden said.

Lambevski suggests Canadian customers spread their orders out across the year. This also helps protect against swings in the value of the Canadian dollar. A large order placed when the Canadian dollar is low could prove to be a costly mistake if the dollar rebounds soon after.

When it comes to planning, there are lessons to be learned from the tanker trailer industry, he added.

“In the tanker business, they place orders well in advance. They will do their budgets in July-August and place orders in September-October for spring delivery,” Lambevski explained. “The bulk of their buying is done and if they pick up a contract they weren’t expecting, they can buy out of stock.”

Tanker fleets tend to take a more strategic approach to ordering new trailers, in part because the trailers can cost nearly as much as a new power unit. While a van trailer can cost $25,000-$35,000, a pneumatic tanker can run $120,000 or more.

“They do have to get more strategic,” Lamebvski said of today’s van fleets. “Their other options are disappearing. Used trailers and rental supply are tightening.”

Trailer Wizards’ Diamantopoulos said many of the large Canadian fleets are good at planning their trailer requirements and getting orders in early. But smaller fleets tend to struggle with this and when you have a limited number of trailers to begin with, landing a new contract can suddenly leave a small fleet in desperate need of trailers.

Like Glasvan Great Dane, Transport Trailer Sales planned for the uptick in demand as well as it could. But it’s risky to build inventories in anticipation of demand that can subside as quickly as it spiked.

Lambevski said his company will continue to be aggressive in bringing in new inventory.

“We have to be aggressive, at least through 2015,” he said. “All indications are it’s going to stay busy. Lately, those who have stock and have been aggressive have been rewarded. But I’ve also been on the other side of it. When things die, they die quickly and at that time, whoever doesn’t have trailers on the ground is winning.”

While demand for dry vans seems to be outpacing that for all other trailer types, sales have also been robust for flatdeck and tanker trailers. Float and dump trailer demand has been more constrained.

If there’s a silver lining to depleted inventories and pent-up customer demand for new trailers and purchase inquiries gone unfulfilled, it’s that Christmas this season will be extra special for trailer dealers anxiously awaiting the arrival of 2016 model year units.

Next month, Truck News will examine in more detail how new trailer spec’ing priorities are evolving and highlight the options receiving the most attention.