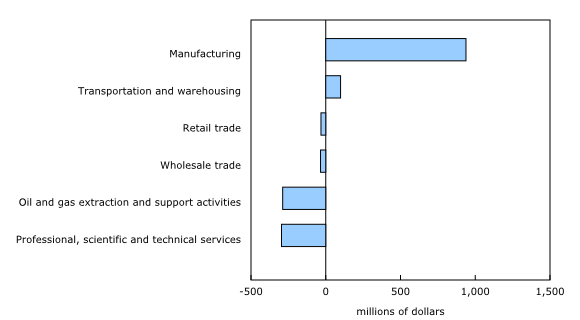 OTTAWA, Ont. – Canada’s transportation and warehousing sector saw operating profits increase $99 million in the first quarter of 2018, Statistics Canada reports. That compares to a $938 million gain in the manufacturing sector.

In contrast, retail trade saw the profits erode $32 million, with wholesale trade down $35 million, oil and gas extraction and support activities down $288 million, and professional, scientific and technical services down $296 million.

The decrease in retail numbers were led by motor vehicle and parts dealers, which were down 7.3%, but that was partially offset by a 14.7% gain in the operating profits of food and beverage stores.

Eight out of 13 manufacturing industries reported operating profit increases. Primary metal manufacturers saw strong gains thanks to copper prices at a four-year high, and zinc prices reaching a 10-year high. Things were less robust among those making air, rail and ship products, leaving that sector down a collective 35%.