SASKATOON, Sask. — With the future of trucking up in the air and the industry’s many flaws constantly in the spotlight, it’s refreshing when a company is sanguine about what’s ahead in transportation and is genuinely excited to be running trucks.

Q-Line Trucking began in 1994, after the Quiring family noticed the local demand for the transportation of agriculture goods and equipment. The company is currently run by Reg Quiring, a young gun who understands not only how to run a successful corporation, but how to keep his staff smiling. 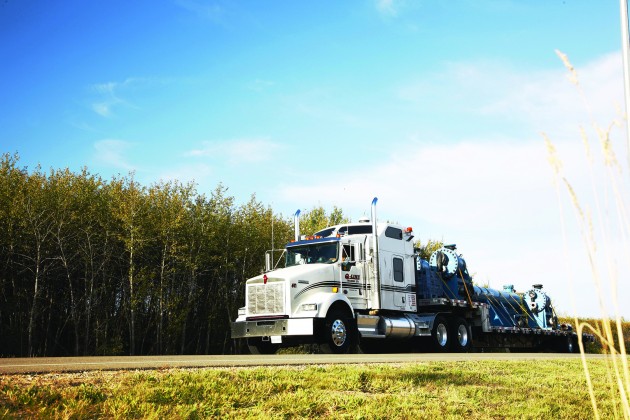 More than 20 years have passed since its doors first opened and the small family-owned business turned into a corporation with locations in Saskatoon, Sask., Winkler, Man., Milton, Ont., Edmonton, Alta., and Bettendorf, Iowa.

Today, Q-Line has more than 500 employees (400 of which are drivers), more than 350 power units and 730 trailers across all five of their locations. To say business is going good is an understatement for the company as it seems like these guys have it all figured out and operations run like a well-oiled machine.

Part of the company’s success can be attributed to the type of freight they haul.

“We haul anything that goes on an open deck,” joked Maynard Friesen, deck fleet manager of Q-Line Trucking, Saskatoon.

“We have a deck fleet and bulk fleet,” added president and CEO, Quiring. “The bulk fleet is based on servicing industrial and agricultural clients so we haul things like grain and fertilizer and potash, and that sort of stuff – it’s dry bulk commodities. In numbers of trucks, it’s about 25% bulk, 75% deck.”

There is no shortage of agriculture goods in Saskatchewan, so things are constantly moving at Q-Line. Quiring even says the amount of the freight they haul acts as a retention tool, since the company boasts an above-industry average turnover rate.

“We’re fortune enough to have a good customer base on the bulk side and on the deck side where we have a lot of freight and we’re really busy,” he said. “That’s probably the best retention tool we have.”

Lots of freight alone though isn’t the only thing going for the company. It was evident when walking through the doors that Q-Line isn’t just a corporation whose employees are forced there every day from 9-5, rather they act like one big family who just happen to work in the same building. This family extends to the drivers, according to the senior staff, and could be the reason for why their drivers are sticking around.

“I expect drivers are saying here because we’re still a company that recognizes the drivers are important,” said Friesen. “A comment was made (at a recent meeting) from a driver who said, ‘The minute you put a half door on a wall and I can only see people in the distance, that’s the day I quit at this company.’ This company has the mindset that a driver is welcome in this office as any other office staff, it’s always been that way. It trickles down to how drivers are treated. They feel that they are a part of this company and that their opinions do matter.”

Quiring added that his staff is reminded daily of the importance of the drivers.

“All our office staff and all our operations staff are preached to on a regular basis that without a driver in a truck hauling freight, none of us have a job and none of us will be successful,” he said. “We put a lot of onus on our drivers but we give our drivers a lot of respect.”

Brock Girling, safety and compliance manager for Q-Line added: “I think too, what we have that other companies don’t have is we’ve got a good support system in the event that something occurs, whether it be a death in the family or illness.”

The company boldly stated that the driver shortage, which is currently crippling the industry across North America, isn’t really affecting them just yet.

“We’re not taking drivers fresh out of driver’s school,” said Quiring. “We’re taking drivers that are a little older and have more experience. So, do we have a driver shortage? Yes. Is it crazy bad for us right now? No. But the demographics point out that we will and that it will become more difficult as time goes on.”

Friesen said that at the moment all the trucks at Q-Line are full, but this could change as more drivers move to retirement.

The company credits its training and retention programs and commitment to safety as reasons for not being hit by the shortage of drivers in the industry.

“We really value training,” said Girling. “I remember when I first started, they had a day-and-a-half long orientation for new hires. Now orientation lasts an entire week. We’ve seen an improvement in all aspects of business. A lot of drivers come in thinking they know everything they need to but they always walk away with learning something new or having a new tool they can use when they go out on the road.”

The company also mandates annual training, which drivers can take in person or online and gives new hires the option to participate in the mentorship program offered throughout Q-Line.

“There’s a couple ways you can deal with safety,” added Quiring. “You can do it with a stick, where you can punish someone or you can reward them. So we kind of do both in that all the drivers know there are consequences to their actions.”

Girling added that good drivers are given annual service awards and the company is a big believer in safety bonuses.

“It’s not just that you get an award and it’s put in your mailbox,” he said. “We recognize them at company functions, normally at the Christmas parties. We also give out safety bonuses to our drivers. Obviously it pays well because we’re not having as many infractions as we used to. It’s not only beneficial for them, but for the company as well.”

Maintenance and equipment was also on the top of the list when asked why drivers are staying put.

“Another really good retention tool we have is we have really good equipment,” said Quiring. “We’ve got new trucks for company drivers. That’s a big deal. Our trailers are well maintained. We’ve got a large maintenance facility here that’s staffed by 40-plus people and that’s a big deal for drivers to know that the trailer he’s pulling is well maintained and clean it’s in good running condition. It’s not a concern for them.”

Q-Line’s service maintenance is, for the most part, done all in-house and seems to be working well for the company.

“Our equipment is on a scheduled maintenance program and it’s not random,” said Friesen. “It is all on a schedule. It is maintained daily by our staff consistently so things can be taken care of before breakdowns happen.”

But, as many in the industry know, it’s not all smooth trucking. Quiring says that even though the company isn’t feeling the driver shortage, there are still things that need changing in the industry and province, like legislation and infrastructure.

From a legislative standpoint, Quiring said he’d like to see Canada, province to province on the same page when it comes to rules on the road.

“I’d want to get all the provinces unified in how they do things,” he said. “Whether its safety ratings or weights and measures and dimensions. We do a lot of over-dimensional freight so for instance in a load that is over-width that requires an escort vehicle in Alberta at 12-ft-7, at Saskatchewan its 14-ft-1 and Manitoba its 15-ft. So who’s the safest?”

Girling chimed in saying that the legislation is also a pain to drivers who need to know these changes on the fly.

“They have to know all the regulations when they’re out on the road,” he said. “Whether it’s one province to another province even as something as small as the over-dimensional sign has to be changed because they all have different wording.”

Infrastructure was a sore spot for Quiring prefaced his thoughts about the province’s roads saying, “Saskatchewan’s roads need to be repaired and don’t get me going on highways because I might not stop.”

“Our highways were made primarily in the 1960s and 1970s when trucks were half the weight they are and drove a quarter of the miles they drive now,” he continued. “They are not designed for the volumes we have now and the weights we have now and it’s tough. Highways are crumbling across Canada but we really feel that we have legitimate challenges in Saskatchewan when it comes to our roads.”

Quiring hinted that the company is planning to grow its business, though it would rather stick to progressing organically (the company purchased Ray’s Transport back in 2006) because as a whole, the company “likes the culture we’ve developed here and we feel that we can take advantage of our culture by growing internally.”

His hopes for trucking are rather upbeat. “I’m always optimistic, for the simple reason that I think we live in a great country with currently the best economy in the world; if you want to be in business in transport why not be in the greatest country in the world with one of the best economies in the world?”