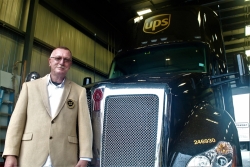 VAUGHAN, ON – When the road is your office, every day holds the potential for trouble, but UPS’s Circle of Honour members navigate it flawlessly.

Sixteen new members from Southern Ontario were inducted into the elite driving group July 27, recognizing each driver’s 25 consecutive years of service with the delivery company without a single at-fault incident on the road.

A ceremony held at the company’s Vaughan warehouse also recognized three drivers with 30 years accident free, and one driver with 35 consecutive years with no incidents. The morning’s festivities took place in a special edition of the drivers’ morning meeting and were attended by the Ontario minister of transportation, Steven Del Duca, and president of UPS Canada, Christoph Atz.

With a fleet of 2,800 vehicles in Canada, and more than 12,000 employees across all departments, the exclusive group of outstanding UPS Canada drivers will be 180 strong by the end of 2017.

For Peter Bartolac, who has 25 consecutive years with no at-fault accidents in a 31-year career with UPS Canada, the ceremony was a welcome reminder that his hard work is noticed.

“You work all these years, to get appreciated, it was nice,” he said.

Bartolac works at Pearson International Airport delivering to the shops, restaurants, and airlines there. He says the job is rewarding because he loves his customers, some of whom he has known for the whole of his 31 years on the job. Many of the locations he serves are family-run businesses, and he’s enjoyed watching them grow.

“It’s the satisfaction of going out and making my customers happy,” that makes the job worthwhile, he said.

In a speech at the ceremony Del Duca joked that as a young driver he couldn’t have imagined staying 25 months accident free, let alone 25 years.

His second time presenting the awards at the annual ceremony, Del Duca said he loved the opportunity to participate.

“It’s fantastic,” he said. “Twenty-five, and in one case 35 years accident-free. That’s kind of Mind-blowing.”

In addition to a special UPS blazer with a commemorative crest, all 20 honorees were taken to a Blue Jays game Thursday afternoon and given a team jersey with their name and the number of accident-free years they’ve had stitched on the back.

To mark Canada’s 150th birthday, UPS is also releasing a series of commemorative envelopes, each with a photograph of one of 150 existing members of the Circle of Honour program.

“UPS has a commitment to our customers and the communities in which we live and serve. The Circle of Honour acknowledges those UPSers who go above and beyond to keep the streets safer for those around them,” said Atz.

Previous inductees being recognized for 30 years with no accidents were Gary Ethier, John Vanthournout, and Marty Fralick. Glenn Ross was recognized for 35 years of safe driving.

Kevin Richardson, with a 34-year safe driving record, was also celebrated at the event for receiving The Kaplan Safe Driver of the Year Award.