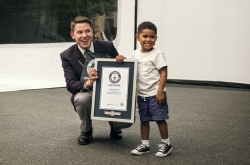 Joel was presented with a 80x14x18-foot box, and opened it up to reveal the new line-haul tractor. His reward in addition to the record came in the form of a firsthand look and a ride … with a decidedly older driver at the controls.

To secure the record, the box had to enclose the entire truck and be opened manually without tools. The truck itself also had to be removed without destroying the box, which had to be made of traditional cardboard and cellophane.

You can watch the record be broken at www.youtube.com/watch?v=r7S2FByIG2A.

The record-setting reveal was filmed May 12 in Charlotte, North Carolina.

Watch www.todaystrucking.com for complete coverage of the new VNL.