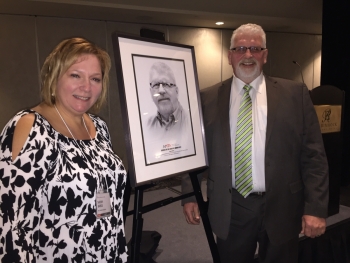 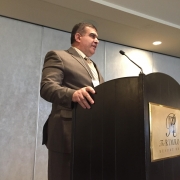 Kassab Radwan wasn’t able to continue his career as a teacher that was established in the Middle East, but by applying his expertise in the trucking industry earned him the title of Alberta Safety Person of the Year.

Radwan began working for Westcan Bulk Transport when he came to Canada, and applied his teaching background as a driver trainer for nine years. He worked in roles including safety supervisor, training coordinator, and manager of driver development, which had him overseeing programs such as an international driver recruitment program. Most recently it has been manager of compliance and training.

“I’m a very small piece of a very energetic, big team,” Radwan says. “I have people in my life who brought me to this point, and I cannot afford to share [the honor] with the team.”

He held his highest praise for Dan Columbus, the fleet’s vice president of safety. “I might be elected or nominated or selected as the Safety Person of the Year, but this gentleman, I call him the safety manager of all time,” he said.

John Robinson, a 41-year driver who has spent most of his career with the fleet, was named Alberta Driver of the Year. During his career, he has accumulated about 5.5 million kilometers at the wheel.

Gene Orlick, who is concluding his term as association chairman this year, collected his second Service to Industry Award during the event. He has been involved in the association since working for Orlick Transport, which was run by his father and uncle. He and his wife launched Orlicks Inc. in 1995. And he is the current chairman of the Canadian Trucking Alliance.

Orlick earned the honor the first time in 2009, after a term as association president.

Entrepreneur and philanthropist Carl Rosenau, who led Rosenau Transport for almost 30 years before retiring last year, was presented with the association’s Historic Award. 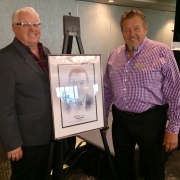 Terry Warkentin of Cummins Sales and Service was awarded the Associate Trades Award. He first entered the trucking industry in 1977 with Kenworth at a former manufacturing plant in Burnaby, B.C. After briefly operating a coffee shop in Vancouver in the late ’80s, he returned to the industry and has remained there ever since. He has held roles with Kenworth, Volvo, Calgary Heavy Truck and Collisions, and Cummins, where he is now territory account executive.