As the official media sponsor of the Ontario Truck Driving Championships (Twitter hashtag: #OTDC), Truck News is profiling some of the of the drivers participating in the regional events which are being held on June 14 in Toronto and Cambridge. We’ll be following these drivers on course, and letting you know how they do as they compete to move on to the Provincial championship.

Here are the final two drivers:

Past experience: In 2013, Matheson placed third in the tandem-tandem class, but he is used to finishing a little higher up the rankings. Matheson has attended the Nationals three times, and has a record of two second-place finishes and in 2012 he not only won his class, but walked away with the title of overall Grand Champion.

Background: Matheson started competing in the driving championships when he was 23. Now 32, he recalls that he was nervous about entering his first competition.

“My previous boss said ‘you should go in it.’ But I didn’t know what to expect. You think everybody would make fun of you if you mess up, but that’s not the case. Everybody becomes good friends. Everybody roots each other on. Most guys stay until the last tractor goes—at least most guys do. If they are good enough to watch you go and watch them, it just shows your respect if they’ve got the courage to go.” 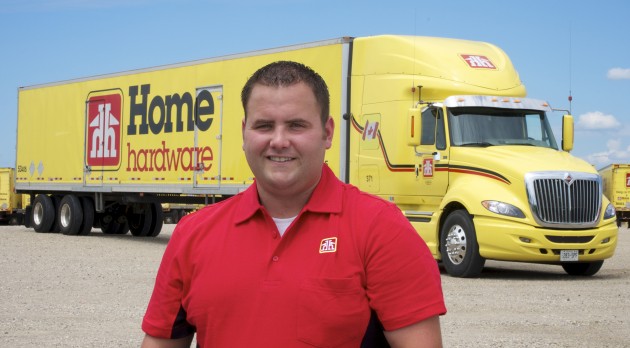 Getting to know other companies and other drivers has been one of the major benefits from competing in the driving series. Matheson said that when he applied for his current job, his future boss Dennis Shantz director or fleet services for Home Hardware Stores Limited, already knew his name from having watched Matheson compete in the championships. Even beyond being beneficial at work, however, the championships have given him a chance to make friends.

“Over the years I’ve become good friends with drivers from a lot of different companies. Just going to the Nationals three times with other companies’ drivers, you become friends with them. You see them on the highway, you go out of your way to go over and speak with them. That’s why I really enjoy it. You meet some great people.”

Matheson said he doesn’t really have any time to practise before the events, outside of the everyday driving he is doing for Home Hardware. While he jumps behind the wheel of a lot of different trucks, most often he pulls B-trains through northwest Ontario. He said driving a variety of vehicles keeps his skills sharp, but while he has considered entering the B-train class, he really enjoys competing in the tandem-tandem division.

What he tends not to enjoy as much is waiting around for the results on competition days.

“The anticipation is very stressful if you think about it too much. My worst time of the whole day is waiting until the night time call to announce who has won. That’s when I get my butterflies: when they are calling third, second, first. You have no idea of the results.

“I never predict how I did. There are inches in some of the obstacles. It’s really challenging for sure. One point could separate the top two. It’s that close sometimes.”

The other part of the day that can make Matheson nervous is the pre-trip inspection stage, but he doesn’t let the nerves affect his performance.

“Being with the MTO officers and doing the pre-trip, I know it’s a little intimating because they’re standing their with their clip boards, and they’re the law, but they’re just there to help you along too. If you find the defects, it’s a pretty good feeling when they tell you you’ve got them all. That’s hard to do.

“I’ve got the safety award a few times. One year at the Nationals they didn’t even have a prize for it because nobody had ever got them all. So they made a speech about me getting them. They were kind of embarrassed because it had never happened. I’ve never seen it since. It was nice of them to recognize that. It could be as a small as a little bolt off a seatbelt strap. You have eight minutes to go around that vehicle, and if you are unfamiliar with it, it’s pretty tough to do.”

As well, he said the championships are a good opportunity to show employers drivers know how to be team players.

“It shows what kind of character you have if you’re willing to go represent the company.

“I think it helps your everyday. You’re always on your toes. Safety on the highways is huge now. I mean my family travels on the highway too, and I’ve got somebody else’s family on the road beside me.”

Past experience: Nijjar has competed in the Truck Driving Championships for six consecutive years.

In 2009, in only his second year competing, he was the won first place in the Regionals and placed third overall in Ontario earning him the title of Rookie of the Year.

His best results came in 2011 when he placed first in both the Regional and Provincial levels, which meant a trip to the Nationals in Calgary, Alta. He placed second by the closest of margins, as just one single point separated the top two finishers.

Most recently, Nijjar won his class and took the title of Grand Champion at the 2013 Toronto Regional competition. 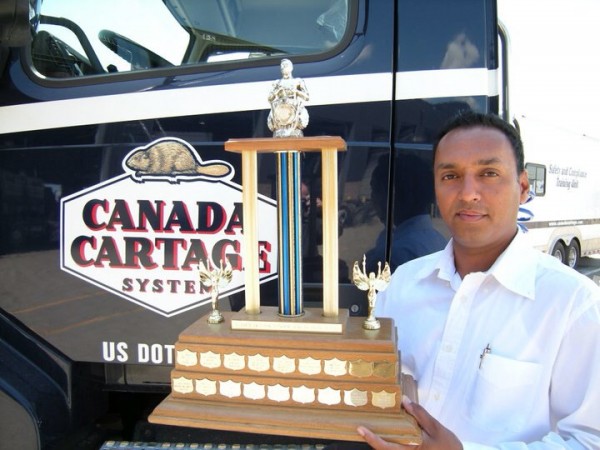 Background: Nijjar has been a professional driver since 2002. This coming July will mark his eighth year with Canada Cartage.

Nijjar said he entered the trucking industry because driving was always a passion.

“Driving was kind of my hobby,” he said of the time before he became a professional trucker. “A few of my friends were drivers and it seemed challenging so I got interested in it.”

What he thinks about the Championships: Nijjar says he really looks forward to the Truck Driving Championships weekends.

“It’s my favourite weekend of the year,” he said.

Though many find the pre-trip inspection the most daunting part of the day, Nijjar says it is his favourite part of the competition because he enjoys a challenge.

Since he finds the day both fun and educational, Nijjar added that he encourages other drivers to get involved.

“When I talk to other drivers, the only reason for their hesitation is people are scared to lose,” he said.

“But I tell them, you are not there to win or lose—you are there to learn. If you compete, you learn a lot and you improve your skills. You do your pre-trip inspection every day, for example, but you’ve never done it in the presence of an MTO officer. It’s a learning experience, I’m never thinking about just a trophy.”